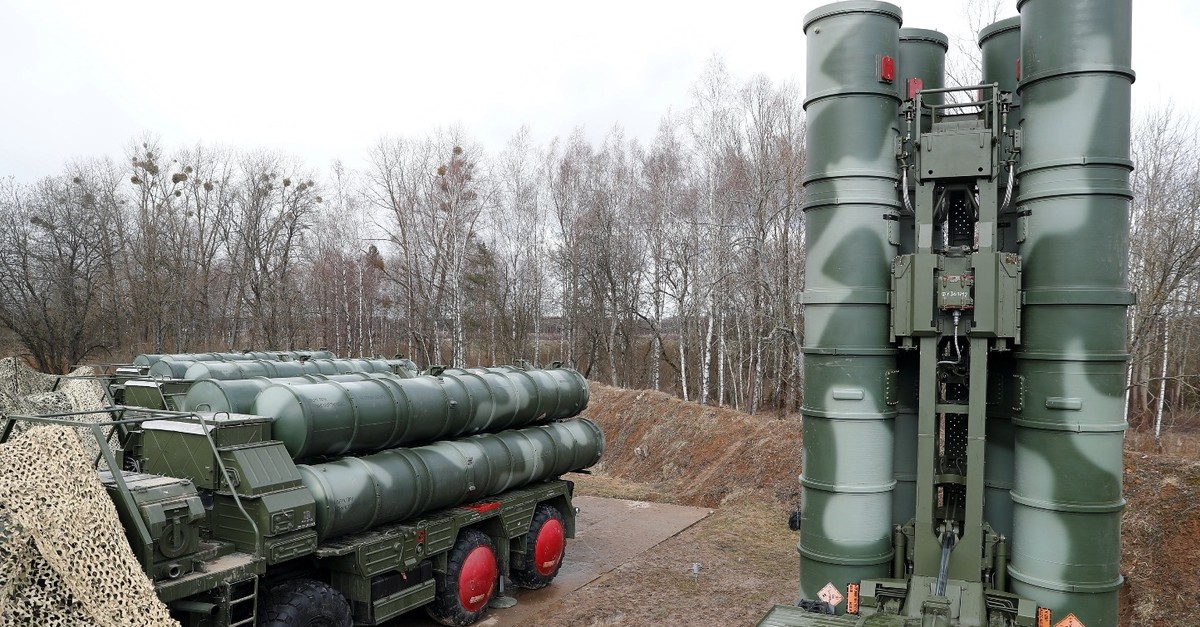 A step back on Turkey's purchase of S-400 defense system is out of the question and it is a done deal, according to President Erdoğan, who said Ankara will jointly produce S-500s with Moscow

President Recep Tayyip Erdoğan late Saturday once again said the purchase of an advanced Russian missile defense system was a done deal, reiterating the country's commitment to the agreement with Russia, adding that Ankara would also engage in a joint production of the next generation S-500 with Moscow. "It is definitely out of the question for us to step back on the issue of S-400s, it is a done deal," President Erdoğan said in a televised question and answer session with university students in Istanbul.

"Our deal was to have the S-400s delivered to us by July; they will probably bring that forward." Washington has been pressuring Turkey to reappraise its decision to acquire the advanced S-400 Russian surface-to-air missile (SAM) system, arguing that the system could risk the security of some U.S.-made weapons and other technology used by NATO, including the F-35 fighter jets. However, Erdoğan said Turkey carried out technical work amid U.S. concerns over the compatibility of the S-400s and the F-35s but found that such a problem did not exist. While Washington has warned of potential U.S. sanctions if Ankara moved forward with the S-400 agreement, Turkey has said it would not back down from the deal. Instead, trying to form a cooperative platform to efficiently operate its S-400 system, Turkey suggested a joint technical group with NATO, but its major partner, the U.S., has not responded so far.

Washington has pointed out that the S-400 step would trigger the Countering America's Adversaries Through Sanctions Act (CAATSA). Another contentious issue for the purchase is the U.S. stressing reassessment of Ankara's participation in the F-35 fighter jet program and other potential future arms transfers to Turkey. "They (the U.S.) are passing the ball around in the midfield now, showing some reluctance. But sooner or later, we will receive the F-35s. The U.S. not delivering them is not an option."

Reiterating its determination to complete the deal, Ankara has said on a number of occasions that it was a decision made against external security threats. Turkey has been trying to explain to the United States and other partners in the F-35 project that the S-400s would not pose a threat to the jets.

"The S-400 is a defensive system and has a long range. As for the payment plan, Russia has given us very suitable conditions," the president noted. "After the S-400s, the S-500s are also considered, and there will be coproduction of S-500s as well," he added.

S-400 not to be integrated into NATO system

Also speaking of the S-400 in a live broadcast on Kanal 7 yesterday, Presidency of Defense Industries (SSB) Chairman İsmail Demir said, "We are concerned with the technical dimension of the work in the S-400 and F-35 projects. The S-400 will not be integrated into the NATO system. When necessary measures are taken, the S-400 will not be a threat to NATO." Demir also said they expect the S-400s to be operational this year.

The minister's remarks came during his visit to an air base in eastern Malatya province where F-35 jets will be deployed. "We are setting up an area for the activities of the F-35 here," Akar said, adding that some parts of the jets were being produced in Turkey. In June 2018, Turkey received the first two F-35 fighter jets in a ceremony held in Texas, and Turkish pilots started training at Luke Air Base in Arizona. Despite several attempts by U.S. senators to halt the delivery, Turkey received two more jets in April and now has four jets in its possession with four pilots continuing their training program.

The jets will remain in the U.S. for training activities and will be shipped to Turkey by November 2019. The country is expected to receive six F-35 jets by 2020. It will receive the remaining 24 jets in the first 30-jet order package by 2024. The country initially ordered 100 F-35 jets.

Turkey has been a partner in the F-35 Joint Strike Fighter project, a consortium of nine countries, since 1999. The Turkish defense industry has been playing an active role in the production of the fifth generation F-35 fighter jets, and the country has spent $12 billion on the project so far.