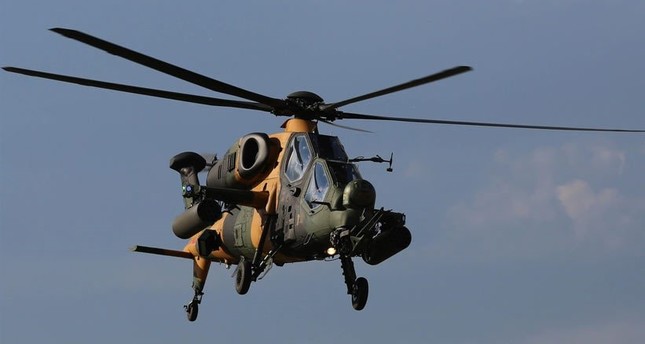 The T129 Tactical Reconnaissance and Attack Helicopter (ATAK) is one of the air platforms on duty in Turkish army's Operation Claw continuing in northern Iraq.

The domestic defense industry has proved its ability to facilitate the Turkish's army's counterterror operations both at home and abroad. Locally developed defense platforms have played a significant role in the success of operations in northern Syria – Euphrates Shield and Olive Branch – that Turkey carried out against terror groups, including Daesh and the PKK's affiliate, the People's Protection Units (YPG), to thwart national security threats. A wide variety of air and land defense platforms are deployed in Turkey's ongoing Operation Claw being carried out in the Hakurk district of northern Iraq to eliminate threats from the PKK since Monday – a terror group designated by the U.S. and the European Union.

Bayraktar TB2 UAVs have played an active role in detecting, diagnosing and neutralizing thousands of terrorists to date. Developed and produced nationally and originally with electronic, software, aerodynamic, design and sub-main systems, it stands out as the world's most advanced UAV system in its class with its flight automation and performance. It boasts a record altitude of 8,239 meters (27,030 feet) for over 24 hours in the air, can carry 150 kilograms (330 pounds) of cargo and can be operated day and night.

Another UAV developed by the Turkish Aerospace Industry (TAI), the ANKA-S, is also on duty collecting intelligence and providing assistance for the operation center to precisely aim at targets and locate hostile elements. The ANKA-S System, designed according to international safety standards with the integration of new generation utility loads and domestic resources, has taken its place in the inventory as one of the most competent systems in its class, having national flight control, aircraft control computers, national IFF (Identification Friend and Foe) and safety and operational capability.

Having proven its capability in previous counter-terror operations, the domestically developed T129 Tactical Reconnaissance and Attack Helicopter ATAK is another air platform deployed in Operation Claw, boosting the target-attacking capabilities of the Turkish army.

Developed by Turkey's leading defense industry firm TAI, the ATAK is a new generation, tandem, two-seat, twin-engine helicopter specifically designed for attack and reconnaissance. The ATAK is based on the combat-proven AgustaWestland A129CBT, but the new aircraft incorporates a new system philosophy with a new engine – the LHTEC CTS 800-4A – new avionics, sight systems and weapons, a modified airframe, an uprated drive train and a new tail rotor.

Soldiers in the land forces who participate in Operation Claw use the infantry rifle MPT-76, developed and produced completely by national facilities without using technical support from abroad. The infantry rifle the MPT-76 has passed all the toughest NATO-standard tests such as cold and hot air, sand, rain and mud without errors.

The rifle can be fired semi-automatically and automatically, with a 20-bullet magazine capacity. The MPT-76 can be customized through its rail system, meaning it is compatible with accessories – including a night vision riflescope - that can be added or removed as needed.

Domestically developed by Turkey's leading defense firm ROKETSAN, the surface-to-surface long-range missile Bora has been used in Operation Claw for the first time.

"Terrorist targets in Qandil, Asos and other locations were hit by domestically-produced land fire-support weapons for the first time," Defense Minister Hulusi Akar said on Wednesday. The Bora missile was fired from the military unit in the Derecik district of Hakkari province and precisely hit the targets. The Presidency of Defense Industries has been working on the project since 2009, and Turkish defense contractor ROKETSAN was charged with development and production of the missile system.

Bora was previously introduced in February at the Dubai International Defense Exhibition and Conference (IDEX) 2017, the largest defense industry fair in the Middle East. Although the missile is known as "Bora" in Turkey, it was promoted in the international arena for export as "Khan." The missile has a 610 mm radius and weights 2,500 kilograms with a range over 280 kilometers. It can provide mass firepower on high payoff targets with

in the area of influence of the army. The KHAN Missile provides high lethality depth by means of its long range. The Kasırga multi barrel rocket launcher system has also been deployed for the first time in the latest operation in northern Iraq. The T-300 MBRL system is capable of firing at critical targets within a range of over 100 kilometers.

Share on Facebook Share on Twitter
Previous in Defense Heated relations between Ankara and Washington caused by the conflict... Next in Defense A Saudi cargo ship has left the southern French port of Fos-sur-Mer...
DAILY SABAH RECOMMENDS