Russian S-400s due to arrive in Turkey next month 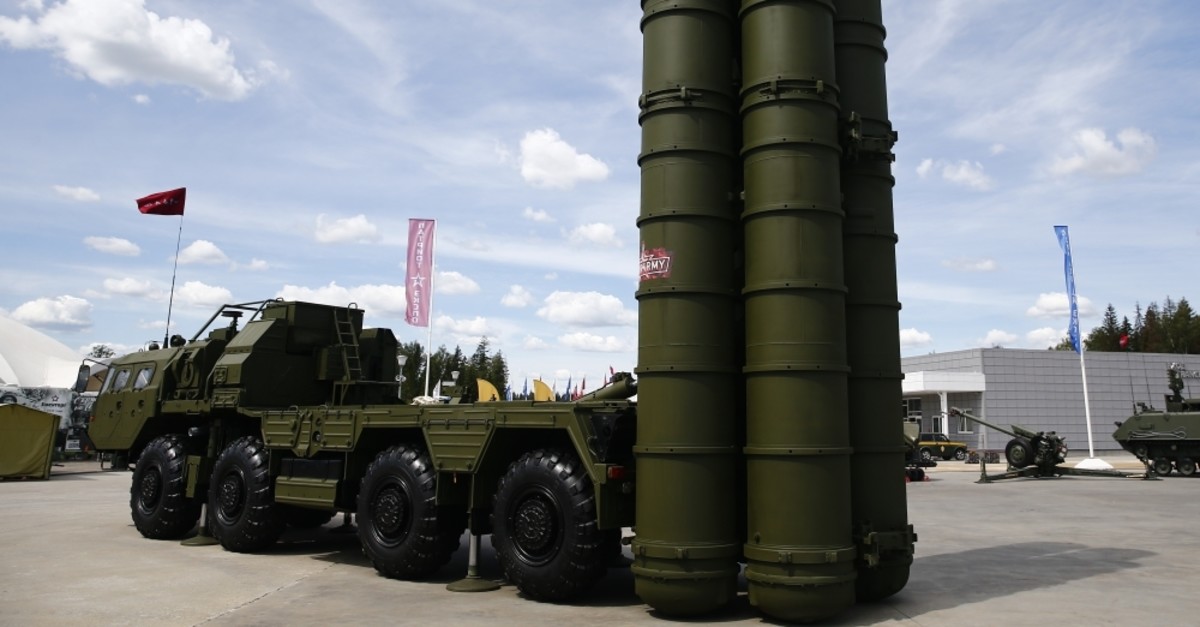 With only days left for delivery, Turkey has once again expressed its resolve to honor its deal on the Russian S-400 defense missile system, strongly emphasizing that the move to purchase any defense system is a sovereign decision

Turkey's decision to purchase the Russian-made surface-to-air defense missile system has caused tension in its relations with the U.S., which claimed that the purchase will jeopardize the operational security of the next-generation F-35 Joint Strike Fighters, a multinational NATO defense project in which Turkey is a major manufacturer. However, on every occasion, Turkey has argued that it will not back down on the deal and buying the Russian defense system is a matter of sovereign decision-making.

Currently, Turkey and its partners are waiting for the delivery of the S-400 order next month.

In his first public address after the elections at the ruling Justice and Development Party (AK Party) parliamentary group meeting yesterday, President Recep Tayyip Erdoğan once again stressed that Turkey will begin receiving its order of Russian S-400 air defense systems in July.

"We will hopefully start receiving the S-400 air defense systems we ordered next month," he said.

With more emphasis on the S-400 issue, the president emphasized that the decision to purchase the Russian-made missile system is directly related to Turkey's sovereign rights.

"We will not take a step back from this," he added.

"Turkey has been firm and uncompromising in its decision to purchase the S-400," he said, noting that the military and technical cooperation between Turkey and Russia continues in a positive way.

The Russian minister also stressed that a number of other nations are also interested in buying the S-400. Russia began China's S-400 order a short while ago, Manturov said.

"Our deal with China was inked in 2015, but its details have not been disclosed. The S-400 delivery to China will continue according to the schedule specified in the agreement," the minister said.

Turkey has been at loggerheads with the United States for months over Ankara's planned purchase of the Russian missile defense system. Washington warned Turkey it would be excluded from the F-35 program and could face sanctions unless it scraps the plan to buy the Russian S-400.

President Recep Tayyip Erdoğan said last week he did not expect the U.S. to impose sanctions on Turkey over its purchase of the S-400. Erdoğan said the U.S. should think very carefully before imposing sanctions and if it goes ahead and does so, Ankara will retaliate.

Regardless of U.S. commentary or any decision to impose sanctions on Turkey, Ankara has already bought the Russian S-400 missile defense system, Foreign Minister Mevlüt Çavuşoğlu also said on Monday.

Meanwhile, the U.S. envoy to NATO said yesterday that they will stop Turkish forces from flying and developing its F-35 stealth jets if Ankara goes ahead with the purchase. Washington and its allies have urged fellow NATO member Ankara not to install the S-400 system, saying that it would let the technology learn how to recognize the F-35s, which are built to avoid tracking by enemy radars and heat sensors.

"Everything indicates that Russia is going to deliver the system to Turkey and that will have consequences," Kay Bailey Hutchison, the U.S. ambassador to NATO, said in Brussels.

"There will be a disassociation with the F-35 system, we cannot have the F-35 affected or destabilized by having this Russian system in the alliance," she told reporters.

Turkey produces parts of the F-35s fuselage, landing gear and cockpit displays. Hutchison said Ankara was an important partner in that production but that security concerns about Russia were paramount. "So many of us have tried to dissuade Turkey," she said.

However, Turkey's purchase of the S-400 is not only a "security" concern of the manufacturers. Last week, a British media outlet Sky News report revealed that a Chinese-owned company is making circuit boards for the top-secret next generation F-35 warplanes.

Exception PCB, a printed circuit board manufacturer in Gloucestershire, produces circuit boards that "control many of the F-35's core capabilities," according to publicity material produced by the U.K. Ministry of Defense. The British manufacturer was acquired by Shenzhen Fastprint, a company based in China and listed on the Shenzhen Stock Exchange, in 2013, the report said.

Defense experts, including former defense ministers, expressed woes over the fact that a Chinese-owned company is producing crucial parts for such a classified defense program because of long-standing fears about Chinese espionage and rivalry. The Chinese state has long been accused of seeking to steal details on the multi-billion-dollar F-35 program, headed by U.S. defense giant Lockheed Martin.

The U.S. offered Turkey the more expensive Patriot anti-missile defense system, and then with a discount, but there were issues with the U.S.' ability to deliver the Patriots quickly. Turkey also says that NATO allies have not helped it during times of heightened security concerns, and it therefore had to seek alternatives, and Russia came into the picture. Following protracted efforts to purchase an air defense system from the U.S. with no success, Ankara decided in 2017 to purchase the Russian S-400s.

Germany and the U.S. stationed Patriot surface-to-air missile batteries in Turkey on a temporary basis in 2013 but moved them out in 2015, citing demands on assets elsewhere.

Ankara has repeatedly said it was ready to discuss Washington's concerns. It proposed forming a joint working group with Washington to assess whether the S-400s would pose a threat to NATO; however, the U.S. has not taken any steps to form the technical team. Turkey has responded that it was the U.S.' refusal to sell Patriots that led it to seek other sellers, adding Russia offered a better deal, including technology transfers.

Erdoğan last week denied that Washington offered Turkey a "good" deal that would allow it to purchase U.S. Patriot systems instead.Erdoğan is expected to discuss the issue with U.S. President Donald Trump at the G20 summit in Japan later this week. One senior NATO diplomat said that was probably the last chance of finding a solution.