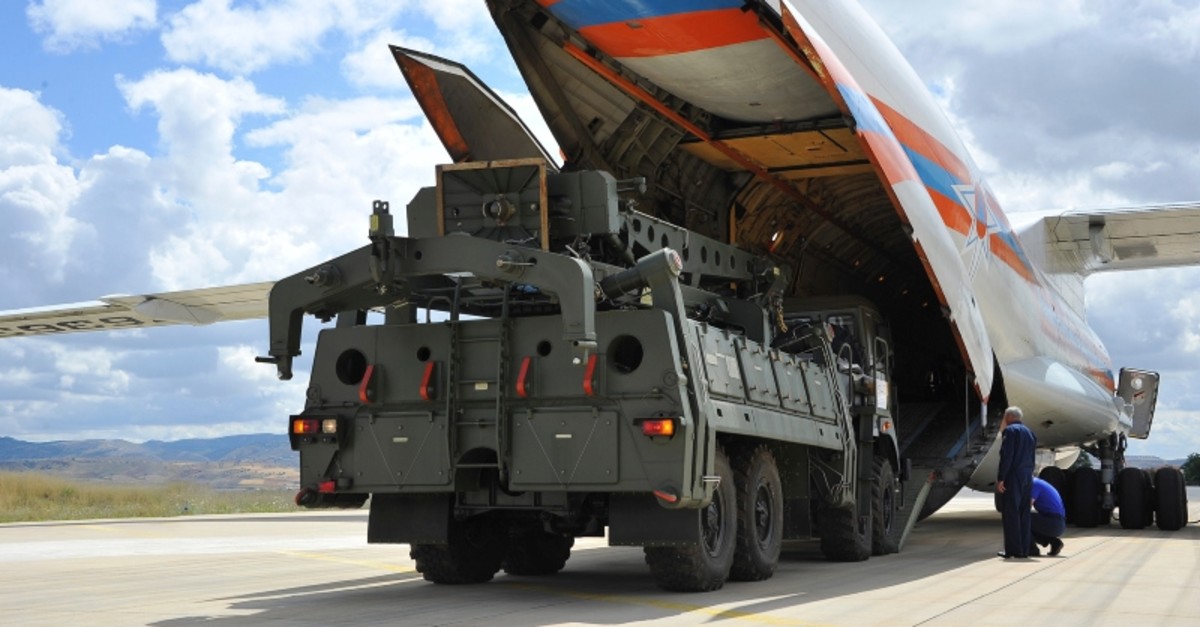 Military vehicles and equipment, parts of the S-400 air defense systems, are unloaded from a Russian transport aircraft, at Murted military airport in Ankara, Turkey, Friday, July 12, 2019. (Turkish Defense Ministry via AP, Pool)
by Daily Sabah with Agencies Jul 12, 2019 10:46 am

The first batch of S-400 parts started arriving Friday at Mürted Air Base, formerly called the Akıncı Air Base, near capital Ankara, the ministry said in a statement.

Meanwhile, Russia's federal service for military and technical cooperation confirmed the start of the deliveries of S-400 missile systems to Turkey, and said the delivery would be completed within the agreed time frame.

State broadcaster TRT showed footage of what it said was a third Russian Antonov An-124 cargo aircraft at Murted military airport in Ankara, saying that further deliveries were expected throughout the day and coming days.

It was not immediately clear when and where the system would be installed and activated for use.

TRT added that the system would be assembled at Murted airport by a joint Turkish-Russian technical team and installed in several locations across Turkey that have yet to be determined.

"The process is under way as planned," Foreign Minister Mevlüt Çavuşoğlu told reporters in Ankara. "We have coordinated the process, including permissions for planes and the personnel [that will accompany the equipment."

NATO was quick to comment on the development, and although it acknowledged such acquisitions were for countries to decide, it reiterated its concerns about incompatibility.

"It is up to allies to decide what military equipment they buy. However, we are concerned about the potential consequences of Turkey's decision to acquire the S-400 system," a NATO official told AFP, following warnings that the Russian system is incompatible with allied weapons.

"Interoperability of our armed forces is fundamental to NATO for the conduct of our operations and missions," the official, who spoke on condition of anonymity, added.

Ankara and Moscow inked a deal for the S-400s on April 11, 2017, when the parties signed a $2.5 billion agreement for two batteries of the systems — Russia's most advanced long-range anti-aircraft missile system in use since 2007.

The United States has repeatedly warned Turkey it will face economic sanctions if it goes ahead with the purchase. It has also said Turkey won't be allowed to participate in the program to produce the high-tech F-35 fighter jets.

Turkey has refused to bow to U.S. pressure, insisting that choosing which equipment to purchase is a matter of national sovereignty.