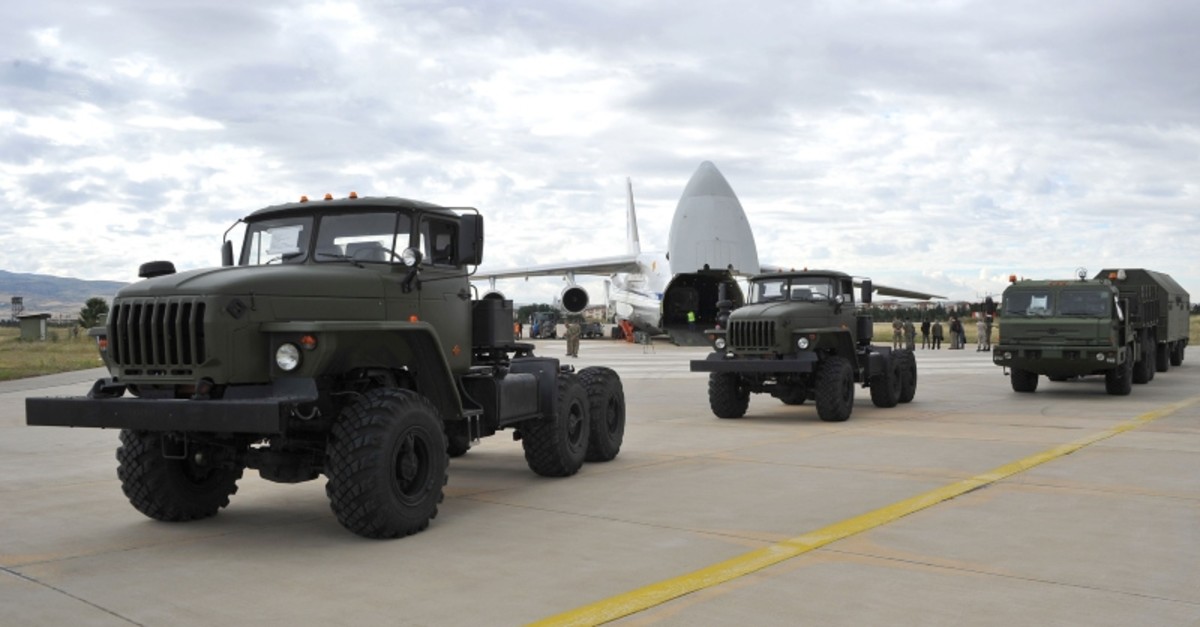 Dubbed the most advanced air defense system in the world, the S-400 delivery to Turkey continued Monday as the country demonstrated its determination to utilize the system against growing threats in the region

Delivery of the Russian-made S-400 surface-to-air missile (SAM) system to Turkey continued Monday as the ninth plane carrying hardware landed at Mürted Airbase, located on the outskirts of Ankara, which was also used as a base by putschists soldiers during the foiled coup attempt on July 15, 2016.

"Delivery of parts of the S-400 long-range air and missile defense systems is continuing. In this context, the eighth plane landed at Mürted Airbase," The National Defense Ministry said Monday on its official Twitter account. Later, the ministry also announced the arrival of the ninth plane. The deployment of the S-400 parts began on Friday and continued over the weekend.

No details regarding when and where the Russian surface-to-air missiles will be installed have been revealed.

In his address at a commemorative event for the third anniversary of the July 15 coup attempt, President Recep Tayyip Erdoğan stressed that the S-400 system will reinforce Turkey's air defenses. He also added that the installation process for the S-400 missiles will be complete by April 2020.

"With the purchase of S-400 missile defense system, Turkey is becoming one of the few countries with air defense systems. Now the aim is to have joint production with Russia," Erdoğan said.

"We are now considering launching joint design and development of the S-500 with Russia," he added.

A Turkish military team has been training in Russia since May, and the training was initially planned to last five months. State broadcaster TRT said Friday that the system would be assembled at Mürted by a joint Turkish-Russian technical team and installed in several locations across Turkey that have yet to be determined.

Turkey's decision to purchase the Russian-made defense system as a member of NATO was precipitated by mounting security concerns because of developments on the country's doorstep.

Murat Yeşiltaş, director of the Security Studies at the Foundation for Political, Economic and Social Research (SETA), highlighted that the S-400 system will reinforce Turkey's air defense and practically discharge significant risks ensuing from the war in Syria. The prevention of possible threats and strengthening the air defense capacity before any actual threat will be facilitated by the Russian SAM system, he remarked. "The missile system will also give Turkey a stronger hand in the geopolitical struggle we are currently witnessing in the Eastern Mediterranean," Yeşiltaş added.

The S-400 system enables Turkey to adopt a decisive military policy regarding the Eastern Mediterranean as a strong factor of deterrence. Yeşiltaş also emphasized that the system also provides advantages for Turkey in regional competition with Greece, particularly taking place in the Aegean and the Mediterranean.

The S-400 surface-to-air missile system is ideal for imposing a no-fly zone, Defense Policy Researcher Arda Mevlütoğlu said. "Considering the developments in the Eastern Mediterranean and Turkey's southern border, it is evident that the S-400 missiles will be a strong deterrence against any hostile threat targeting Turkey," Mevlütoğlu said.

With its long range, the S-400 will ensure protection against hostile fighter jets, aircraft and unmanned aerial vehicles (UAVs) on a broad region. "Particularly in the Eastern Mediterranean, the system will provide Turkey with a strong air defense capability," he indicated.

A look at the most developed air defense system

The S-400 is the fourth generation of the SAM, a system Russia started developing during the Cold War period. It has been dubbed the best air defense system in the world. The system was developed by the Central Design Bureau Almaz, now JSC NPO Almaz named after A. A. Raspletin. The design and development studies for the S-400 commenced in 1993; however, it took a long while to finalize the development and manufacturing following the budget cuts for the defense industry in the post-Soviet era. Therefore, it was not developed with new technology but released as an extension of the previous model S-300 but has significantly better performance capabilities in terms of effectiveness, coverage area, as well as in variety of targets. After tests were run in 1999, the system became operational in 2007.

The Russian-made SAM system is capable with manned or unmanned aerial vehicles, cruise and ballistic missiles. With a maximum range of 400 kilometers, its missiles can reach an altitude of 30 kilometers.

The long-range tracking radar monitors active aircraft and processes the data, sending it to the commanding vehicle, which later assesses the potential targets. After the detection of the target, the commanding vehicle decides to launch the missile. Data related to the launching process is submitted to the nearest available launcher, which then fires the surface-to-air missiles. The engagement radar helps the missile reach the target.

In 2007, Russia first deployed S-400s in Moscow for the protection of the capital. Later, as a result of Russian foreign policy and its increasing engagement in Syria after 2013 and 2015, S-400 systems were deployed in the Russian airbase located in Syria's Tartus to protect Syria's navy and air defense systems as Moscow continued to support the Bashar Assad regime – which has displaced millions of Syrians and killed hundreds of thousands during the eight-and-a-half year war.

Russia also has S-400 systems deployed in Crimea, which it annexed in 2014 despite widespread outrage from the global community.

As a member of NATO, Turkey's decision to purchase a Russian-made missile system has caused tension in relations with the U.S., which has repeatedly argued that the S-400 integration jeopardizes the security of the F-35 stealth fighter jets – of which Turkey is a customer and manufacturer.

Despite Turkey's repeated offers to set up a working group to investigate to what extent Turkey's S-400s will be incompatible with the new generation stealth fighters under the NATO roof, the U.S. has so far failed to provide any answer. Turkey's long-standing NATO ally has on numerous occasions threatened the country with sanctions under the Countering Americas Adversaries Through Sanctions Act (CAATSA), which mandates sanctions on any country that "engages in a significant transaction" with the Russian defense and intelligence sector.

U.S. Secretary of State Mike Pompeo told The Washington Post on Sunday that the U.S. is examining the delivery of Russia's S-400 missile defense system to Turkey, which he said may trigger sanctions.

Under the CAATSA, the U.S. administration may choose five options from a range of 12 sanctions on Turkey, which include cutting Turkey off from U.S. loans and international lending streams, shutting Ankara out of transactions on foreign exchanges, sanctions on Turkish banks, businesses and executives as well as property and investment bans.

However, during a meeting with President Recep Tayyip Erdoğan at the G20 summit last month, Trump pinned the blame for the row between the U.S. and Turkey over the S-400 deal and F-35 jets on former President Barack Obama, saying it was not Erdoğan's fault. Trump said it was Obama's administration that did not allow Ankara to buy Patriot missiles.

Washington further threatened to exclude Turkey from the multinational F-35 stealth fighter jet program, of which Turkey has been a partner since 1999 and made a payment of $1.4 billion so far. The Pentagon announced last month that it suspended the training of Turkish F-35 pilots in Luke Air Base in Arizona. In addition to the six Turkish officers, there are an additional 20 Turkish aircraft technicians at the base undergoing training as well, according to the U.S. military.

Why did Turkey purchase a Russian-made system?

The Ankara-Moscow S-400 deal was inked in December 2017, when the parties signed a $2.5 billion agreement for two batteries of the system – Russia's most advanced long-range anti-aircraft missile system in use since 2007. Turkey, as a NATO member with the second-largest army in the alliance, has not taken the decision to acquire a Russian-made surface-to-air-missile without a broad calculation of geopolitical risks. The country's doorstep is overrun with ballistic missile proliferation and rogue weapons of mass destruction (WMD) programs, as well as increasing terror threats by groups in northern Syria, including the People's Protection Units (YPG) and Daesh. The YPG is the Syrian affiliate of the PKK, a terrorist group designated as such by Turkey, the U.S. and the EU.

When Turkey wanted to the buy Patriot system from the U.S. in 2009 during Obama's term, U.S. Congress declined the offer for the sale of the Patriot PAC-3 batteries worth $7.8 billion at the time. Not selling the necessary missile systems to its NATO ally, Washington continued to provide extensive arms support to terror groups in Syria that have continuously attacked Turkey and claimed hundreds of lives.

Turkey's firm stance on the S-400 deal has led U.S. officials to make Turkey an offer for the Patriot defense system at a much lower cost. In January, the U.S. made an official offer to Turkey for a $3.5 billion sale of the Patriot missile and air defense systems during the visit of a U.S. delegation. On Friday, Defense Minister Hulusi Akar said Turkey is considering buying U.S.-made Patriot system.

Currently, China and India are the other countries that have struck deal with Russians to buy S-400s. Additionally, Saudi Arabia, Qatar, Algeria, Morocco, Egypt, Vietnam and Iraq have all discussed buying the S-400 missile system from Russia.

Three NATO members – Greece, Slovakia and Bulgaria – are in possession of S-300 defense systems. In 1998, at a time when Russia's integration into NATO was only whispered about and U.S.-Russia ties were on moderately good terms, Greek Cyprus purchased the Russian S-300 defense systems and intended to install them on the island. However, following Ankara's objections, Greece integrated them on the island of Crete. These systems are now used for NATO drills. In 2015, Israeli forces tested ways of defeating the S-300 missile system located in the Middle East. The Russian S-300 anti-aircraft system was also activated during joint drills between the Greek and Israeli air forces that year.