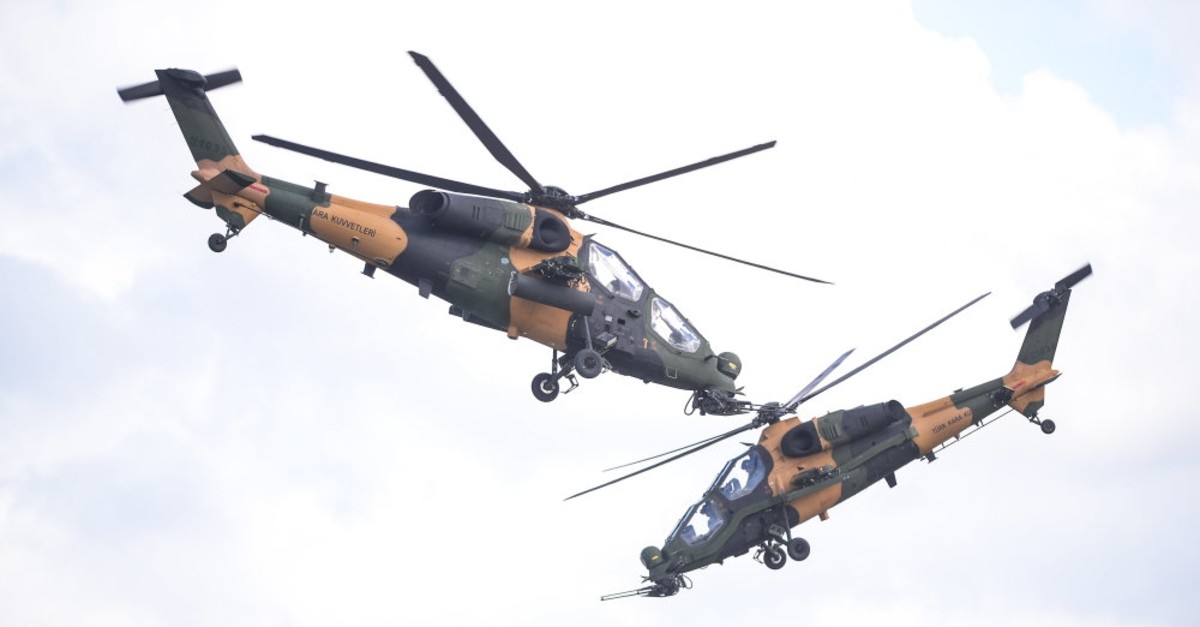 The T129 Tactical Reconnaissance and Attack Helicopter (ATAK) developed by the Turkish Aerospace Industry (TAI).
by Daily Sabah Jul 24, 2019 12:12 am

Recent performance and breakthroughs helped Turkish defense firms improve their ranks on the most prestigious defense industry list, which witnessed a major upheaval with the inclusion of Chinese defense firms, a first for the list since 2001

Thanks to the development they displayed and products and responsibilities they put forth recently, Turkish defense companies have reached significant economic achievements, a success that is being reflected on international comparison lists. Turkish firms have managed to secure their ranks in this year's Defense News Top 100, the most prestigious defense industry list, which witnessed a first for the Top 100 list since 2001; the inclusion of Chinese defense firms. A publication founded in 1986, the U.S.-based Defense News tracks the global defense industry and publishes an annual list of the world's largest 100 defense firms. The 2019 Top 100, which ranks companies based on the previous year's defense-related revenues, includes four Turkish companies, as was the case last year.

In 2018, Turkey's defense giants posted nearly $4 billion defense revenue, according to the list published on Monday.

Having first entered the list in 2006 at the 93rd spot and maintaining a successful performance to rank 55th last year, ASELSAN further improved its performance to finally rank 52nd on this year's list.

With the projects it has undertaken within the country as well as abroad, the Ankara-based firm managed to increase its revenue by 26 percent to hit approximately $1.8 billion in 2018, up from around $1.42 billion in 2017.

ASELSAN has achieved this success with research and development-based products and solutions it has developed in the fields of military and civil communication systems, radar and electronic warfare systems, electro-optical systems, avionics systems, defense and weapons systems, command control systems and marine systems. Having made its debut last year, STM has succeeded in carrying its success to this year. The company managed to increase its revenue by 53 percent to $564 million last year, up from $369 million in 2017, thus climbing 12 spots from 97th to rank 85th in this year's list.

Acting with a vision of becoming a leader institution in rocket and missile systems and having boosted the striking power of the Turkish Armed Forces (TSK), ROKETSAN also maintained its upward performance. Having ranked 98th on its debut, the company managed to climb to 96th, and finally found itself ranking 89th in this year's list of world's 100 largest defense companies.

TAI, which is known for its major projects, including the ANKA UAV, T129 Tactical Reconnaissance and Attack Helicopter (ATAK) and Hürküş training aircraft, and manufactures for leading aircraft manufacturers such as Boeing, Airbus, Lockheed Martin, Northrop Grumman, Bombardier and Leonardo, entered the list for the first time in 2011 at 83rd.

The company's revenue of $1.09 billion in 2017 declined by 4 percent last year to $1.050 billion. Having ranked 64th last year, the company dropped five spots to 69th place in this year's rankings.

For the third straight year, overall defense revenues for the Top 100 defense companies in the world have increased, as defense budgets around the globe continue to climb in what has been dubbed a new era of great power competition, according to Defense News.

Defense News said this growth is largely driven by a first for the Top 100 list since 2001 – The inclusion of Chinese defense firms. Even without eight new Chinese firms, that overall total is down to $393 billion, which would still represent an approximately $17 billion increase over the previous year's $375 billion total.

Geographically, 41 of the top 100 firms are based in the U.S., which accounted for about 52 percent of total defense revenue, slightly down from 2017. Thirty-two firms are located in Europe (including the U.K. and Turkey but excluding Russia), accounting for roughly 20 percent of defense revenue. Non-Chinese firms from the Asia-Pacific region claimed 11 companies; Israel housed three; Russia two; and Canada, Brazil and South Africa are each home to one.

Combined, the eight Chinese firms contributed just under $97 billion in defense revenue, behind only the United States and Europe. Because of their presence on the list, the top 10 spots have experienced their biggest shake-up in recent Top 100 history, said the magazine.

But China's presence was not enough to keep Lockheed Martin from remaining the top defense contractor in the world for a 20th straight year. Lockheed's $50.5 billion in defense revenue represents about 10 percent of the Top 100's total defense revenues, and dramatically outpaces the No. 2 company on the list, Boeing, which brought in $34 billion in defense revenue. Northrop Grumman ($25.3 billion) Raytheon ($25.2 billion) and Aviation Industry Corporation of Chine ($24.9 billion) round out the top five.

Combined, the top 10 firms brought in $246.5 billion in defense revenue in 2018, just over 50 percent of the overall total of the top 100, which Defense News says is evidence that while traditional defense firms are facing increased competition from new entrants into the market, the largest companies maintain a stranglehold on the defense industry.