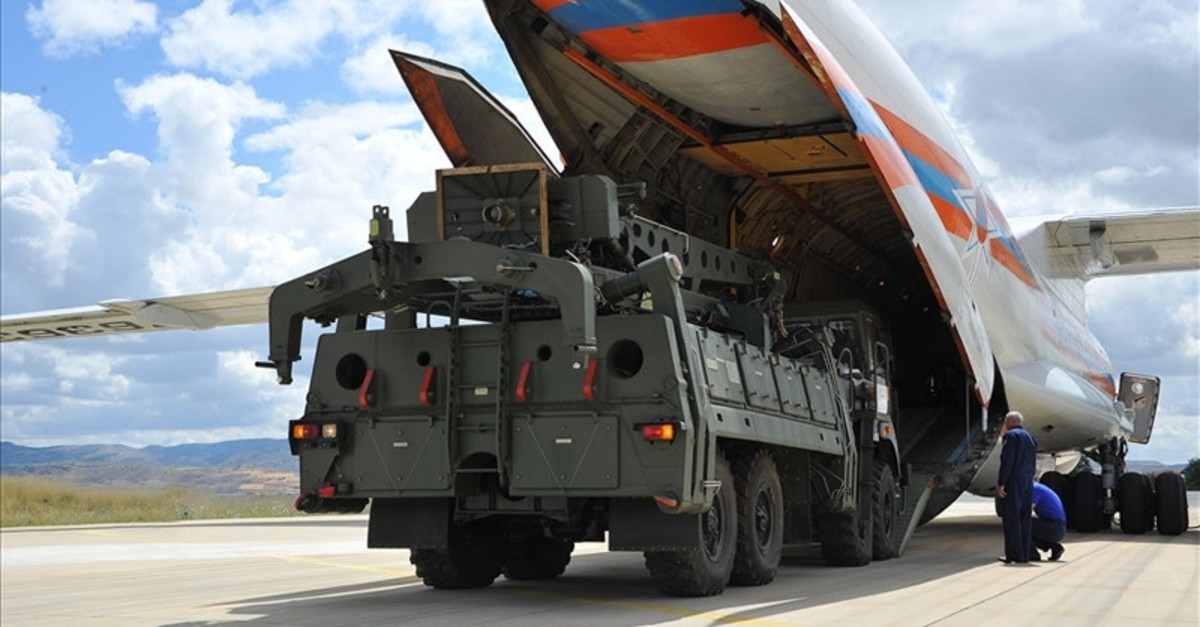 The first part of the delivery of the Russian S-400 missile defense system has been completed, Turkey's National Defense Ministry said Thursday. The ministry said the 30 planeloads of S-400 hardware and equipment were delivered to the capital Ankara from Russia as part of the first batch. According to sources inside the ministry, the second part of the shipment will also be delivered to Ankara.

Meanwhile, the sources also said negotiations were still ongoing with the U.S. over Raytheon's Patriot missile system as well. The delivery of S-400 components began in the second week of July.

After the purchase, U.S. officials advised Turkey to buy the U.S. Patriot missile system rather than the S-400s, arguing the Russian system would be incompatible with NATO systems and expose the F-35 to possible Russian subterfuge. Turkey said it would also consider the U.S. offer on Patriot missiles if the terms were agreeable but officials previously said what Washington had offered so far was far from reasonable.

The White House said last week that it was no longer possible for Turkey to be involved in the F-35 program after parts of the S-400 began arriving in Ankara. The U.S. also said it would impose sanctions on Turkey under the Countering America's Adversaries Through Sanctions Act (CAATSA), which aims to prevent countries from purchasing military equipment from Russia.

U.S. President Donald Trump is currently carrying out a policy of balancing Turkey and Congress, which is calling for sanctions on Ankara over the purchase of the Russian-made defense system.

Trump has also been vocal about why Turkey had to buy a Russian-made air defense system, although he did not refrain from sending mixed signals.

"The previous administration made some very big mistakes with regard to Turkey and it was too bad," Trump said in the Oval Office last week. "So, we're looking at it, we'll see what we do. We haven't announced that yet."

Trump previously said at a Cabinet meeting: "The [Barack] Obama administration would not sell them the Patriot missiles. They needed the Patriot missiles for defense. They would not sell them under any circumstance. And Turkey tried very hard to buy them and they wouldn't sell them, and this went on for a long period of time." In a meeting with President Recep Tayyip Erdoğan during the G20 summit in late June, the U.S. president has also then put the blame on his predecessor and underscored that the current situation with Turkey over the F-35 jets was not fair, as the country wanted to buy U.S. Patriot missiles before but Washington refused at the time.

However, the U.S. president still decided to remove Turkey from F-35 stealth fighter program, a statement released by the White House said last week. Therefore, Trump's decision on sanctions is a source of curiosity.

Trump signed the CAATSA bill into law in August 2017 with mounting pressure from Congress, which aimed to guarantee the Obama-era sanctions imposed on Russia following Moscow's meddling with U.S. elections in 2016, the annexation of Crimea and support for the separatist groups in eastern Ukraine.

The CAATSA law includes a wide variety of sanctions against Iran, Russia and North Korea, which are all seen as threats to the U.S. national security.

According to Article 231 of the law, people that work with Russian defense and intelligence are subject to sanctions. Therefore, the purchase of S-400 is categorized as a significant process applicable to sanctions.

How does the process work?

First of all, the U.S. National Security Council (NSC) is required to decide whether Turkey has engaged in a significant process with Russian defense sector with the purchase of S-400 missiles. If the NSC determines this, the U.S. Department of Treasury will examine the set of sanctions and advise the president on which sanctions should be levied. After the Treasury's advice, the president may prepare an executive order for the implementation of sanctions on Turkey. However, the lack of an article stipulating that when the president must sign the executive order gives him the liberty to impose the sanctions at a time he deems appropriate. Therefore, U.S. President Trump needs to persuade Congress, which is pushing for the full implementation of the CAATSA on Turkey.

Trump may exempt relevant persons and institutions from sanctions or may delay the sanctions for a period of up to 180 days or remove some of them. But whichever option he chooses, the U.S. president has to convince Congress and offer evidence substantiating his decision. In this case, Trump is likely to choose the lightest options from the set of 12 sanctions and put off the process for six months. According to the law, the president can extend the delay period for a second term of 180 days 15 days prior to the expiration date of the first round.

Meanwhile, citing two Republican resources, CNN reported on Wednesday that Trump made clear to the senators that "he does not want to sanction Turkey over its purchase of a Russian missile system."