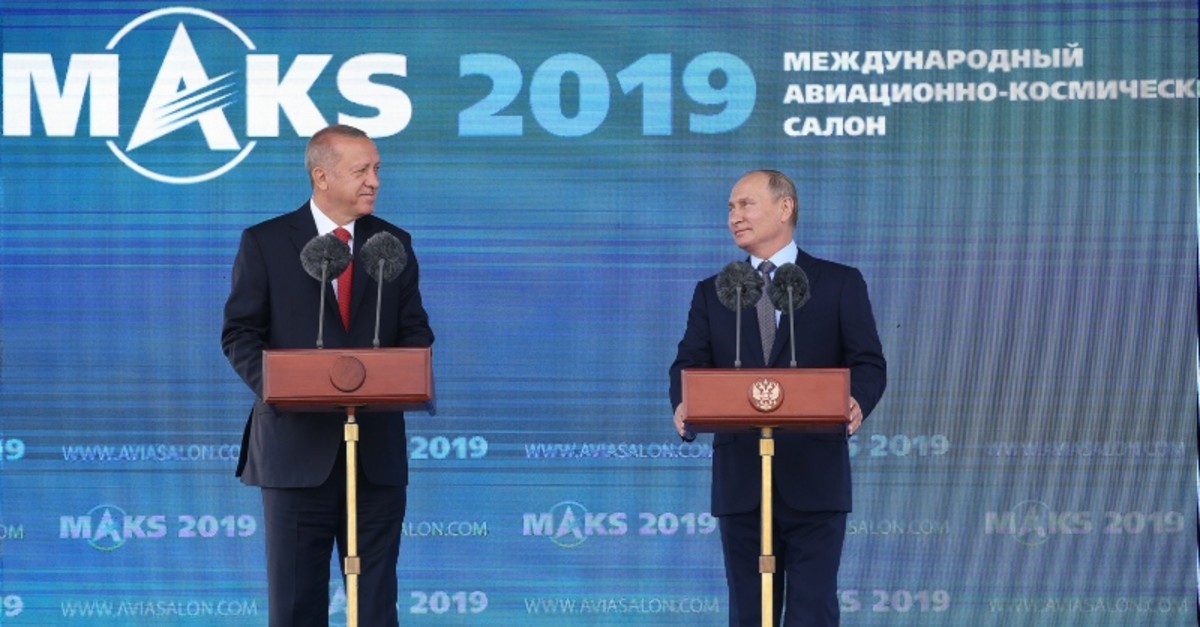 Leaders of Turkey and Russia expressed their intent to further develop their cooperation in the defense and aviation industry at the MAKS 2019 International Aviation and Space Salon, a biennial showcase of Russia's aerospace industry.

Speaking at the inauguration ceremony at Zhukovsky Airport near Moscow alongside his Russian counterpart Vladimir Putin, Erdoğan said he believed that "the synergy we have been cultivating with Russia in aviation and space technology will help deepen bilateral relations."

Erdoğan was in Moscow for a one-day trip, as part of which the leaders discussed bilateral relations and international issues. Ahead of the bilateral meeting, Erdoğan told reporters that he was "pleased" to visit the fair, and seeing fighter aircraft and passenger planes. He said the steps Russia has taken in space aviation proves its position in the science world.

Putin, for his part, said Russia and Turkey can unite efforts in the industry for aircraft construction.

"We have introduced you to a whole chain of both military and civilian production. This demonstrates not only Russia's capabilities in the aerospace sector, but also demonstrates the possibilities of cooperation.

"We know about your plans for the high-tech development of the economy. We could combine our efforts in areas that are most in demand," he said.

Later in the day, Erdoğan and Putin also appeared before cameras in the aftermath of their bilateral meeting, in which they also expressed their intent for closer cooperation in the defense field.

"Turkey and Russia can carry out joint work on Su-35 fighter jets and can also cooperate on Su-57 planes. We do not only have the potential to sell, but also to jointly produce," Putin said.

Erdoğan noted that Ankara's purchase of S-400 missile defense systems proceeded despite many rumors and threats, and the delivery for the second battery began today. "I'd like to maintain this solidarity with Russia in various defense industry fields, such as the joint production of airliners, fighter jets and radar scramblers," he said.

The U.S. has suspended Turkey from the multinational F-35 fighter jet program in reaction to Ankara purchasing Russia's S-400s. Washington has repeatedly said that the S-400 and the F-35 are incompatible.

"With the motto 'The future is in the skies,' Turkey has made a breakthrough in the aviation sector in the recent period," Erdoğan said during his address at the ceremony, referring to the famous quote of the Republic's founding leader Mustafa Kemal Atatürk. He said Turkey is becoming a country that "has a say" in the field of aviation and space technology, adding that the country's defense and aviation exports reached $2.5 billion in 2018.

Saying that ​MAKS-2019 is among leading exhibitions in the world in its field, Erdoğan pointed to the International Defense Industry Fair (IDEF'19), held for the 14th time this year, as a prominent event in Turkey.

Erdoğan also invited Putin and the Russian people to Teknofest, Turkey's largest aerospace and technology festival which will take place between Sept. 17-22 at Istanbul Airport.

The festival welcomed over 550,000 people last year, while Erdoğan said the figure is expected to reach 1 million this year. He also noted that the newly inaugurated airport will serve 200 million passengers when all phases are completed.

Putin, for his part, said Moscow "deeply appreciates" the global attention paid to the MAKS Airshow.

"I'm sure that all our partners, including, of course, our Turkish friends, he Turkish delegation, will be interested in the achievements of the aviation and space industries, the last generation products and this will open the new possibilities for the cooperation of the two countries," he added.

Putin said aircraft construction highly depends on international cooperation, the combined efforts of the constructors and scientists, and the effective use of industrial outputs.

The trade volume between the two countries was $25.7 billion in 2018. Turkey's exports to Russia amounted to some $3.4 billion, while its imports stood at $22.3 billion.

From January to May this year, Turkey's exports to Russia were $1.4 billion, while its imports from the country were $9 billion.

Putin, on the other hand, particularly stressed that an agreement was being worked on for the wider use of national currencies in the trade between Turkey and Russia.

He also said the bilateral investments between the two countries reached $20 billion.

The Russian leader stressed increased cooperation in the energy field, particularly pointing to two prominent strategic projects, Turkey's first nuclear power plant Akkuyu, currently under construction by the Russian firm Rosatom, and the natural gas pipeline project TurkStream, which will carry Russian gas to Turkey and Europe. Gas is expected to flow by the end of 2019.

On the other hand, Erdoğan also elaborated on the number of Russian tourists, which lead the way among foreign visitors in Turkey.

He said the country expects to welcome around 6 million Russians this year.

Over 18 million foreign visitors entered Turkey this January-June, official data showed and Russians accounted for nearly 15% or more than 2.7 million of the visitors, an increase of 13.9% year-on-year. Erdoğan also underscored that successful bilateral cultural and tourism events were being carried out.