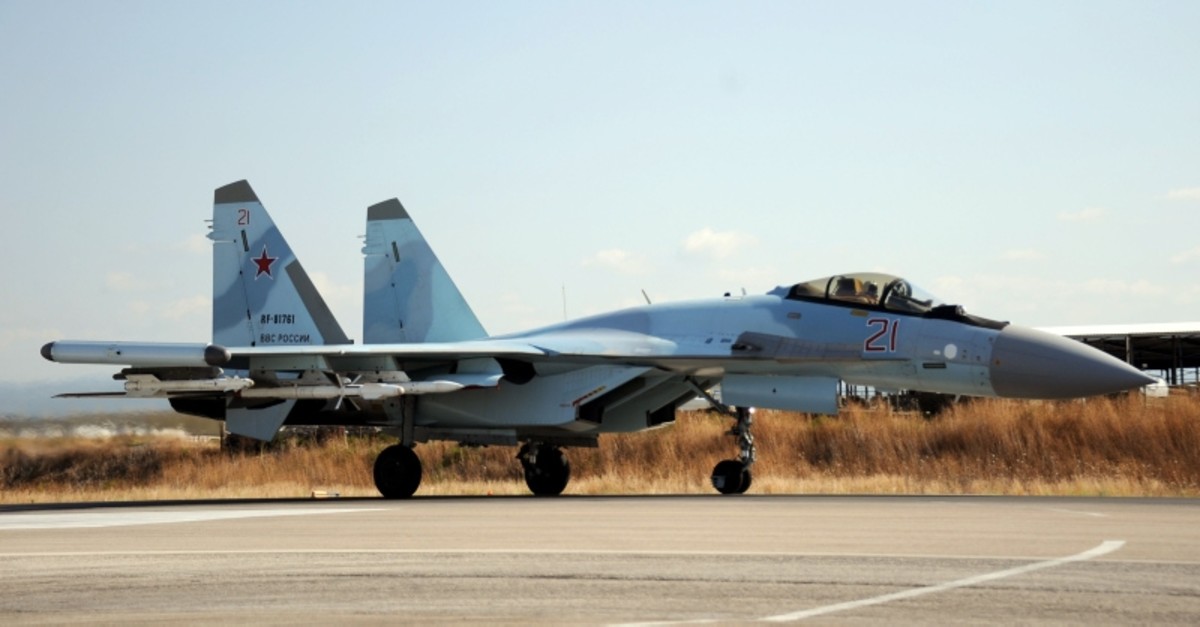 A Russian Sukhoi Su-35 fighter lands at the Russian military base of Hmeimim near Syria's Mediterranean coast on September 26, 2019. (AFP Photo)
by Daily Sabah with Agencies Sep 27, 2019 2:29 pm

Moscow and Ankara are having "progressive interaction" on fighter jets deliveries, the head of Federal Service of Military-Technical Cooperation Dmitry Shugaev said Friday.

The service organized a special presentation for the Turkish Air Forces in Istanbul "in dynamic and in static," Shugaev said in an interview with the state-run RIA news agency.

Asked about a possible delivery of the Russian fighter jets to Turkey, Shugaev said Su-35 model is in priority to sell as the "first in a line of Russian combat aviation," while Su-57 can be considered as the next stage.

"We have a progressive interaction in this area. It is too early to talk about any contracts and say that we have started something specific, but the issue is being studied, consultations are being held at the level of specialists and experts," he said.

Both sides recently discussed cooperation on Su-35 and Su-57 fighter jets, aviation engines and electronic warfare systems on the sidelines of the International Aviation and Space Salon MAKS-2019, when President Recep Tayyip Erdoğan paid a visit to Moscow to his counterpart Vladimir Putin.

Both sides recently discussed cooperation on the Su-35 and Su-57 fighter jets, aviation engines and electronic warfare systems on the sidelines of the event.

The Su-35 is Russia's top air superiority warplane, while the Su-57 is the country's fifth-generation most advanced multi-role fighter jet.

Turkey has been at odds with the United States over its deal with Russia for S-400 missile systems. The U.S. suspended Turkey, a fellow NATO member, from its F-35 stealth fighter program in reaction to Ankara's purchase. Washington argued the S-400 would be incompatible with NATO systems and expose the F-35 to possible Russian subterfuge. Turkey, however, emphasized the S-400 would not be integrated into NATO systems and would not pose a threat to the alliance and refused to step back from the deal.