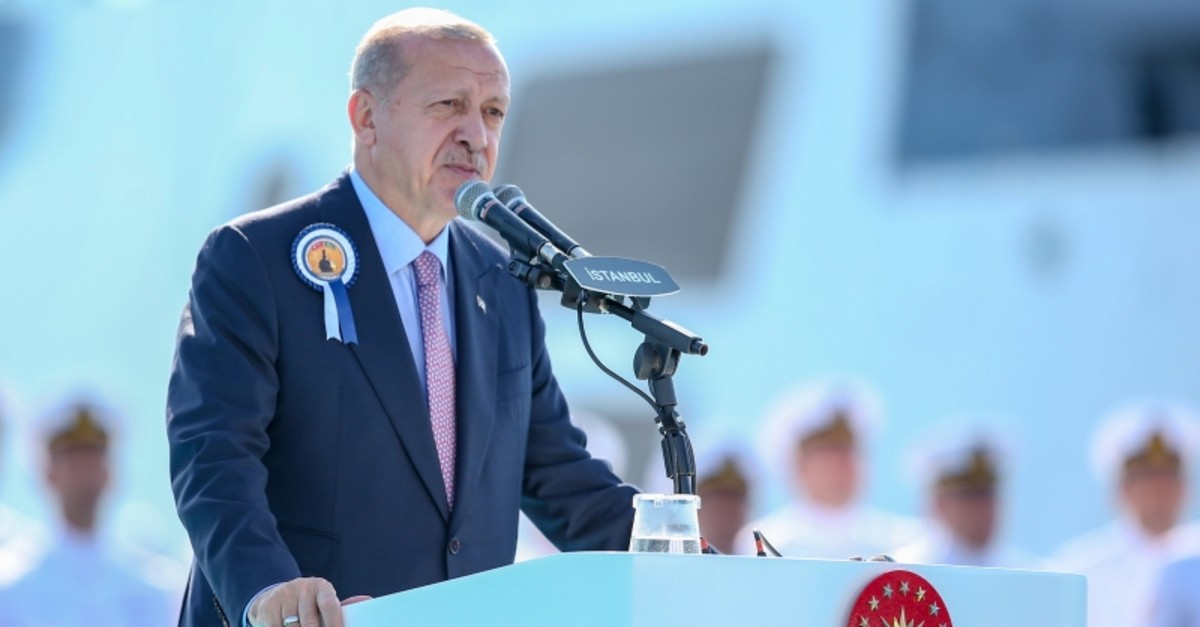 President Erdoğan said Turkey is resolved to reach new heights domestically in many areas, including production of ships, artillery, missiles, torpedoes and electronic systems, as it seeks to become self-sufficient in defense by 2023

Erdoğan's remarks came Sunday during the commissioning ceremony of the fourth domestically produced corvette TCG Kınalıada and the steel-cutting ceremony for the first MİLGEM-class (National Ship) ship to be sold to Pakistan.

In his speech, the president said Turkey has become one of the 10 nations able to develop, build and maintain a warship using exclusively domestic means. The MİLGEM project was initiated in 2000 to locally design and build a fleet of multipurpose corvettes and frigates that will replace older ships.

Turkey has built four corvettes so far within the framework of the program, namely the TCG Heybeliada, TCG Büyükada, TCG Burgazada and TCG Kınalıada, while the fifth vessel is under construction. The country's goal is to build eight corvettes within the scope of the program. The construction of all four ships of the ongoing Ada class – named after Istanbul's Princes' Islands – was undertaken by the Istanbul Navy Shipyard Command of the Turkish Armed Forces (TSK).

Erdoğan said TCG Heybeliada was launched in 2011, TCG Büyükada in 2013, and TCG Burgazada in 2016, adding that with years of experience in the MİLGEM project, the locality rate was increased up to 70%.More than 50 local companies served as subcontractors in TCG Kınalıada, whose platform systems and design services were provided by Turkish defense firm STM, weapon and sensor systems by ASELSAN, and combat management system by HAVELSAN.

"Thus, the locality rate of the ship was further increased. The construction of the fifth vessel of the MİLGEM project and the first of the Class I frigates, which are the continuation of the Ada class corvettes, started with the signing of the contract between our Defense Industries Presidency and STM," Erdoğan noted.

While the design, construction and integration activities of TCG Kınalıada were carried out at Istanbul Naval Shipyard Command, numerous simultaneous projects within the scope of design, research-development, supply, and service procurement required for these activities were undertaken by the Defense Industries Presidency (SSB) in accordance with the domestic and national facilities.

Meanwhile, Advent, a Network Supported Combat Management System developed jointly by HAVELSAN and Turkish Naval Research Center Command (TNRCC), is being used for the first time on this vessel.

The 99-meter-long and 14.4-meter-wide TCG Kınalıada is a single hull displacement boat developed to meet the speed, maritime and stability demands of the Turkish Navy.

While TCG Kınalıada can reach a maximum speed of 29-plus nautical miles, it has the necessary platform, hangar and extensive support equipment for a 10-ton helicopter and can perform helicopter flight operations up to sea state four.

Equipped with advanced technology sensors, electronic warfare, navigation, and communication systems, most of which have been developed with domestic facilities, TCG Kınalıada has also been designed with defense, deception, mixing and elimination systems for asymmetrical, surface, air and underwater threats.

Erdoğan also stated that the corvettes in service successfully performed their duties by taking part in numerous national and international exercises, highlighting that the success of these corvettes, which attracted the attention of many states, ranked among the top ships of similar class in the world.

The president further stressed that Turkey is resolved to reach heights domestically in all areas including ships, artillery, missiles, torpedoes and electronic systems.

"We will soon build our own warplanes just as we have developed our own unmanned aerial vehicles, ATAK helicopters and satellites. If they woke the sleeping giant, they will suffer the consequences," Erdoğan said, alluding to F-35 fighter jet dispute between Turkey and the U.S.

The president said Turkey aimed to become self-sufficient in terms of defense needs by 2023.

He noted that 700 various defense projects were being carried out in Turkey, adding that in terms of project volume, a size of $60 billion has been reached in the industry.

The exports of the defense and aerospace industry totaled nearly $2.5 billion as of the end of last year, the president added.

Yesterday's event also marked the start of construction on a ship to be sold to Pakistan's navy.

In July last year, Ankara won a multibillion-dollar tender to supply four corvettes to the Pakistan Navy – a deal dubbed the highest export deal in the history of Turkey's defense industry by then-Defense Minister Nurettin Canikli.

According to the agreement, two ships will be built in Istanbul, while two others will be built in Karachi. The first pair of the corvettes are expected to join the inventory of Pakistan's naval forces in 2023, while the remaining two will be handed over in 2024.

Erdoğan expressed hopes that Pakistan, a nation friendly to Turkey, will also benefit from the ship.