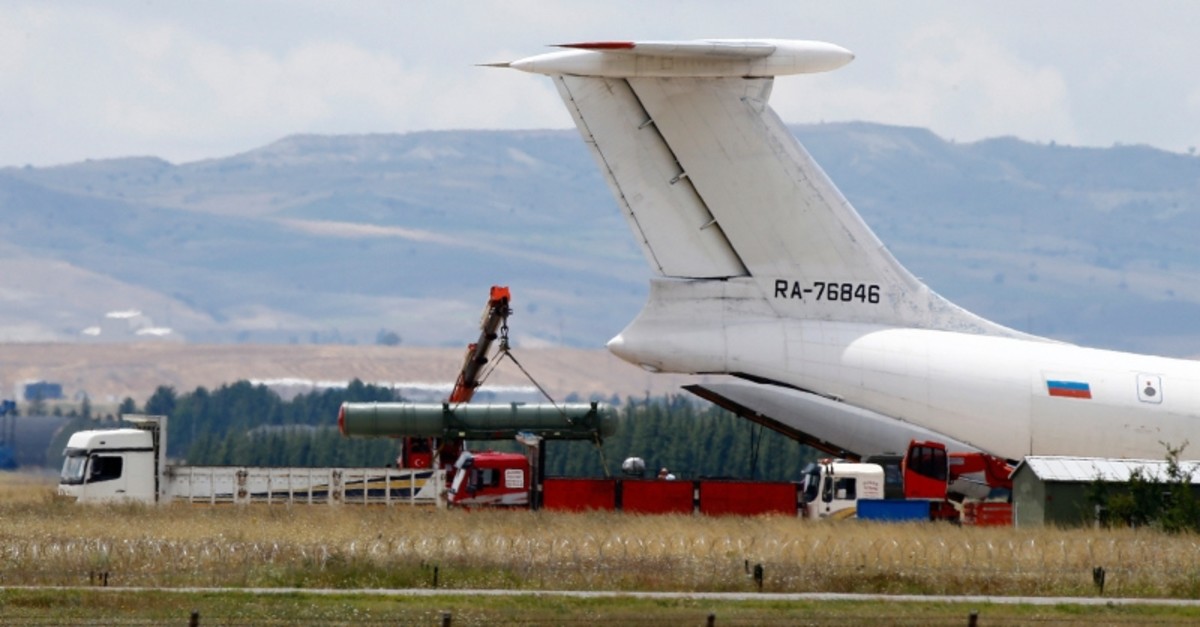 | AA Photo
by Daily Sabah with Reuters Nov 26, 2019 9:56 am
Russia hopes to seal a deal to supply Turkey with more S-400 missile systems in the first half of next year, the head of Russian state arms exporter Rosoboronexport, Alexander Mikheev, said in an interview with RIA news agency published yesterday.
Mikheev said Moscow and Ankara were actively discussing to supply Turkey with an option that was part of the original contract outlining the delivery of more S-400 systems, with talks now mostly focused on financial details.
Sensing that the country's protracted efforts to purchase an air defense missile system from its U.S. ally was looking to come to naught, Turkey signed a $2.5 billion deal with Russia in 2017 to acquire the S-400 anti-missile shield. Russia delivered two batteries of the S-400 system to Turkey between July and September this year.
"We hope that in the first half of 2020 we will sign the contract documents," RIA cited Mikheev as saying. "But I want to stress that military technical cooperation with Turkey is not limited to the supply of the S-400s. We have big plans ahead."
The Russian missile system purchase has been a sticking point between Turkey and the U.S. for some time, as Washington has argued that the S-400 system would be incompatible with NATO systems and would expose its advanced fifth-generation F-35 jet to possible Russian subterfuge.
Turkey, however, emphasized that the S-400 would not be integrated into NATO systems and would pose no threat to the alliance, rejecting calls to back out of the deal. Ankara also stressed it was the U.S.' refusal to sell it Patriots that led it to need to seek out other sellers, adding that Russia offered it a better deal, including technology transfers.
Turkey even proposed the setting up of a commission to clarify any technical issues. But the U.S. has, so far, not responded to this proposal.
The acquisition of the Russian system prompted the Trump administration to remove Turkey from the F-35 fifth-generation joint strike fighter program, in which Ankara was formerly a major buyer and manufacturer, in July. Tensions deepened after that month, in which Turkey received its first shipment of the Russian equipment. Washington warned it would impose sanctions beyond removing Turkey from the F-35 program.
EFFORTS TO RESOLVE S-400 ROW TO CONTINUE UNTIL APRIL
Earlier this month, the thorny issues surrounding the S-400 system and sanction threats were raised at talks in Washington, where President Recep Tayyip Erdoğan met with his American counterpart Donald Trump. At a meeting at the White House, Erdoğan and Trump agreed to ask their respective ministers and national security advisers to “immediately work on resolving the S-400 issue.”
Following the meeting, Erdoğan said his country would be open to buying U.S. Patriots too, but reiterated once again that Turkey would not give up on the S-400s. He later said that he told his U.S. counterpart that Ankara would seek alternatives if the U.S. did not adopt a more compromising stance regarding the F-35s.
Speaking to reporters on board the presidential plane en route to Ankara after a one-day trip to Qatar, where he attended the fifth meeting of the Turkey-Qatar High Strategic Committee on Monday, the president said Turkish and U.S. officials would make efforts to resolve the dispute between the NATO allies over the defense system until April.
“There is a process that is ongoing until April. Our defense ministers and foreign ministers will take charge of these efforts. We have to see where we get,” Erdoğan was cited as saying when asked how the row would be resolved.
“This is an issue that is related to NATO. There is nothing about using or not using them,” Erdoğan said. “There are steps that need to be taken within NATO rules. Our colleagues will do the work.”
Turkish media said on Monday F-16 warplanes would fly over the country’s capital Ankara to test the S-400 system, but officials have yet to confirm that such tests took place.
TURKEY GAVE NO PROMISE ABOUT NOT INSTALLING S-400
Turkish officials have previously said that the system would be fully deployed by April 2020. Turkey has given no guarantees that it would neither install nor use the S-400s, Foreign Minister Mevlüt Çavuşoğlu told reporters in the capital Ankara yesterday. Rosoboronexport’s Mikheev said the new S-400 deal option, if signed, would cover a new regiment of the defense systems and that some of the components would be produced in Turkey.
He said it was premature to talk about which components would be made in Turkey and in what quantities. Mikheev was cited as saying that efforts by the United States to stop other countries buying Russian military hardware had not been as effective as Washington hoped.
“You can see how confident India, China, Turkey and other countries are on the international stage,” he said. “Many are openly outraged by U.S. sanctions policy, which is trying to prevent them from developing their own armed forces and technical military cooperation with Russia,” he said.