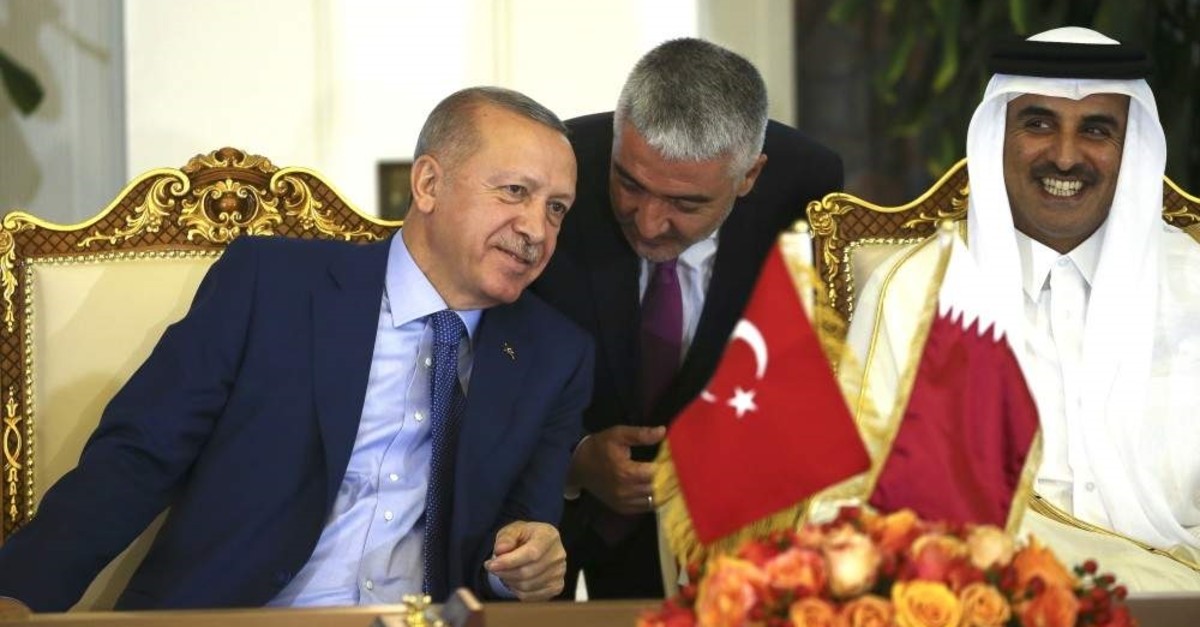 Enhanced partnership between Ankara and Doha offers a safeguard against the rising uncertainties and tensions in the Gulf and the broader geography, preventing further escalation

June 2017 marked a significant point in the history of the Gulf and the broader region. When Gulf countries, led by Saudi Arabia, the United Arab Emirates (UAE) and Bahrain, severed ties with Doha, it led to transformative geopolitical and economic changes in the region. In the face of attempts to isolate Qatar by cutting the supply of certain goods for which it relies on imports and making threats of military action, Turkey took immediate action by sending troops to the country, providing political support and sending necessary products.

The Gulf crisis, to a certain extent, redefined the nature of Turkish-Qatari ties, ensuring closer dialogue between the two states. Therefore, Turkish involvement in the Gulf crisis has been seen as a guarantee to safeguard Qatar's sovereignty while strengthening Ankara's foothold in a region swayed by rising tensions and rivalries.

Joined by Egypt, Yemen and the Tobruk-based Libyan government as well as a couple of other countries in the following days of the crisis, the triumvirate of the Gulf Cooperation Council (GCC) could not foresee the implications of Turkey's immediate action in the face of a full-scale embargo on Qatar.

With a quick response to the crisis – though it was not the first time Doha was drawn into by its neighbors in a diplomatic row – Ankara increased the number of troops deployed in Qatar as a measure of deterrence against any military action. According to subsequent media reports, the are currently 5,000 Turkish troops at the Qatar-Turkey Combined Joint Force Command (QTCJFC). Yet before the crisis, only 300 to 500 Turkish troops were based there.

Turkey's military involvement in Doha dates back to Dec. 19, 2014, when the authorities inked a deal for the deployment of the Turkish Armed Forces (TSK) in Qatar. The first group of Turkish troops arrived in the capital city of Doha on Oct. 4, 2015, and the Turkish flag was hoisted at the military base four days later.

The inauguration of the second Turkish base in Doha on Monday further fortified the bilateral military and defense cooperation between the two nations. During the inauguration ceremony, President Recep Tayyip Erdoğan hailed the strong ties between Turkey and Qatar and remarked that the cooperation would serve regional peace and security.

"The QTCJFC serves stability and peace of not only Qatar but also the Gulf region," Erdoğan said after meeting troops at the newly completed base. The command center was named after Khalid bin Walid, one of the Islamic world's greatest generals who commanded armies of the Prophet Muhammad in the 7th century.

The president dubbed the military base as "a symbol of brotherhood, friendship, solidarity and sincerity."

"We have never left our friends alone in any period of history against threats and risks – and we never will," said Erdoğan.

"The inauguration of the new military base in Qatar reflects Turkey's increasing involvement in the security of the Gulf emirate and the Gulf region in general. The QTCJFC is expected to further promote the ability of both states to bring stability and peace in the region," Ali Bakeer, a political analyst and expert in the Middle East region told Daily Sabah.

Bakeer particularly drew attention to the fact that the 2017 Gulf crisis has demonstrated that Turkey has a unique status in the security calculations of the Gulf emirate due to the crucial role it has played in preventing a military escalation of the crisis.

Cognizant of the potential consequences of any further escalation in the region, Ankara and Doha resolutely maintained their commitment to the enhancing military and defense ties despite an ultimatum issued by the other GCC countries. In one of the 13-point ultimatum given to Doha, Saudi Arabia and UAE demanded the termination of Qatar's military cooperation with Turkey and the removal of Turkish troops in the country – a demand that has never been delivered.

The political turmoil and uncertainty in the region and growing threats by state and non-state actors, he stressed, require both nations to further develop the existing military and defense relations. "There is a promising future in terms of defense relations, military cooperation, security coordination, military procurement and production," Bakeer added.

Mohammed al-Mesfer, a professor of political science at Qatar University, told Daily Sabah that military cooperation between the two states particularly expanded after the 2017 Gulf crisis. "The Turkish base in Qatar, like the American base, is not there for aggression, the base is situated in Qatar only for defense purposes, to maintain stability in the region and preserve the peace among Doha and its GCC neighbors," al-Mesfer said.

The defense sector has been a key area of partnership in the growing relationship between Doha and Ankara with Turkish defense companies signing large-scale agreements to deliver military equipment to Qatar.

One of the recent major contracts was secured by Turkish unmanned aircraft producer Baykar Makina. The Turkish company signed in March a deal to deliver six Bayraktar TB2 armed UAV Platforms, three ground control station systems and equipment, as well as a UAV training simulator that will be delivered within a year. The agreement also included training of Qatar armed forces personnel and providing logistical and technical support.

Armored vehicle manufacturer BMC, in which the Qatari Armed Forces have a stake, was contracted for the mass production of the main battle tank in November 2018. Altay was designed to replace the Turkish military's German-made Leopard tanks and the aging American-made M60 tanks. Last year BMC took over the production rights of a tank maintenance factory in Arifiye district of the industrial province of Sakarya with an investment of $50 million. "A $50 million investment will renew and upgrade old machinery and equipment at the factory," Erdoğan told reporters on Monday on the presidential plane.

The 2018 International Maritime Defense Exhibition (DIMDEX) in Doha saw the signing of multiple large-scale contracts, worth a total of $800 million, between the two countries. The agreements included the purchase of 85 wheeled armored vehicles from Turkish domestic armored vehicle manufacturer BMC, including 50 Kirpi 4x4 MRAP, and 35 Amazon 4x4 multi-purpose armored vehicles.

At the Doha exhibition, Qatari officials also bought two training warships for its navy from Turkey's Anadolu Shipyard and two separate agreements with Turkey's Ares and Yonca-Onuk shipyards for another 17 military vessels, all of which were to be outfitted with weapons built by Turkish defense manufacturer Aselsan.

As Turkey has shown political and military support for Qatar, Doha also responded in the same way after Ankara launched a third military operation in northern Syria on Oct. 9.

Qatar's Foreign Minister Sheikh Mohammed bin Abdulrahman Al Thani voiced his country's support for Operation Peace Spring during his address at a Global Security Forum meeting in Doha. "Turkey from the very beginning said don't support these groups," Al-Thani said, referring to the PKK-affiliated People's Protection Units (YPG). "Nobody listened. They have been trying to solve this issue now for more than a year with the U.S., to create a safe zone to get the threat away from their border." The Qatari foreign minister recalled that the People's Protection Units (YPG) are a branch of the PKK, which is recognized as a terrorist organization by the U.S., EU and Turkey.

Other foreign bases in Qatar

The U.S. Combined Air Operations Center (CAOC) at Qatar's Al-Udeid Air Base provides as a command and control center of airpower throughout Iraq, Syria, Afghanistan and 17 other nations.

The base, which boasts one of the longest runways in the Persian Gulf at 12,500 feet, is a strategically important facility that can accommodate up to 120 aircraft. According to several media reports, the base is manned by 10,000 troops from U.S. Air Force, Army, Navy and Marines in addition to coalition partner countries including the Royal Air Force. Al-Udeid was used as the ground to fly B-52 airstrikes against Daesh targets in Iraq and Syria in 2016.

Another NATO member France has also recently made moves to establish military and defense cooperation with Doha. During her Gulf tour on Nov. 22-25, French Minister of the Armies Florence Parly and Qatar's Deputy Prime Minister and Minister of State for Defense Khalid Bin Mohammed Al-Attiyah signed a military agreement that will enable French troops to be stationed in the country.

During her address, Parly stressed that France is getting militarily involved in the country due to the decreasing role of the U.S. in the region. "We have seen a deliberate, gradual U.S. disengagement," she remarked. Doha and Paris had also signed several military and armament deals worth nearly 12 billion euros ($13.22 billion) in December 2017.