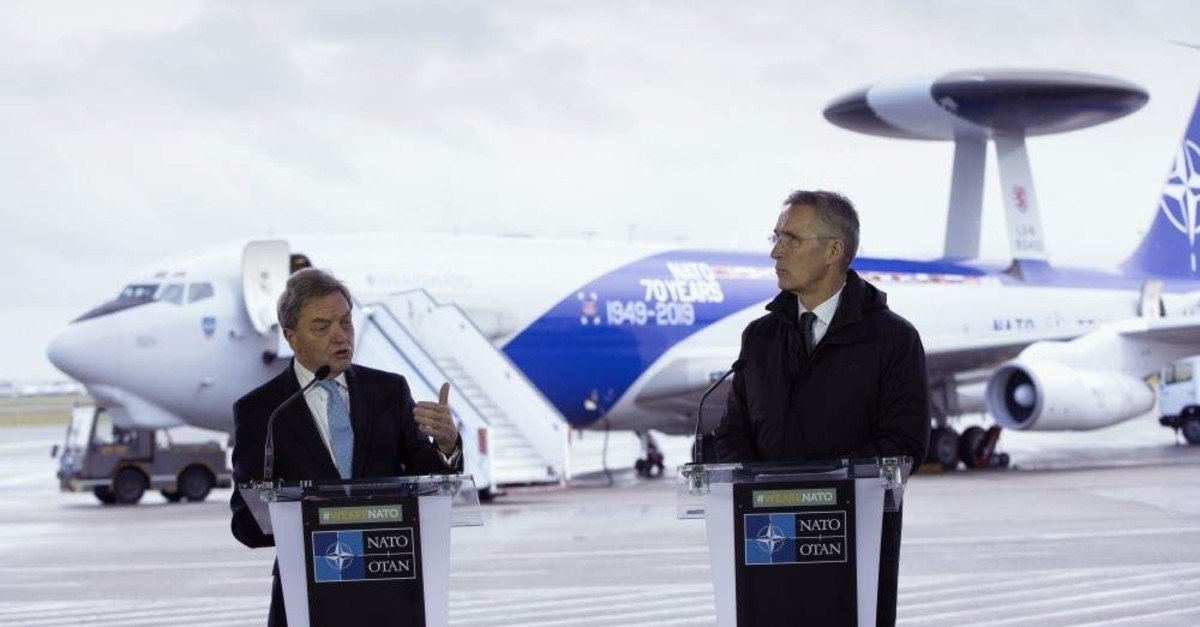 NATO Secretary General, Jens Stoltenberg, right, and the President of Boeing International, Sir Michael Arthur, speak during a media conference at Melsbroek military airport in Melsbroek, Belgium, Nov. 27, 2019. (AP Photo)
by Nov 27, 2019 8:17 pm
NATO on Wednesday awarded Boeing a $1 billion contract to upgrade its fleet of AWACS reconnaissance planes, a deal officials said showed the strength of transatlantic cooperation days before an alliance summit in London.
First flown in 1982 and repeatedly modernized, the Boeing-made planes, which can detect hostile aircraft, missiles, ships and other weaponry far beyond NATO borders, will be overhauled with more powerful computer processors, servers and equipment.
The 14 planes, based at an air base in Germany, can already exchange information via digital data links, with ground-based, sea-based and airborne commanders, but need a greater capacity to transmit data as technology develops. The upgrade will keep one of the few military assets owned and operated by the Western alliance in service until 2035.
AWACS have been flown in support of the international coalition against Daesh, gazing deep into Syria from Turkey, as well as along NATO's eastern flank following Russia's 2014 annexation of Crimea from Ukraine.
"The modernization will ensure that NATO remains at the leading edge of technology," NATO Secretary-General Jens Stoltenberg told a news conference alongside Boeing President Michael Arthur, standing in front of one of the planes.
"It will provide AWACS with sophisticated new communications and networking capabilities, so these aircraft can continue their vital missions," he said.
One NATO official described AWACS, which have crews drawn from 18 different allies, as a symbol of NATO unity, at a time when U.S. President Donald Trump has questioned its value and French President Emmanuel Macron last month said NATO was dying. The upgrade will be funded by 16 NATO allies, including the United States, Germany, Turkey, Italy and Spain, and some work will be subcontracted to European suppliers including Leonardo and Airbus.
The modernization comes as NATO takes delivery of the first of five Global Hawk drones, which will be based in Italy. After years of delays, the high-altitude drones made by Northrop Grumman give the alliance its own spy drones for the first time and will work with the AWACS to protect ground troops, as well as other tasks. The drones will be able to fly for up to 30 hours at a time in all weather, providing near real-time surveillance data.