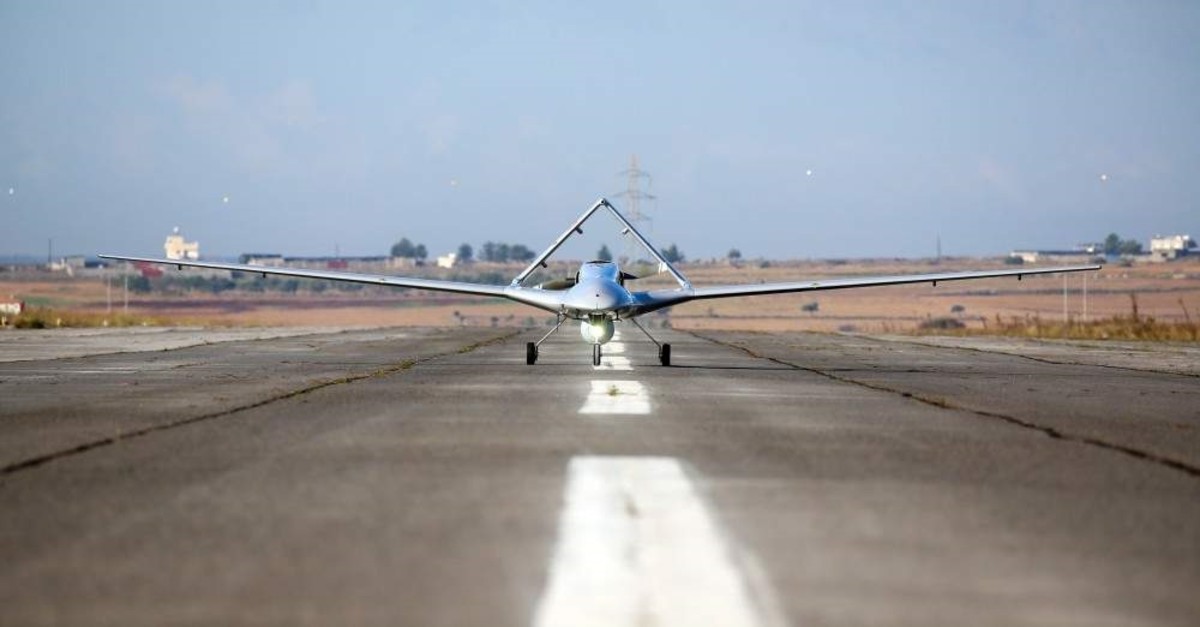 The deployment of drones at the Northern Cyprus' Geçitkale Airport has been a significant diplomatic and military message by Turkey, emphasizing its perseverance to protect and pursue the interests of the Turkish Cypriots and Turkish people in the Eastern Mediterranean

With the deployment of the first Turkish unmanned aerial vehicle (UAV) in the Geçitkale Airport in the Turkish Republic of Northern Cyprus (TRNC) Sunday, Turkey and the Turkish Cypriots have taken a significant step toward instituting an airbase in the region, hence bolstering the national security in the Eastern Mediterranean.

Taking off in the Aegean province of Muğla’s Dalaman airbase at 5 am, the domestically developed and produced Bayraktar TB2 drone landed in Northern Cyprus after a five-hour flight. In a short period of time, the Geçitkale Aiport is planning the operations of five Bayraktar TB2 drones and more armed UAVs, expected to arrive soon.

Bayraktar TB2 drones had been accompanying Turkish drilling and seismic vessels in the Eastern Mediterranean to ensure their full protection against any harassment by the Greek Cypriots. The drones that protect Turkish vessels in their exploration activities in the region used to take off from Dalaman and reach the area of operation following an eight-hour flight. Their deployment in Northern Cyprus, however, provided more convenience for the protection of the vessels — saving time, cost, fuel and channeling the drone capacity to perform their surveillance duty.

The move comes at a time when Ankara is at odds with Greece, the Greek Cypriot administration, Israel and Egypt over the demarcation of exclusive economic zones in the Eastern Mediterranean and hydrocarbon exploration.

Turkey and Libya signed two separate deals. One of the deals was critically important, as it enabled Turkey to secure both its own rights, as well as the rights of the TRNC in the Mediterranean while preventing any fait accompli actions from other regional states.

In a statement to TRT Haber Saturday, TRNC Prime Minister Ersin Tatar stressed that the security circumstances require the TRNC Cabinet to decide on the deployment of Turkish armed and unarmed drones in the Geçitkale Airport. “The decision came after due consideration of the interests and rights of Turkey and Turkish Cypriots,” said Tatar. He continued, “The developments over the last decade, including the discovery of the hydrocarbon resources in the region, have compelled us to take steps to protect our interests and sovereign rights.”

In a written statement Sunday, TRNC Economy and Energy Minister Hasan Taçoy also stressed the Turkish people’s resolution and perseverance to protect their rights in the region within the framework of international law. Taçoy also remarked that the Turkish drones will contribute to boosting peace and security, deterring any act by other parties that could lead to further destabilization in the region.
A CHANGE IN POLICY

Turkey’s deployment of Bayraktar TB2 drones in Northern Cyrpus came after a long time as the country has not had any military aircraft in Geçitkale since the early 2000s.

Until 2000, Turkey’s F-16 fighter jets were located in the Geçitkale Airport, but as an act of goodwill, Ankara withdrew its military aircraft from the airport – which only served as an observation base for performance aircrafts such as Solo Türk and Turkish Stars. Although Turkey has taken the first military step in Geçitkale after a long time, its drones currently are not armed since the Greek Cypriots’ drones are carrying out surveillance operations with no ammunition.

Furthermore, the decision to send drones to Geçitkale also sends a diplomatic message to all of the parties involved in the region. By not sending an armed aircraft at the initial phase, Turkey is showing goodwill by not escalating tensions, but Ankara’s move – supported by the TRNC government – also indicates a change in the military requirements due to recent circumstances. It also signals that Turkey is moving ahead with its plan to militarily secure the rights of the Turkish people and Turkish Cypriots in the Eastern Mediterranean by boosting air and naval capacity; the country was previously reported to be building a naval port.

Turkish navy ships reportedly intercepted an Israeli research ship in the Eastern Mediterranean and drove it away two weeks ago. The ship Bat Galim, of the Israel Oceanographic and Limnological Research institution, was approached by Turkish vessels while conducting research in coordination with Cypriot officials and the Cypriot government.

In a bold disregard of the rights of the Turkish Cypriot community, the Greek Cypriots unilaterally declared a total of 13 so-called parcels in the Eastern Mediterranean as its Exclusive Economic Zone (EEZ) and allowed international oil and drilling companies to operate in these areas.

In 1974, following a coup aiming at Cyprus’ annexation by Greece, Ankara had to intervene as a guarantor power. In 1983, the TRNC was founded on the northern third of the island and is only recognized by Turkey, facing a longstanding embargo in commerce, transportation and culture. The decades since have seen several attempts to resolve the Cyprus dispute, all ending in failure. The latest one, held with the participation of the guarantor countries – Turkey, Greece and the U.K. – ended in 2017 in Switzerland.

The TRNC’s transport minister, Tolga Atakan, and Energy Minister Taçoy confirmed that Turkish drones were partly sent in response to the acquisition of Israeli drones by the Greek Cypriot administration in October to monitor its exclusive economic zone.

The Greek Cypriot administration has purchased eight drones from the Israeli company Aeronautics to monitor the land and sea and has been delivered four of them. Israeli pilots are currently training their Greek Cypriot counterparts for the drones.

The Greek Cypriots also bought 24 new artillery systems from Serbia in the summer, which appeared before the public for the first time in a military parade last week.

The Israeli army’s first special forces exercise on the island of Cyprus was held in June 2017, with approximately 500 soldiers, with the last one carried out during the first week of December.

Moreover, the Royal Air Force of the U.K. also has a base called RAF Akrotiri in the southern part of the Cyprus island and has its stealth fighters F-35 located at the base.