New aerial, naval, land systems to be delivered to Turkish defense forces in 2020 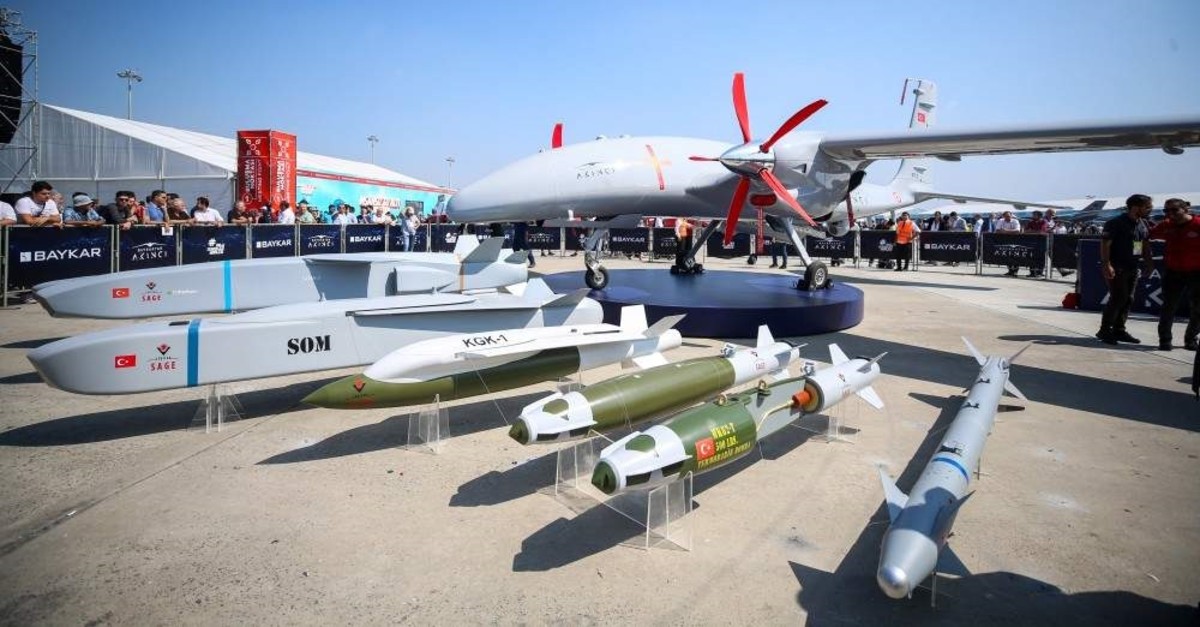 Several new aerial, naval and land systems will be added to Turkey's defense forces' inventories this year to further strengthen its defense capabilities

Crucial projects in the defense industry will continue in the new year, while several new vehicles and systems such as the newest armed drone Akıncı and the upgraded version of the domestically developed T129 Tactical Reconnaissance and Attack Helicopter (ATAK) will enter the inventory of the Turkish army, the Presidency of Defense Industries (SSB) announced Monday.

Speaking at a yearly evaluation meeting, Demir said the HİSAR-A low-altitude air defense missile system, the first domestic maritime missile ATMACA and Turkey's largest-ever warship, the TCG Anadolu, are some of the indigenously produced systems to be added to the inventory of the Turkish military throughout the course of this year.

The HİSAR air defense missile system was developed by leading defense contractors ASELSAN and ROKETSAN under the coordination of the SSB.

Developed by the leading unmanned aerial vehicle developer Baykar, the UAV Akıncı with two turbine engines can carry nearly 1.5 tons in a useful load, 900 kilograms external and 450 kilograms internal. Flying at an operational altitude of 40,000 feet, the Akıncı can stay in the air for 24 hours. The platform can be controlled via domestically developed satellites. The drone successfully completed its first test flight in December.

The Akıncı will also be equipped with an electronic support pod, air-to-air radars, a satellite communication system, barrier-identification radar, synthetic aperture radar and meteorological radar – all designed and developed in Turkey. The platform will operate with various ammunition configurations.

On the other hand, the Phase-2 configuration of the ATAK includes additional electronic warfare systems such as a laser warning receiver, a radio frequency jammer, a radar warning system and a 9681 V/UHF Radio. The ATAK is a new generation, tandem, two-seat, twin-engine helicopter specifically designed for attack and reconnaissance.

On the naval area, TCG Anadolu will be able to transport at least one battalion-size force to a determined location along with its logistical support and without the need to use a base. In addition, the test and training ship TCG Ufuk, and new types of boats will also be delivered.

The TCG Anadolu is being produced with a local content ratio of 68% and will be one of the world's most advanced aircraft carriers. The giant ship will be capable of traveling 14,500 kilometers without refueling. The vessel is intended to meet the various needs and requirements of the TSK, such as sustaining long-endurance, long-distance military combat or humanitarian relief operations.

Turkish defense firms will also complete their work on supply ship design and submarine modernization in 2020.

"There are new minor developments in our combat airplane project, but we will inform you when noteworthy progress is made," Demir noted.

The TF-X National Combat Aircraft (MMU) is being developed by Turkey's leading aerospace engine designer and manufacturer, Turkish Aerospace Industries (TAI), with an aim to replace the F-16 aircraft, which are in the inventory of the Turkish Air Force and are to be gradually deactivated as of the 2030s.

Among others, the TSK will start using next-generation land vehicles in 2020 such as the Kirpi-2 – a new version of a mine-resistant vehicle, mini-armored buses, armored ambulances and criminal investigation vehicles.

Turkey's first air-to-air missile Bozdoğan will be delivered after it undergoes test firing. Several tests for missile systems will also be completed in 2020.

Stressing that the SSB will continue to support deficient areas in the defense industry to cover the needs of the Turkish military, Demir said the institution will take steps in fields such as mini-satellites, sophisticated brake systems and antennas in 2020.

Demir said there are some technical drawbacks in the mass production of Turkey's first domestically made main battle tank Altay, adding that the search for alternatives regarding the engine and power packs is ongoing.

"After we take care of these issues, we will launch an 18-month process to start mass production," Demir said.

The tank will be manufactured by BMC, which produces various types of military vehicles, including tanks and armored cars, as well as commercial vehicles, buses and trucks.

Carrying out successful and custom-made projects to diminish the dependency on imported products and platforms, the Turkish defense industry has maintained its significant momentum in exports for the last couple of years.

As a result of expedited research and development activities and a range of products, the Turkish defense and aerospace industry carried its export performance to the top in 2019. According to the data obtained from the Turkish Exporters Assembly (TİM), the sector's exports soared 34.6% and hit $2.7 billion last year from $2.03 billion in 2018 – the first time defense exports surpassed $2 billion. Defense sales abroad, which totaled $360.3 million, observed the best monthly performance last year.

Demir also elaborated on the delivery of Russian S-400 air defense systems, saying that the first batch of S-400s will become operational by April.

"For the second delivery, we are still discussing issues such as joint production and indigenous identification friend or foe," the SSB head said.

Regarding Washington's reaction to Turkey's acquisition of the S-400, Demir said there is no clear explanation coming from the U.S. side for their opposition to the air defense systems.

"In fact, it is difficult for us to understand the relation between the F-35 fighter jet program and the S-400 purchase," he elaborated.

"As a partner in the F-35s, we stand behind our commitment. We insist that a biased decision is unlawful," he stressed.

The Russian missile system purchase has been a sticking point between Turkey and the U.S. for some time, as Washington has argued that the S-400 system would be incompatible with NATO systems and would expose its advanced fifth-generation F-35 jet to possible Russian subterfuge.

Turkey, however, emphasized that the S-400 would not be integrated into NATO systems and would pose no threat to the alliance, rejecting calls to back out of the deal. Ankara also stressed it was the U.S.' refusal to sell it Patriots that led the country to seek out other sellers, adding that Russia offered it a better deal, including technology transfers.