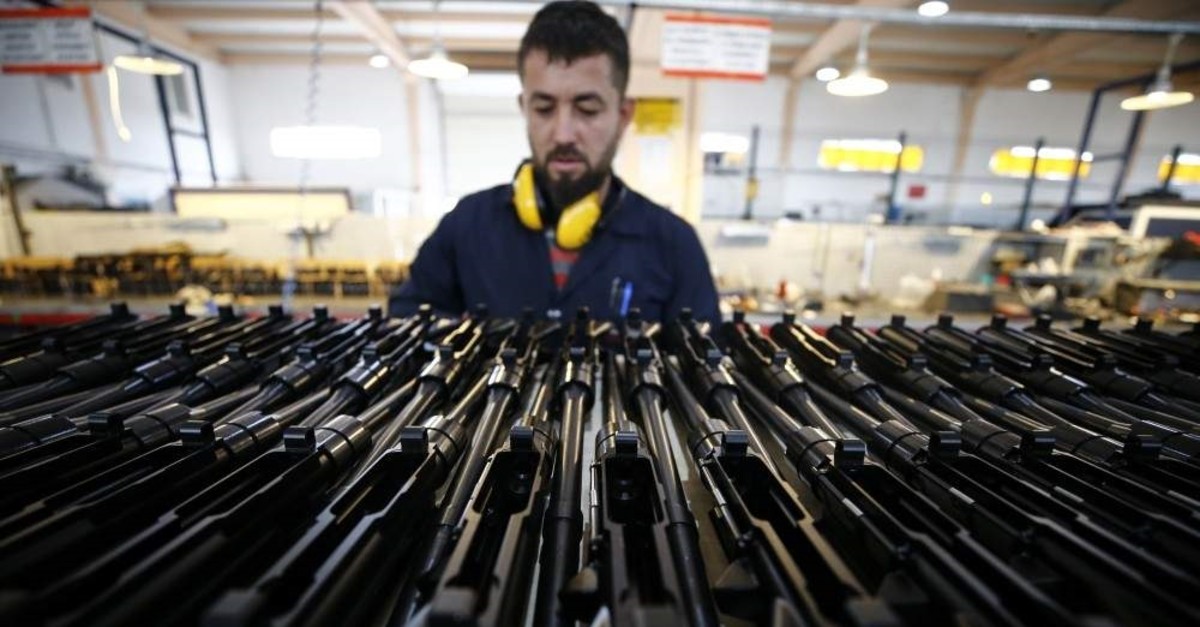 Having gained significant ground in recent years, the ever-growing Turkish defense industry took the lead and grabbed the largest share of investment incentives in 2019.

The amount of arms and ammunition investments reached nearly TL 1.83 billion in the January-November period of last year – a figure that is expected to have totaled TL 2 billion for the whole year.

Given the momentum, the size of investments incentivized in the defense industry in 2019 approached the total sum of the investments in the previous 18 years, according to a report in Turkish Dünya daily Tuesday. They particularly gained ground after 2010 amid the government's efforts to make the industry more indigenous in a bid to eliminate dependence on foreign suppliers.

A significant increase can be observed in both the number of projects and the projected investment amounts over the last decade. In November of last year alone, an incentive was provided for investment in design and manufacturing of weapons systems worth TL 633 million in the central province of Konya by one of the leading defense contractors ASELSAN and a local company Konya Savunma Sanayi A.Ş.

In November last year, another 14 projects, foreseeing an investment of TL 877.7 million, were also initiated. In the 11-month period of 2019, the amount of arms and ammunition investments reached around TL 1.84 billion in 63 projects.

One of the most striking developments in investment incentive data is the increase in arms and ammunition investments. Although there have been regular increases since 2015, 2019 was a year in which investments doubled, coming close to the sum of those in the previous 18 years.

Previously, weapons and ammunition investments predominantly came from public defense industry companies, and public projects were produced by the private sector through tenders by the then-Undersecretariat of Defense Industries (SSM), now called the Presidency of Defense Industry (SSB). Investments in the private sector were very limited, exceeding TL 100 million only once until 2011. After 2013, there were remarkable increases, with both the number of projects and investment amounts on the rise.

In the period of 2001-2018, the total investment value of the projects for the production of weapons and ammunition amounted to some TL 2.2 billion, while they reached TL 1.8 billion in the first 11 months of 2019 alone.

ASELSAN Konya Silah Sistemleri A.Ş. comes to the fore as the biggest investment with TL 633 million. The two agreed to combine forces and establish a company, namely ASELSAN Konya Silah Sistemleri A.Ş., as part of which a major facility will be built. 51% of the company is owned by ASELSAN and the other 49% by Konya Savunma Sanayi A.Ş. Investments of this size are said to gradually increase the arms and ammunition sector to the level of industries attracting major investments. Immediately after its establishment in November 2018, the company kicked off construction of its factory, a process currently underway.

The company was established "to carry out research, design, development and engineering activities for all kinds of weapons and weapon systems, especially defense industry products; to carry out the production, testing, installation and integration, sales and marketing, import and export of these weapons, weapon systems and defense industry products; to provide training, maintenance and after-sales services and to carry out all kinds of commercial and industrial activities related to these issues," the report said, citing the purpose of registration document.

In his earlier statement, the company CEO İbrahim Koyuncu said they looked to establish a strong defense industry ecosystem in Konya. The factory's 1.8 million-square-meter plot is an important industrial area, he said.

Among others, some 622 projects that foresee investments amounting to nearly TL 13.8 billion received investment incentive certificates in November 2019, Dünya reported, pointing to Turkish State Railways' (TCDD) TL 2 billion railway transportation project, Mersin Metropolitan Municipality's investment of TL 432 million, as well as investments by other municipalities and public institutions worth up to TL 200 million.

The November incentive list included 102 projects that foresee investments of over TL 20 million each. Among other major projects is the Diyarbakır Logistics Center Inc.'s investment of TL 482 million. The center had long been worked on and the investment incentive certificate points to the final start of the investment.