FM: Iran, Russia should be included in Syria’s political transformation 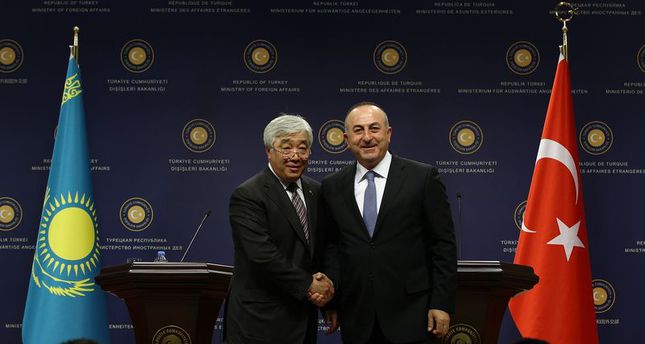 by Nurbanu Kızıl Dec 30, 2014 12:00 am
Minister of Foreign Affairs Mevlüt Çavuşoğlu has underlined that no country, including Russia and Iran, should be isolated from ensuring a political transformation in Syria, stating that everyone should contribute to the political transformation in the war-torn country. He made the comments on Monday at a joint press conference held with his Kazakh counterpart Yerlan Idrisov in Ankara.

Commenting about the planned meetings about Syria, which are expected to take place in Moscow shortly, Çavuşoğlu stated that Turkey acknowledges the National Coalition for Syrian Revolution and Opposition Forces as the legitimate representative of the Syrian people. He said that the meeting will be held between the opposition and Russian government to seek ways to resolve the ongoing conflict in Syria.

Çavuşoğlu reported that he and his Kazakh counterpart had talked about the crises and significant events in Ukraine, Syria, Iraq, Iran and Afghanistan and throughout the region. He stated that Kazakhstan and Turkey share similar views in terms of addressing international issues and noted that Kazakhstan has played a constructive role in the efforts to ensure regional and international stability.

Turkey supports Kazakhstan's membership in the United Nations Security Council for the 2017-2018 session according to Çavuşoğlu, who noted that both countries share a common history and cultural heritage.

Turkey and Kazakhstan are part of the High Level Strategic Cooperation Council which was established with the aim of strengthening economic and diplomatic cooperation mechanisms between Turkey and 16 countries including Iraq, Kazakhstan, Russia and Brazil. It has been reported that Turkey's trade volume with these respective countries has increased by seven-fold since 2002.

The last meeting of the council was held in Ankara on December 25 with Prime Minister Ahmet Davutoğlu and his Iraqi counterpart Haider al-Abadi in Ankara, while the next meeting is expected to be held in Astana with the participation of President Recep Tayyip Erdoğan and Kazakh President Nursultan Nazarbayev.