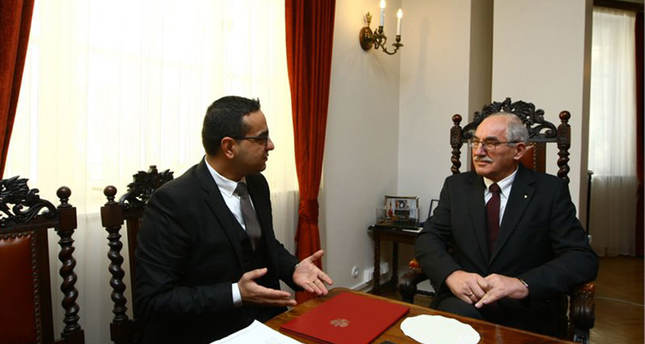 In an exclusive interview with Daily Sabah, Polish ambassador to Ankara Mieczyslaw Cieniuch said that Turkey’s power in the region is a significant motive for its citizens to support its EU bid and that Poland has been one of the biggest supporters of Turkey in its long-continued EU accession period

The relationship between Turkey and Poland has historical roots, and in 2014, both countries celebrated the 600th anniversary of bilateral relations with various events. In addition to strong historical relations, Poland and Turkey share the same vision in NATO, and Poland is also one of the biggest supporters of Turkey's E.U. accession bid. To further discuss Turkish-Polish relations, Daily Sabah sat down with the Polish ambassador to Turkey, Mieczyslaw Cieniuch, and talked about numerous topics, including the present and future of Turkish-Polish relations.

Do you believe that all Turkish and Polish citizens are aware of the importance of the 600-year-long relationship between the countries?

Indeed we have celebrated the 600th anniversary of diplomatic relations; it is definitely an important matter due to the length of time. This year marks the 601st anniversary of diplomatic relations. Turkey and Poland are very popular in the other country, the average Polish citizen talks about Turkey very often, and most of the time it is very positive. Turkey plays an important role in Polish history. Historians have evaluated the diplomatic relations and discovered that throughout the 600 years, only 25 years of the relationship involved wars or disputes. The rest of the 575 years involved peaceful, beneficial cooperation that we now can notice. As Polish citizens, we value history very much that we teach our children in elementary schools, and therefore, when looking at history, it is evident that Turkey plays a positive role. Despite the conflicts during those 25 years, Turkey, generally speaking, has played a positive role.

Secondly, Turkey is a popular destination for Polish citizens. Every year, half a million Polish citizens visit Turkey for holiday, and due to the positive environment in Turkey, generally speaking, our citizens leave with positive thoughts. Due to Turkey's busy agenda, you will always find something about Turkey in the Polish media. Although some news is positive and some is negative, Polish people are able to freely select the information that they gather on Turkey. Since Turkey has twice the population of Poland and has twice the issues within it, it is hard to expect Turkish people to recognize the popularity of Poland. However, we aimed to deliver more information on Poland to Turkey during this 600th anniversary. Last year, we organized numerous events, such as concerts, plays and many other celebrations to provide awareness of Poland. Turkey definitely is more attractive than it was two to three years ago.

Do you think the current state of the relationship is fulfilling for both countries? What are the main areas that we need to improve on?

In my opinion, one of the areas in which we should improve is the economic relationship between Turkey and Poland. Since bilateral relations in terms of economy are not well developed between the countries, we still have room for improvement.

Also, our trade exchange is not bad. In fact, in 2013 it was $5.3 billion and in 2014 we expect this number to be higher. This progress is seen in our economic relations. However, I believe this progress is not enough.

On the other hand, when we compare our trade exchange from the last 10 years, it is evident that it has improved six times over. The progress is good but not good enough. Turkish exports to Poland have increased, but this is not very significant; the trade exchange is more important. Total Polish exports in December 2014 were $156 billion, but only $3 billion of this was to Turkey. Therefore, we have room for improvement even though it is easier for us to export to the EU and the U.K.

For 2015, we are aiming for $168 billion of exports, and this means that the potential is quite big. Also, exports to Turkey aren't easy, not only due to geographical distance, but also because of the difference in systems and regulations. That is why our exporters are mainly selling to Turkey what they cannot sell in the EU. But this does not mean they are bringing in bad things, it's just due to the regulations of the EU. The same applies for imports as well.

In the 1980s Poland was behind the Iron Curtain, and you managed to become a member of the EU in 25 years. What can Turkey learn from Poland's experience?

For Poland, membership in NATO and the EU was a goal that was accepted by the whole society. I remember at that time more than 80 percent of the population supported the idea of membership in NATO. There was the same situation for EU membership as well. Namely, politicians had to do this due to large support from society. After the Soviet Union collapsed, our country chose its place in between Russia and NATO. It was understood that we should join European society. It was the same for the EU. Our society wanted to improve their level of life, the prosperity of the country. It was the best solution for Poland. That's why there was a high percentage in favor of joining the EU. I think Turkey must have large support from the population to join the EU. There is support below 50 percent, which means that society is not keen on the issue. If Turkey aims to join the EU, politicians should attract people with its benefits. Society should be aware of the profits that integration could bring in numerous aspects -- social, political and economic, among others.

Of course being part of the EU does not only yield benefits, but also brings many obligations. Antagonism with Brussels happens quite often and is not very comfortable for member states, but you have to follow through because it is part of a legal system. In some cases you need to put some state preferences behind the requirements from Brussels.

Turkey is a big country and a regional power, so making a suggestion for Turkey is quite complicated and would not be direct advice. But first of all, the population must be convinced of the idea of joining the EU. Later on they can push political parties to do the same.

Political parties and leaders can provide it, but society's experiences are an important factor. In Poland, more than half of the population has been to Western countries such as the U.S., U.K., Germany or France and has found the opportunity to compare the situation. Accordingly, they thought that the situation there was much better and said, "Let's do the same." Namely, public support can be organized by people's personal experiences.

After the Russian annexation of Crimea, discussions regarding the return of the Iron Curtain began among numerous academics. As the former chief of general staff of the Polish armed forces, how would you comment on that?

I am a man who remembers that time when the Iron Curtain divided Europe. I can definitely say that those were very bad times for everybody. The situation was not good for people from the East or the West. This means it was a bad experience. We try to avoid making the same happen again. But in my opinion, the Iron Curtain's coming back is not possible. The situation has changed, people are 25 years older, and there is a new generation in our country.

Maybe the Iron Curtain is not possible, but it does not mean that other material making a curtain is not possible as well. No matter from what material it is, a curtain might divide countries and, again, it will not be beneficial. That's why we should avoid this. But everything does not depend on our intentions. There are political and social causes that may be against our intentions or happen without our influence.