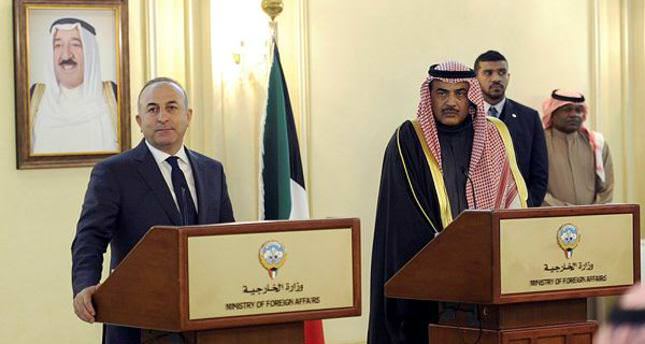 During his visit to Kuwait, Foreign Minister Mevlüt Çavuşoğlu highlighted Egypt's importance for its region and said his country objects to the current "coup state" Egypt is in.

Çavuşoğlu held a joint press conference with his Kuwaiti counterpart Sabah al-Khalid al-Sabah on Sunday. When asked about how Egypt's renewing its relations with Gulf countries would affect Turkey, Çavuşoğlu said Egypt is an important country in the Muslim world, Middle East and the Arabian Peninsula. "We object to the current state Egypt is in today. The current administration in Egypt is harmful to the country's stability and security," Çavuşoğlu said.

"If Egypt reverses the current situation they are in, we will fix our relations with them, too," he said.

Turkey had put forth conditions indicating that normalization of relations with Egypt would be unlikely in the immediate future, unless the country goes back to "full democracy."

Çavuşoğlu also lauded the relations between Kuwait and Turkey, saying that the two countries' political ties are "perfect."

"Kuwait does not leave out the humanitarian effects of regional problems," Çavuşoğlu said, "Especially Kuwait's role on resolving Gulf countries' problems is applaudable."

He also underscored the economic relations between the countries saying that the trade volume between Kuwait and Turkey needs to be "as perfect as political relations."

He said mutual investments and Turkish firms' projects in Kuwait are playing a great role in achieving the desired boost in the volume of trade.

Çavuşoğlu said that Turkey has strategic dialogue mechanisms with the Cooperation Council for the Arab States of the Gulf (GCC) and that Turkey would like to hold a strategic cooperation meeting during the upcoming sixth summit of the GCC, when Qatar will be the host country.
He also mentioned the fight against the Islamic State of Iraq and al-Sham (ISIS) saying the group threatens regional stability and security and needs to be dealt with.

"We are on the same page as Kuwait on regional issues. We will act together to overcome the dangers lying ahead," he said.

Çavuşoğlu had earlier been received by the Emir of Kuwait, Sheikh Sabah al-Ahmad al-Jaber al-Sabah, and Marzouq al-Ghanim, the speaker of the Kuwaiti National Assembly.