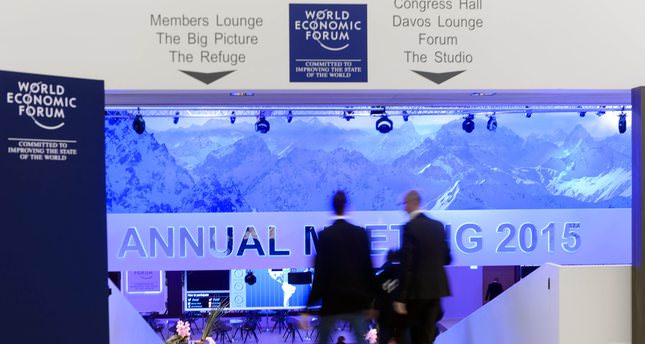 Attending the meeting on Thursday, January 22, Davutoğlu will represent Turkey at the prime ministerial level, the first time Turkey has been present with a top official in six years after the incident that is known as "Erdoğan's one minute."

At the 2009 summit, the-then prime minister and current president, Recep Tayyip Erdoğan, stormed out of the panel on the war in Gaza after slamming the Israeli President Shimon Peres and the invasion of the Gaza Strip. Erdoğan also vowed that he would not attend the Davos forums anymore. This incident became the first in a chain of events leading to the deterioration of Turkish-Israeli relations. Along with this break in relations, Babacan started to represent Turkey at the annual WEF meetings between 2010 and 2014.

Entitled "the New Global Context," Chairman of the Turkish Union of Chambers and Commodity Exchanges (TOBB) and the B20 Turkey liaison, Rifat Hisarcıklıoğlu, will represent the Turkish business community along with Güler Sabancı, Ferit Şahenk, Hüsnü Özyeğin and Ali Koç along with the heads of trade groups among the B20 task forces.

At the session called "The Improvement of the G20 Agenda," which will be held on January 22, Davutoğlu will give the closing keynote speech that will discuss the priorities set by Turkey as the 2015 secretariat and the related agenda.

Turkey assumed the leadership of the G20 international economic forum for one year on December 1, 2014.

Another session is also scheduled for January 23, when a reception will be held in honor of Davutoğlu, also hosting CEOs and representatives of international organizations. During the reception, more than 150 global names in business, governance and humanitarian work will hear about B20 Turkey's plans.

B20 Turkey also founded the International Business World Consultancy Council, which the previous secretariats of the B20 had not put into practice before. In this council, various influential businessmen from the G20 countries will be hosted. The council's CEO will be Muhtar Kent, the CEO of Coca-Cola, and the council will present suggestions from the heads of trade groups among B20 task forces to G20 governments.