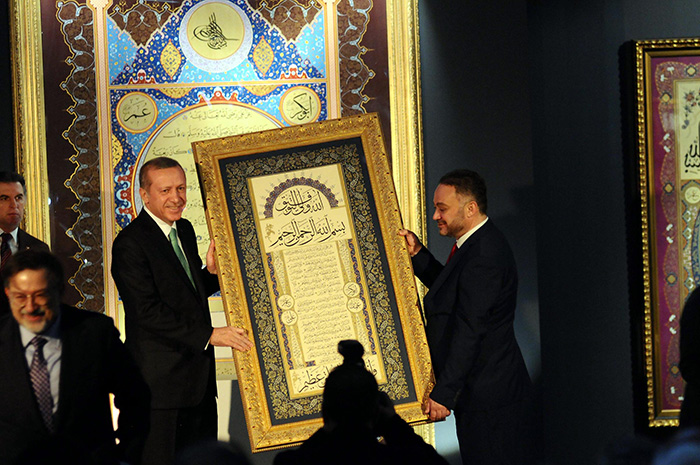 by Daily Sabah with AP Mar 04, 2015 12:00 am
President Recep Tayyip Erdoğan has said that the extremist militant Islamic State of Iraq and al-Sham (ISIS), which controls large parts of Iraq and Syria, is targeting to destroy all aspects of Islamic civilization and culture.

Speaking at a classical arts exhibition in Istanbul on Wednesday, Erdoğan drew attention to ISIS atrocities and stressed how the militant group set ablaze a library in Mosul that had 8,000 "precious" books and rare manuscripts. "Similar incidents also took place in Timbuktu in Mali [by Boko Haram]. Despite such massacres and wounds throughout history, our civilization has succeeded to continue its existence," he said.

"An Iraqi friend of mine told me how ISIS burned down the library and he also said that the militants also set shrines and mosques on fire," said Erdoğan, adding that after seeing the artwork in the exhibition, he is more optimistic about the future of Islamic civilization and such atrocities will not succeed in their efforts to harm the Islamic world.

ISIS, which controls large swathes of Syria and Iraq and aims to expand its influence in several parts of the Muslim world, introduces itself as practicing true Islam, but Islamic scholars disagree with the group.

An estimated 20,000 militants have streamed into the territory in Iraq and Syria where ISIS has proclaimed a caliphate, ruled by its often brutal version of Islamic law. The group itself has assumed the mantle of Islam's earliest years, purporting to recreate the conquests and rule of the Prophet Muhammad and his successors. It has been argued, however, that its ideology is a virulent vision all its own, one that its adherents have created by plucking selections from centuries of traditions. The vast majority of Muslim clerics say the group cherry picks what it wants from the Quran and from the hadith – accounts of the Prophet Muhammad's actions and sayings. It then misinterprets many of these, while ignoring everything in the texts that contradicts the hand-picked selections, these experts say.

Writings by the group's clerics and ideologues and its English-language online magazine, Dabiq, are full of citations from the Quran, hadith and centuries of interpreters, mostly hard-liners. These are often further taken far out of context, said Joas Wagemakers, an assistant professor of Islamic Studies at Radboud University Nijmegen in the Netherlands. It would be a mistake to conclude ISIS's extremism is the "true Islam" that emerges from the Quran and hadith, he added.


Despite its claim to the contrary, ISIS is largely political, borne out of the conflicts in Syria and Iraq, said Khaled Abou el-Fadl, an Islamic law scholar at the University of California Los Angeles. The group, he said, is trying to make God "a co-conspirator in a genocidal project." Ahmed al-Dawoody, an assistant professor at the Institute for Islamic World Studies at Zayed University in Dubai, agreed.

ISIS not only misreads the texts it cites, most clerics say, it also ignores Quranic verses and a long body of clerical scholarship requiring mercy, preservation of life and protection of innocents and setting out rules of war, all of which are binding in sharia. Many mainstream clerics compare the group to the Khawarij, an early sect that was so notorious for "takfir," or declaring other Muslims heretics for even simple sins, that it was rejected by other Muslim groups. In June, ISIS militants declared a caliphate in the lands it controls in Iraq and Syria, with its leader Abu Bakr al-Baghdadi as caliph, a declaration roundly ridiculed by Muslim clerics of all stripes. But here too, the group went further, saying that Islam requires the existence of a caliphate and anyone who refuses to recognize its declaration is not a true Muslim. "The hopes of the caliphate became an undeniable reality," the group proclaimed in its online magazine. Any Muslim who refuses ISIS authority will be "dealt with by the decisive law of God." After that, the stream of ISIS recruits swelled by the thousands.
Last Update: Mar 04, 2015 5:09 pm
RELATED TOPICS