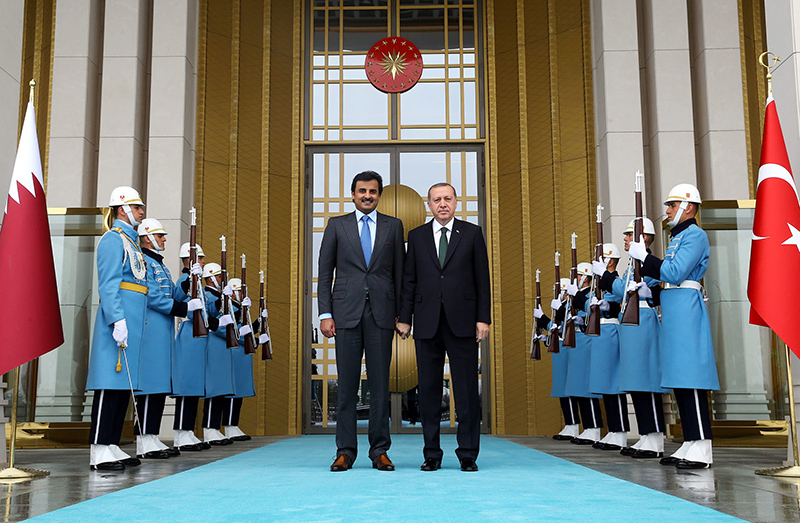 by Daily Sabah Mar 12, 2015 12:00 am
Qatari Emir, Sheikh Tamim al-Thani, paid a surprise visit to Ankara on Thursday afternoon and held a meeting with President Recep Tayyip Erdoğan at the Presidential Palace.

In September, Erdoğan paid a two-day visit to Qatar to discuss bilateral ties and economic relations between the two regional allies, as well as to hold talks over various regional issues, including the threat posed by Islamic State of Iraq and al-Sham (ISIS) militants and the worrisome situation in war-torn Gaza.

Among the most significant allies of Turkey, Qatar is the third country Erdoğan visited as president, and the first in the Middle East, following Turkish Cyprus and Azerbaijan in early September. Erdoğan was accompanied on his visit by Energy Minister Taner Yıldız and National Intelligence Organization (MİT) head Hakan Fidan.

Relations between Turkey and Qatar have developed further in the last couple years as the two countries have found themselves on the same side regarding the Syrian crisis and the Egyptian coup. Turkey was one of the most vocal critics of the Egyptian coup that ousted President Mohammed Morsi, and Qatar was the sole Gulf state that raised its voice against the coup.

During Israel's Gaza offensive, the U.S. held meetings with Qatar and Turkey, the two countries that showed the strongest support for war-stricken Palestinians in Gaza. Although Qatar, along with Turkey, had been the only country that opposed the coup and Abdel-Fattah el-Sissi's rule, at a Gulf Cooperation Council (GCC) meeting held this month, Qatar reversed its policy on Egypt and pledged support for el-Sissi.