Armenian genocide resolution introduced to US Congress amid Turkish-American criticism 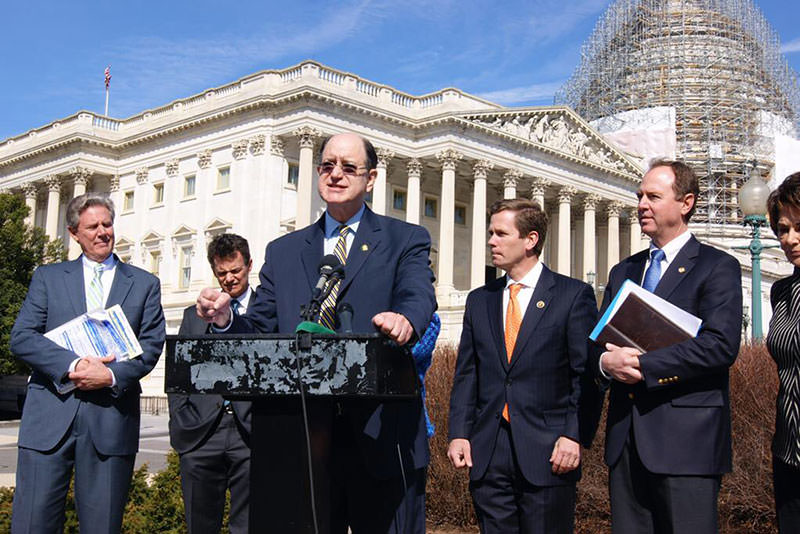 by Ragıp Soylu Mar 19, 2015 12:00 am
A bipartisan group of Congressmen on Wednesday introduced the Armenian-lobby-backed controversial Armenian Genocide Truth and Justice Resolution and faced harsh criticism from leaders of the Turkish-American community.

Reps. David G. Valadao (CA-21), Robert Dold (R-IL), Adam Schiff (D-CA) and Frank Pallone (D-NJ), along with 39 other Members of the House of Representatives publicized House Resolution 154 with a press conference in front of Congress. Rep. Schiff said that the draft resolution, if passed by Congress, would officially recognize the Armenian genocide and call upon President Obama to work with the Turkish and Armenian governments to bring about the reconciliation based upon full acknowledgment of the historic fact of "Armenian genocide."

Representatives declared last month that they would be introducing the resolution on February 24, which accuses the Ottoman Empire of committing genocide in 1915 by killing 1.5 million Armenians, but they failed to find enough signatories.

The Turkish Institute for Progress (TIP), a New York-based increasingly influential Turkish-American association, condemned such "divisive tactics" implemented by the Armenian National Committee of America (ANCA) and said that the resolution undermines U.S. interests and jeopardizes the chance for peace and reconciliation between the Turkish and Armenian communities. TIP adviser and former U.S. Representative, Solomon P. Ortiz, said, "We ask the Armenian Diaspora and the powerful lobbying groups behind them to cease the tactics that create further conflict and join us in our mission to look toward the next hundred years."

The resolution, marking the 100th anniversary of the 1915 incidents, recalls President Barack Obama's early remarks on the issue before entering the office, when he stated that he firmly held the conviction that the Armenian Genocide is not an allegation or a personal opinion but rather a widely documented fact. The resolution also blames the Turkish government for the collapse of diplomatic reconciliation between Turkey and Armenia by quoting then Secretary of State Hillary Clinton's statements, "the ball remains in Turkey's court."

İbrahim Uyar, co-chair of the Turkish American Steering Committee – a joint endeavor of 145 Turkish American organizations – said that the resolution might not succeed. "Armenians clearly see that the Congress will not pass the resolution. They have a new date, which is 2023, the 100th anniversary of Turkish Republic, to complete their task. This is why they focus more on state-level resolutions in New Jersey and Massachusetts."

The Armenian lobby recently increased its pressure on Turkish communities abroad and has sometimes used somewhat bold tactics. The Turkish Ambassador to France Hakkı Akil was attacked with a cup of pomegranate juice by a French-Armenian protester on March 2 during his talk on "Secularism in Turkey and France" at the faculty of law at Paris Descartes University. An Armenian publication recently targeted Congressman Bill Schuster because of his refusal to become one of signatories of the Armenian resolution. Publisher of the Armenian community daily, The California Courier, said that Armenians should apply "such pressure" to Bill Schuster to create an example showing other representatives that they too would be targeted for defeat. The same newspaper called on Armenians to pressure American companies to cancel their official contract with the Gephardt Group, one of Turkey's lobbying firms.