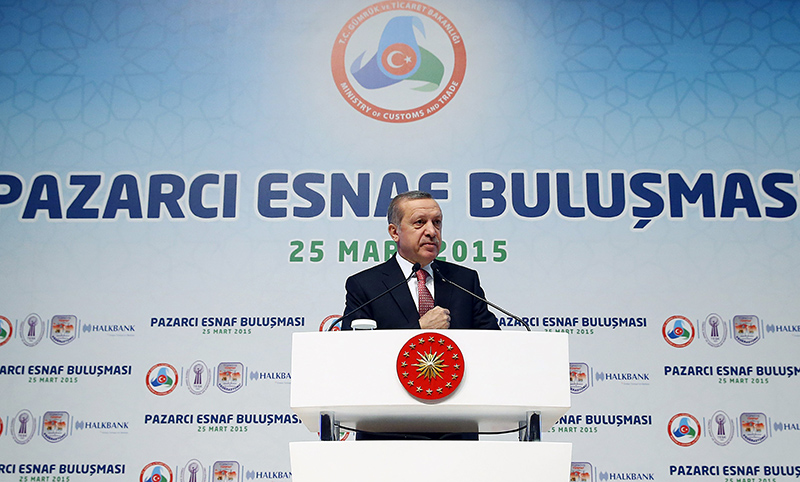 by Daily Sabah with AA Mar 25, 2015 12:00 am
President Recep Tayyip Erdoğan has dismissed criticism that a new presidential system will bring a dictatorship of a one-man state, highlighting the use of similar systems in various Western countries like the U.S. where democracy is applied.

"They instantly begin saying, 'one-man state and dictatorship.' Is there a dictatorship in the U.S., Mexico, Argentina, Brazil or France? Why does it become a dictatorship in Turkey when it isn't so in those countries?" Erdoğan said at a trade meeting in Ankara on Wednesday.

Erdoğan has reiterated at every opportunity that a presidential system is a necessity for Turkey claiming that the current parliamentary system is a serious hindrance to the government. He has been the target of accusations from the opposition for favoring the idea, which asserts that it is Erdoğan's personal aspiration to enhance his authority. However, Erdoğan has slammed the opposition's speculations that he desires a one-man state and has briefed society on and off about the benefits of a switch in a number of speeches.

"Know this: An elected president who will answer to his people for every one of his actions cannot become a dictator or a one-man [state]," Erdoğan said.

The Turkish political scene has been debating whether the country needs a presidential system, a move strongly backed by the government and Erdoğan.

Erdoğan was prime minister and chairman of the ruling Justice and Development Party (AK Party) for 12 years until August 2014 when he was elected president. Since his campaigning last year he has been pushing for a far-reaching, new constitution or amendment to allow for a new presidential system in Turkey.

On Wednesday, the president repeated his call for 400 members of Parliament from one party to form a large enough majority in the house to legislate the drafting of a new constitution for Turkey, which would include a presidential system.

Erdoğan's remarks regarding the presidential system and his interest in other political topics have been controversial, with critics taking as reference the decorum of the traditionally symbolic office of the presidency. In response, Erdoğan said he did not want to be a passive president.

Turkey is approaching parliamentary elections on June 7. A constitutional amendment or a new constitution is needed to set up a presidential system in Turkey. The country's current Constitution was drafted two years after a military takeover in 1980 and numerous amendments have been made to it since.

Throughout modern Turkish history, the government system has been a hotly-debated issue that commenced with the eighth president, Turgut Özal, continued with the ninth president, Süleyman Demirel, and has been brought up again by Erdoğan who asserted that a presidential system is more suitable for the country's political structure.

With only months left before the June 7 national election, the AK Party has stepped up its efforts to shift the political structure toward what it believes to be a more comprehensive and applicable presidential system. While subcommittees were established to create an effective election campaign, it appears that a presidential system will be the most attention-grabbing promise ahead of the election, since the party is in search of an amendment that will be easily adapted to Turkish politics.