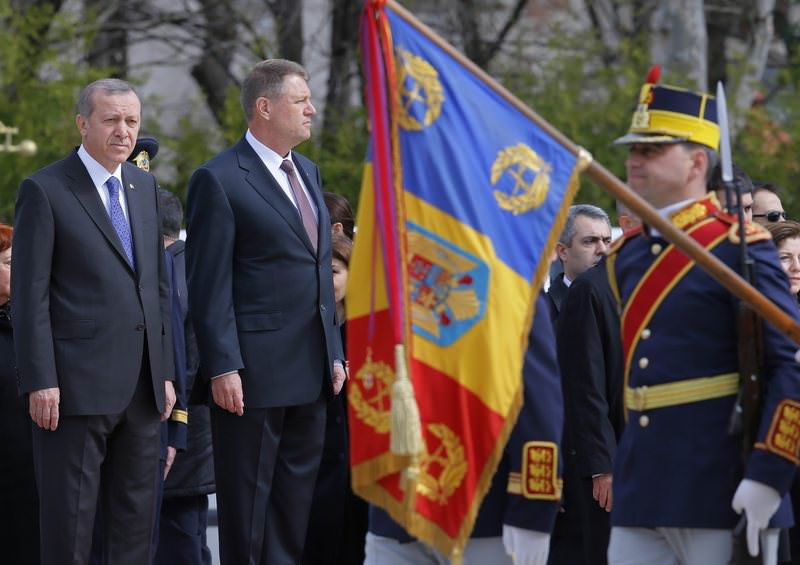 by Daily Sabah with AA Apr 01, 2015 12:00 am
Turkish President Recep Tayyip Erdoğan visited Romania, where he was welcomed with an official ceremony by Romanian President Klaus Iohannis, to hold official talks to strengthen ties and boost cooperation.

Erdoğan's last stop on his triple visit was Romania, which maintains pleasant relations with Turkey and is hoping for fresh opportunities for cooperation. The two countries, which already enjoy a level of "strategic partnership," are aiming to boost cooperation and strengthen relations. The Romanian president has expressed his support for Turkey's EU bid owing to the strong relationship the duo have. Erdoğan's visit to Romania was preceded by two respective visits to Slovenia and Slovakia, who also back Turkey's accession to the EU.

Romanian President Iohannis, ahead of Erdoğan's visit to the country, had said the level of bilateral ties in political, strategic and economic fields was of key importance to Romania. He stated that relations with Turkey have been dynamically rising since 1989 and after 2011 ties have been at a strategic partnership level.

Iohannis also added that the economic partnership with Turkey was of key importance: "Outside the EU, Turkey is Romania's largest partner in exports and 11th in imports."

The current trade volume between the two countries is $6 billion, according to the president.

"We aim to make this amount rise to $10 billion in the next four, five years," he added.

He stated that Turkish companies have invested at least $5.5 billion in Romania, yet "the potential of investments has not yet been captured."

To gain membership to the bloc, Turkey must successfully conclude negotiations with the EU in 35 policy "chapters," which include reforms and the adoption of European standards. A total of 14 chapters have been opened to date while 17 remain blocked and another four have yet to be discussed.

Meanwhile, Erdogan cut short official talks Wednesday in Romania following the slaying of a Turkish prosecutor who was held hostage at an Istanbul courthouse Tuesday.

Mehmet Selim Kiraz, 46, died at Istanbul's Florence Nightingale Hospital after being shot multiple times in the head and body by two terrorists who held him hostage on Tuesday at midday in his office at the courthouse. The terrorists were later killed by police.