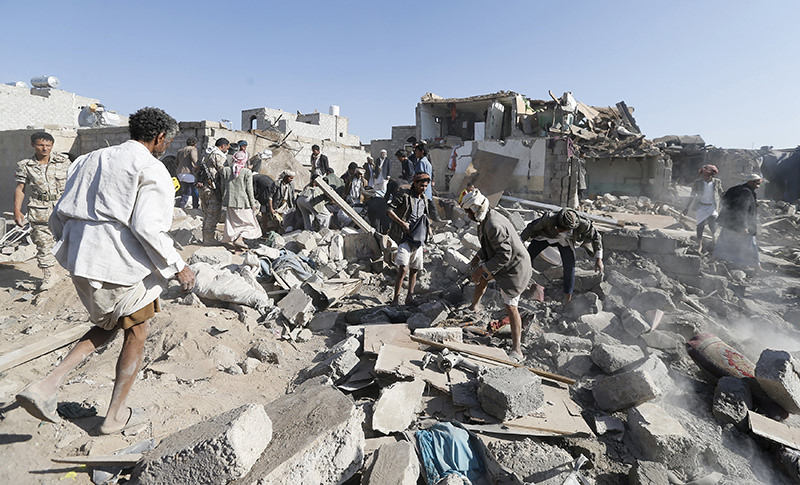 by Anadolu Agency Apr 07, 2015 12:00 am
Turkey can adopt a mediating role and make considerable contributions to negotiations in Yemen, Foreign Minister Mevlüt Çavuşoğlu said in reference to the current turmoil in Yemen, which has intensified with the ongoing Saudi-led military operation against rebels.

Highlighting that Turkey has previously played a significant role in hampering scores of conflicts by adopting measures that have led to an increase in trust in the country, Çavuşoğlu said that Turkey can play a similar role in defusing the crisis in Yemen as well.

"Turkey can play a significant role [in the Yemeni crisis] and mediate [between the sides]," Çavuşoğlu said, warning that intervention by Turkey and consensus on the matter with Iran is not efficient enough to stabilize the region. He underlined the necessity for all sides to work together to resolve the issue.

He stipulated: "Only if everyone leans toward negotiations can we contribute to the issue."

Saudi Arabia launched an air campaign in Yemen targeting Shiite Houthi rebels who are believed to be backed by Iran. The strikes have already targeted an air base near the airport in the capital Sanaa as well as anti-aircraft positions and military bases and have flattened a number of homes near the airport, killing dozens of civilians. The Houthis have mobilized thousands of supporters in protest against the strikes.

Iran has been accused of arming the Houthi rebels, but has denied the allegations and noted the civilian toll of the airstrikes. "This invasion will bear no result other than the expansion of terrorism and extremism throughout the whole region," Iranian Ministry of Foreign Affairs Spokeswoman Marzieh Afkham said in a statement.

"Iran's sectarian approach toward [Yemen] will drag the region into a catastrophe," Çavuşoğlu warned. President Recep Tayyip Erdoğan has also said that conflicts in the region and Yemen have evolved into sectarian clashes and urged Iran to withdraw following the outbreak of the operation.

"If we learn our lesson from Syria, Iraq and Yemen, then the crisis could soon be solved through negotiations, but if everyone continues looking through their own perspective, a solution cannot be reached," Erdoğan said, adding that the problem should be solved in terms of Yemen's territorial integrity.

Çavuşoğlu also commented on Erdoğan's visit to Iran and said despite dissent between the two countries on specific matters, there is a "significant brotherhood."

"The ties Turkey has with Iran cannot be questioned," Çavuşoğlu said, and added that cooperation between the two countries will contribute to the stability in the region.