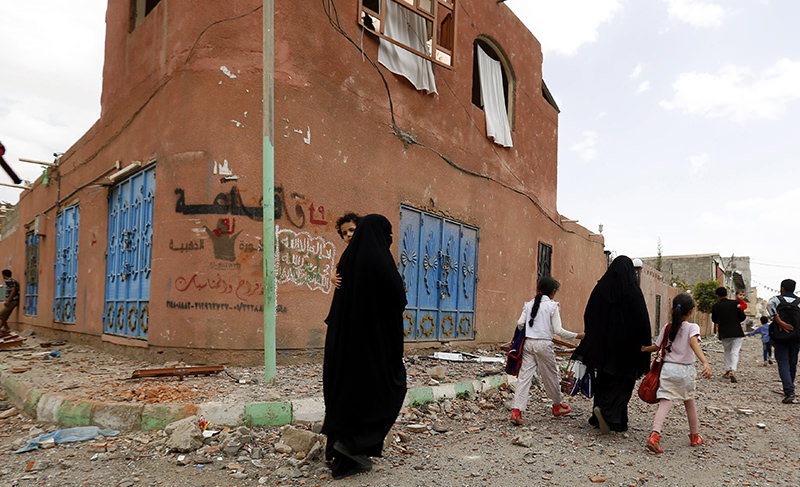 | EPA Photo
by Anadolu Agency Apr 09, 2015 12:00 am
Turkey and Pakistan have turned to political dialogue in an attempt to resolve tensions surrounding the conflict in Yemen between Houthi militias and Saudi-led coalition of Arab countries.

Turkey has been in close contact with regional and international powers to seek a solution in Yemen which includes all the country's parties, while not overshadowing its territorial integrity.

Pakistan's Prime Minister Nawaz Sharif said at a press conference as he visited Ankara on April 3: "The current situation in Yemen has been deteriorating. We are concerned that the legitimate government in Yemen was toppled by the use of force by non-state actors.

"The situation now threatens the unity of the Muslim Ummah (global community of Muslims) and has implications for the whole region."

He said Islamabad seemed to have adopted a stance in accordance with that taken by Turkey through its contacts with Iran and Saudi Arabia.

"We have been in constant touch with the Turkish leadership to resolve the Yemen crisis," said Sharif, who held talks with President Recep Tayyip Erdoğan and Turkish Prime Minister Ahmet Davutoğlu in the Turkish capital of Ankara last week.

The reason Pakistan is "waiting for the cat to jump," is because of the 30 million Shia people living in Yemen.

Pakistan, a Sunni-majority country, has a long history of sectarian violence as thousands of Shias and Sunnis have been killed in suicide bombings, blasts, and targeted killings over the last three decades.

Davutoğlu also repeated that Ankara's stance was against the disintegration of all sectarian and ethnicity-based groups in countries.

Davutoğlu said: "Both Turkey and Pakistan wanted to protect peace and stability in the region; prevent any further escalation of sectarian conflict and enable people in the region to live in harmony.

"We all observe that such break-ups ruin the structure of countries in the region, disturb the public order and pave the way for wide-scale tensions and terrorist threats in the region."

Saudi Arabia has been leading a coalition of Arab countries - all of them U.S. allies - to launch airstrikes against Houthi positions for the last two weeks.

Riyadh said the strikes were in response to calls by Yemeni President Abd Rabbuh Mansour Hadi for military intervention to "save the (Yemeni) people from the Houthi militias".

Fractious Yemen has been in turmoil since last September, when the Shiite militants overran Sanaa, from which they have sought to extend their influence to other parts of the country.

Some Gulf countries accuse Shiite Iran of supporting the Houthi insurgency which has forced Hadi to flee the country.

Meanwhile, U.S. Defense Secretary Ashton Carter confirmed on Wednesday that the U.S. was resupplying arms and equipment to a Saudi coalition striking Houthi rebels in Yemen, following conflicting remarks from the State Department.

Pakistan's policy towards Yemen has been closely followed by Egypt and Iran as well.

Egypt's Defence Minister Sidqy Sobhy held meetings on Wednesday with Pakistan's Chief of the Army Staff Raheel Shariff and some other Pakistani generals, with regional security being the key priority, which will continue on Thursday.

Meanwhile, Javad Zharif, Iran's Foreign Minister, has gone to Islamabad to "curb the enthusiasm" of Pakistan's involvement in the Yemen crisis.

Zarif is expected to urge Islamabad to exhibit a "mild attitude" towards Yemen.