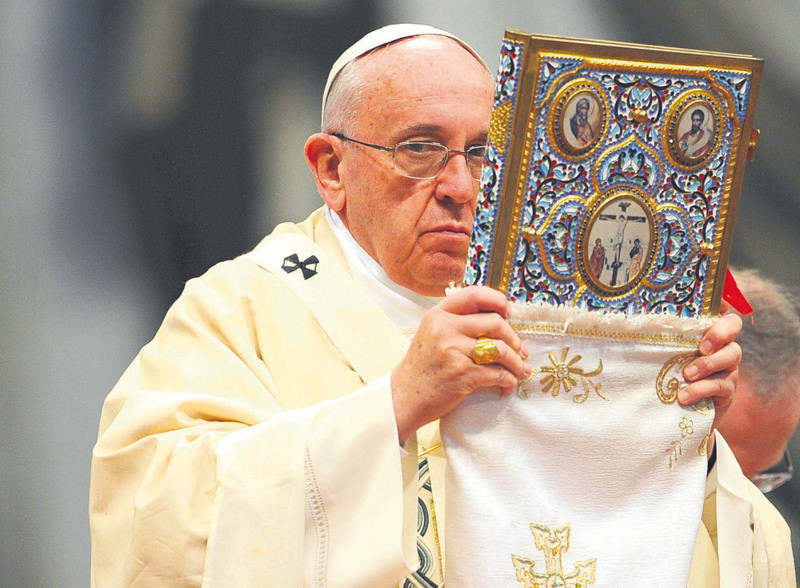 Pope Francis’s decision to refer to the 1915 events as genocide led to a serious backlash from Turkey, which believes he is under the influence of the Armenian diaspora and has lost all semblance of an impartial advocate to spur Turkish-Armenian rapprochement

Pope Francis labeled the 1915 incidents, which Turkey describes as a mass forced deportation of Armenians from Anatolia during World War I, as genocide, during a special Sunday Mass to commemorate Armenian lives lost in the 1915 incidents 100 years ago. His remarks prompted a harsh response from Ankara, which later recalled its ambassador from the Vatican in reaction. Pope Francis, who was the first foreign guest welcomed by President Recep Tayyip Erdoğan at the new Presidential Palace, risked deteriorating ties with Turkey by discussing a matter that is often greatly politicized. "In the past century, our human family has lived through three massive and unprecedented tragedies," the pope said during the Mass at St. Peter's Basilica to commemorate the 100th anniversary of the incidents. He continued by referring to the mass killings of Armenians as "the first genocide of the 20th century." Some think the pope's comments are a reciprocation of efforts the Armenian diaspora has exerted to define the incidents as genocide ahead of the centennial commemorations.

His comments have triggered tensions with Turkish officials who have slammed the pope for "igniting hatred" when his position, they said, requires easing tensions and forming bridges between the two communities.

Prime Minister Ahmet Davutoğlu, speaking at a closing ceremony in Istanbul, said: "Only highlighting one side's suffering during wartime and discriminating the other's pain is not appropriate for the pope and the authority that he holds."

The Foreign Ministry summoned the Vatican's envoy to Ankara and recalled its ambassador to the Vatican for consultation and related the message that the incident has caused a "loss of trust" and would be met with a response. The Foreign Ministry also released a statement regarding the incident, saying: "Pope Francis, who has defended the opinion of building peace and friendship between different groups around the world since the day he was assigned as pope, has discriminated people's suffering, overlooked atrocities that Turks and Muslims suffered in World War I and only highlighted the suffering of Christians, especially that of the Armenian people."

Foreign Minister Mevlüt Çavuşoğlu also slammed the pope's statement earlier in the day on social media, saying: The pope's statement, which is out of touch with both historical facts and legal basis, is simply unacceptable. "Religious offices are not places through which hatred and animosity are fueled by unfounded allegations," Çavuşoğlu posted on Twitter. He also said: "The pope called the 1915 incidents a 'genocide,' which lacks any competent court judgment, while describing the events that took place in Bosnia and Rwanda as 'mass killings,' which are recognized as genocides by competent international courts. There is a contradiction and discrimination there."

Parliamentary Speaker Cemil Çiçek accused the pope of slander and discrimination. Recalling that the Armenian diaspora has ramped up efforts to put across the incidents as genocide, he said that the pope's position requires him to be impartial.

EU Minister Volkan Bozkır also expressed anger over the pope's remarks, saying: "I reject the papal attitude, which should strive to leave a legacy of peace and friendship for future generations, but instead tries to derive enmity out of history."

The head for the Presidency of Religious Affairs, Mehmet Görmez, said it is sad to see lobbies and public relations companies "extending to prayers and Masses."

"I feel sorry to see that a respectful man of God has delivered such remarks against the Turkish nation after being influenced by political lobbies, and that he is expressing them through prayer and a Mass." If societies begin questioning the pains they caused each other, the Vatican will be most harmed out of it," Görmez said.

The Ottoman Empire forcibly relocated Armenians to eastern Anatolia following revolts and there were Armenian casualties during the relocation process. Turkish-Armenian relations have remained strained for decades due to Armenia's constant demand for Turkey, as well as other countries, to officially accept the mass, forced deportations of Armenians to Anatolia during World War I as genocide. The official Turkish government stance on the claims of genocide is that it acknowledges that a tragedy occurred with great suffering on the part of the Armenians, but that Muslim Turks also suffered during the event. They have repeatedly called on Armenia to check unbiased historical sources to bring the matter to light.
Last Update: Apr 16, 2015 10:24 am
RELATED TOPICS