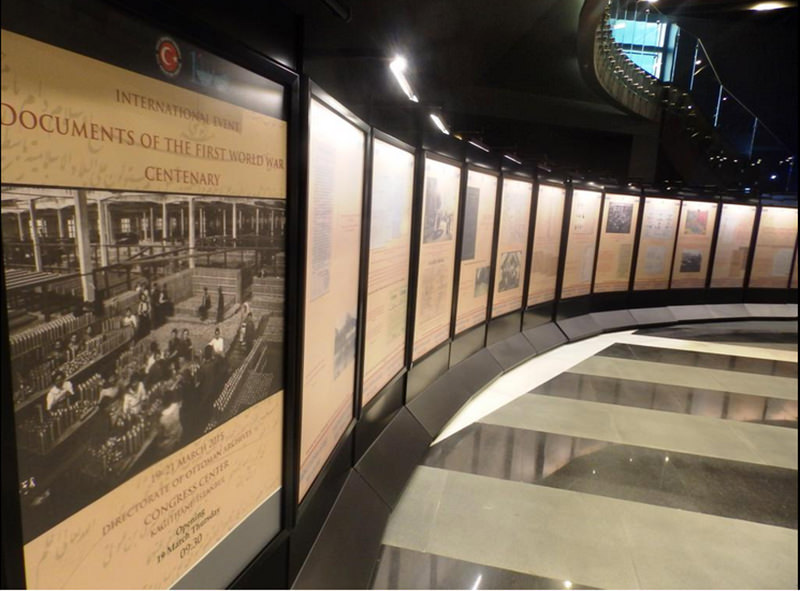 The Armenian diaspora pressures the world to label the 1915 events as genocide for political purposes, but fails to expose a genuine will to uncover the historical facts regarding the incidents as they have shut access to their archives. Historians are explaining this as evidence of Armenians' reluctance to abandon the excuse for a campaign against Turkey

The Armenian diaspora has increased its efforts to portray the 1915 incidents from its own perspective and becoming relatively successful in influencing public opinion as of late. Pope Francis during a Sunday mass to commemorate the Armenian lives lost in the 1915 incidents, labeled the events as "genocide," prompting a harsh response from Turkish officials. Following his remarks, the European Parliament adopted a resolution urging EU members and Turkey to recognize the incidents as "genocide," adding fuel to the debates. Turkish officials dismissed the decision as having political purpose. The Turkish Parliament released a statement rejecting the resolution. However, the diaspora falls short in terms of shedding light on events, as they continue to refuse to allow historians to dig for the truth. The repeated calls of Turkish officials to check unbiased historical sources and commence discussions to reveal whether the killings of the Armenians during 1915 were the outcome of genocidal intentions on the part of the Ottoman government, have been declined by the community at every turn.

Historians suggest that the "truth" will cripple their gains achieved thus far by politicizing the events. According to some scholars, this explains why the Armenians are refraining from revealing what "really" happened 100 years ago, incidents that "do not amount to genocide."

"I repeatedly asked to work in the archives of the Armenian Revolutionary Federation in Watertown, close to Boston. They did not answer. It was last year. I also asked to work in the Boghos-Nubar library archives in Paris, but the first time in 2012, the curator answered that he would be out of Paris during my visit, and the second time in 2013, he did not answer my emails. Armenian historians themselves admit that the archives of the Armenian patriarchate in Jerusalem are not open," said renowned French historian Maxime Gauin. He believes Armenians have something to hide, pointing to the case of Yektan Türkyılmaz, who was prevented from working in the National Archives of Armenia and arrested and expelled in 2005 for allegedly being a researcher who does not support the official position of Yerevan.

In contrast, Gauin said, there is no similar problem with the Turkish archives: "Researchers who support the 'Armenian genocide' label have been allowed to work here since 1991, and the conditions of work only improved during the last 15 years. Indeed, the last Ecevit cabinet and the AK Party government did a lot to ameliorate access to the Turkish archives." Turkey also previously proposed to form a joint commission of scholars to study the 1915 incidents in detail in order to adopt a full perspective, a proposal that was also rejected by the Armenian government.

When asked whether the Pope's remarks or the EP's resolution that brand the events as genocide were politically motivated, Gauin said: "Of course. I am afraid that the current pope is trying to support the idea of a 'Western Christian world' assaulted by 'evil Islam.' In the European Parliament, the Armenian issue is frequently activated to express bitterness against Turkey."

The discord between Armenians and Turks stems from disagreement over how to label the incidents. Armenia says 1.5 million people were deliberately killed, and Turkey says the deaths were a result of deportations and civil strife. Historians agree that there are certain qualifications necessary for actions to be deemed genocide. Genocide is a legal term that defines actions that intentionally aim to destroy a certain group based on their nationality, ethnicity, race or religion. Turkey acknowledges that the Ottoman Empire forcibly relocated Armenians to eastern Anatolia following revolts, and there were Armenian casualties during the relocation process, but it denies claims of genocide, which is the highest crime of humanity, given the incidents do not fit the official definition of "genocide."

Gauin shared his findings of what happened 100 years ago with Daily Sabah. He briefly explained the chaotic setting of the incidents that gave the Ottoman Empire no choice but to either willingly or forcibly deport Armenians in eastern Anatolia – not being able to handle the matter by any other conventional means.

"The Ottoman government faced insurrectional activities in eastern Anatolia, threatening the vital roads used by the Ottoman forces that fought the Russian army and also insurrections in southern Anatolia, aimed to facilitate an Anglo-French landing from Cyprus to Iskenderun. It was not possible to send large units to defeat the groups of insurgents one by one because most of the Ottoman army was fighting on the frontline. The only remaining solution was the one practiced since the 18th century and even theorized around 1900, by the Spanish (Cuba), American (Philippines) and British armies (South Africa). Insurgents cannot survive without the support of a civilian population; if you cannot suppress an insurrection using conventional means, let's displace the civilians who (willingly or by force) help the insurgents," said Gauin, adding that the "killings" were never systematic, the perpetrators did not act in coordination, and these crimes were not one-sided. Gauin cited two U.S. official investigators: Emory H. Niles and Arthur E. Sutherland who concluded in 1919 that there was no difference between the crimes perpetrated by Armenians against Turks and the ones by Turks against Armenians, and in fact the Armenians destroyed more buildings.

The prominent British historian Norman Stone, in response to a statement released by Abraham H. Foxman, National Director of the Anti-Defamation League (ADL) in 2007, which said the events were "tantamount to" genocide, penned a letter to the director the same year. He noted in his letter how some number of scholars that came up with findings that there was a "tremendous Armenian-nationalist provocation" faced attacks, and attempts to stop publication.

"Vociferous Armenian diaspora historians like to claim that 'historians' support them, but this is just not true. Quite the contrary: On the whole, people who know the subject first-hand do not accept the thesis of 'genocide'," the letter further read. Stone also claims the documents allegedly proving the genocide are forgeries. His findings revealed in the letter further suggest that the Ottomans themselves tried some 1,300 men in 1916 for offenses they perpetrated during the deportation of the Armenians in 1915 and executed a governor. He also claimed the Armenian populations of Istanbul, Izmir and Aleppo were not affected by the deportation order, which cements the idea that the target was not the entire community.

Guenter Lewyn, a prominent scholar and an author, in his book, "The Armenian Massacres in Ottoman Turkey, A Disputed Genocide," which focuses on the events based on historical sources, said the "killings" could not be called "genocide." The definition, he suggests requires an intention of annihilation, which is not the case in the 1915 incidents.
Last Update: Apr 18, 2015 5:51 pm
RELATED TOPICS