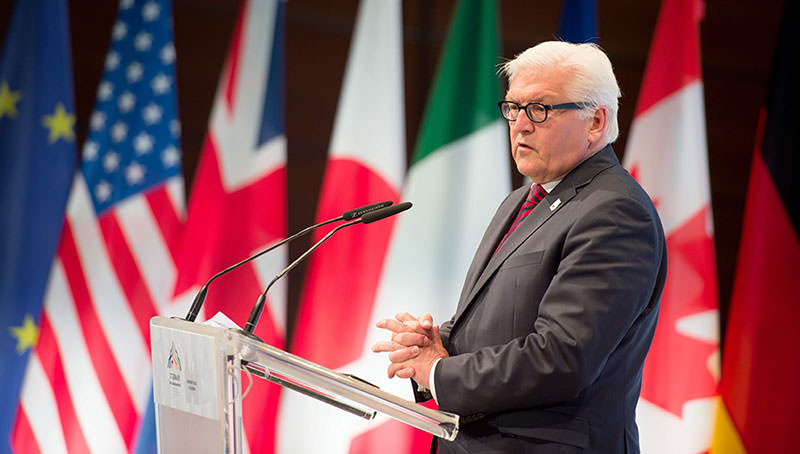 German Foreign Minister Frank-Walter Steinmeier speaks during a news conference following the meeting of G7 Foreign Ministers in Luebeck, Germany, on 15 April 2015 (EPA Photo)
by daily sabah Apr 21, 2015 12:00 am
The foreign ministry of Germany, the Federal Foreign Office, has released an interview that the foreign minister Steinmeier conducted with German daily Süddeutsche Zeitung on Sunday, in which he urged for a constructive approach to the 1915 incidents regarding Armenians.

The Minister Steinmeier said in his statement, "It is possible to want to call what happened genocide, and I can well understand the reasons why and even more so the feelings which provoke it. That is understandable and also important. However, we have to realise that it is not enough."

Steinmeir has previously said, during his visit to the Estonian capital Tallinn, that "Past atrocities cannot be reduced to a single word or to the dispute over a word," avoiding the use of simple labels to describe the events.

The Minister urged for a reconciliation between Armenia and Turkey in his statement. He emphasized the importance of a "sincere and earnest dialogue" between two nations about what happened in 1915, with the hope that dialogue would lead to "better neighbourly relations".

He said, "My concern is that an ever more charged political debate in Ankara and Yerevan, as well as here in Berlin, will not lead to what is truly important and to what I always hope for but, rather, will make that more difficult or even impossible: an end to the silence, an end to talking about one another and the start of a sincere and earnest dialogue between Turks and Armenians about what happened back then, what it means for the present and how remembering the terrors of the past can one day translate into better neighbourly relations."