US Secretary of State Kerry: Turkey is an essential partner of US in fighting ISIS 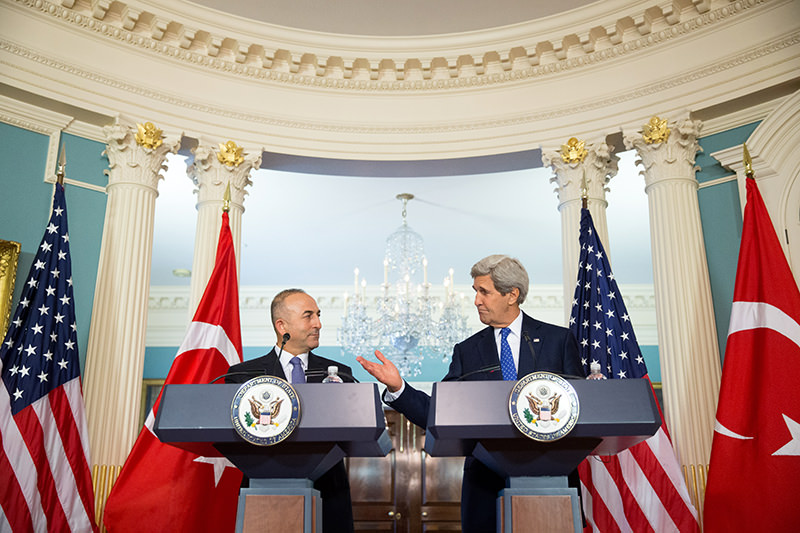 | AP Photo
by Compiled from Wire Services Apr 22, 2015 12:00 am
U.S. Secretary of State John Kerry has underlined that Turkey is an essential partner of the U.S. in the fight against ISIS and praised Turkey's contributions. Kerry met with his Turkish counterpart Mevlüt in Washington to discuss wide-ranging efforts to combat a slew of upheavals in the Middle East.

The United States and Turkey in March began training and equipping thousands of moderate Syrian rebel forces as part of a deal signed after several months of negotiations.

ISIS forces "are under increasing strain, its leadership has been degraded, its finances have been squeezed and its hateful ideology has been discredited."

But the top US diplomat warned that as ISIS had weakened, it had "become more dependent on new recruits."

Many recruits have come from Gulf nations, but there has been alarm at the increasing numbers joining ISIS from Europe.

That meant countries had to redouble efforts to "persuade and prevent young people from making the fatal mistake of signing and then travelling to and trying to cross the border into Syria," Kerry said.

Meanwhile, Turkey appealed for more help Tuesday in cracking down on foreign fighters flooding to join militant ranks in Iraq and Syria, revealing it had placed 12,800 people on a no-entry list.

Turkish Foreign Minister Mevlüt Çavuşoğlu revealed that Turkey had placed more than 12,800 people on a list barring them entry to the country amid fears they could try to slip into either Iraq or Syria.

A further 1,300 foreign fighters had been deported, he said.

"Turkey is one of the transit countries for foreign fighters, and we have been doing our best to stop them," Çavuşoğlu said.

"But the source countries should also do their best to support and to stop foreign fighters before they leave," he argued.

"We need better cooperation; we need timely information sharing and also intelligence." Kerry also revealed that he planned to attend a meeting of NATO foreign ministers being hosted by Turkey and to be held in Antalya from May 13-14.

Çavuşoğlu also hailed US-Turkish relations on Tuesday amid tumult in the Middle East and Eastern Europe.

"Turkish-American strategic relations are more indispensable today than ever," he said.

"We are at a critical time for our region," he said. "Turkey and the United States are the two countries with important comparative advantages. This is what makes our partnership unique and valuable. In the past we have proven that by working together on any common vision, the two countries can overcome any challenges."

Among the issues that the top diplomats will address during the meeting are the ongoing nuclear negotiations with Iran, Yemen, Syria, Iraq, ISIS, and the conflicts in Ukraine and Cyprus.

"I want to emphasize this afternoon the importance of the ties between the United States and Turkey, particularly the security relationship at this particular moment," Secretary of State John Kerry said, noting Ankara's role in Afghanistan, patrols in the Black Sea and contributions in Iraq.
He hailed Turkey's hosting of roughly two million refugees of the Syrian conflict, saying that doing so is "creating a huge economic burden, and a social burden."

As the allies continue to work together to end the transit of foreign fighters seeking to join ISIS and other extremist groups in Syria and Iraq, Çavuşoğlu said that cooperation between Washington and Ankara is "excellent."

Regarding the Cyprus issue, Çavuşoğlu said, "We want to reach a lasting solution in Cyprus in this year."

"Turkey and Turkish Cypriots have the political will for a solution, and we are waiting at the negotiating table," said Çavuşoğlu. "Here the United States' active role is very important," he added.

According to a statement by the National Security Council spokeswoman Bernadette Meehan the two leaders discussed a range of issues including cooperation against ISIS, the flow of foreign fighters and the train- and-equip program for vetted members of the moderate Syrian opposition.

"Ambassador Rice encouraged the minister to take concrete steps to improve relations with Armenia and to facilitate an open and frank dialogue in Turkey about the events in 1915," Maheen said.