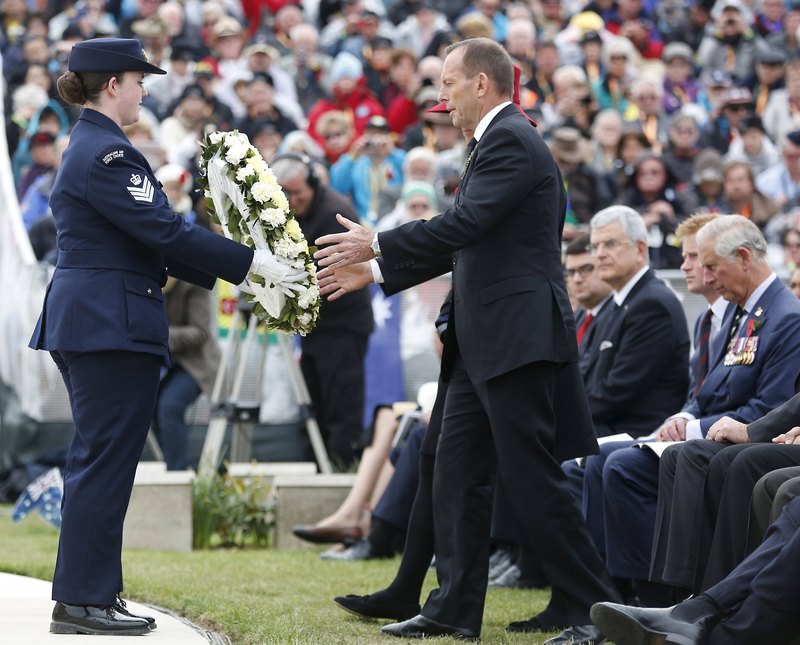 Australian Prime Minister Tony Abbott u00a9 prepares to lay a wreath at the Lone Pine memorial alongside Britain's Prince Charles u00ae and Prince Harry (2nd R) in Gallipoli, Turkey, April 25, 2015 (Reuters Photo)
by Anadolu Agency Apr 25, 2015 12:00 am
The prime ministers of Australia and New Zealand on Saturday visited two of the Gallipoli battlefields where their countries' men fought and died.

Australian Prime Minister Tony Abbott spoke at a ceremony at Lone Pine ceremony, where Australian troops mounted a diversionary attack on the Ottoman trenches in August 1915.

"Our nation is not just a place on a map, or a massive people who happened to live somewhere," Abbott said. "Our nation is shaped by our collective memory by the compact between the dead, the living, and the yet to be born."

He added: "We do not come here merely to lament, we came here to show respect because their stories have become our stories."

Recalling the horrors of the battle and the living conditions for the soldiers, Abbott said that around 800 Australians lost their lives, and another 15,000 were wounded, over a four-day period, many succumbing to disease as well as bullets and shells.

"So here, at Lone Pine, we remember those men called upon to do things in their countries' name that took them to the very edge of their physical and emotional limits and beyond," he told the crowd.

The centenary commemorations of the campaign, known as the Battle of Canakkale in Turkey, mark the deaths of more than 130,000 troops from Turkey, Britain, Ireland, France, Australia, New Zealand, India and Newfoundland on Anzac Day.

The soldiers of the Australian and New Zealand Army Corps accounted around 11,000 of the dead in a campaign that was designed to knock Turkey out of World War I by clearing the Dardanelles Strait for Allied warships to threaten Istanbul.

"So much loss for what seems so little," Abbott said. "Yet it was not for nothing, it was for the country, empire, king and the ideal that people and countries should be free."

Remembering everyone "who served on this peninsula" Abbott said the day was to honor "the brave, the scared and the confused, as well as the good in the bad, the greatness and the smallness of it all."

He thanked Turkey "for accepting our sons with theirs" and said the care shown to the resting place of so many Australians demonstrated "the foe that is now a friend."

New Zealand Prime Minister John Key addressed a service at Chunuk Bair ceremony, located on a hill that, in August 1915, was one of the Allied forces' main objectives and where many New Zealanders lost their lives.

"There are places on this peninsula whose names will not be forgotten," he said. "For New Zealanders, nowhere in Gallipoli is more special than here."

Describing today's New Zealanders as "the descendants of countrymen who fought and died on that hill," Key added: "We did not come here merely as successors, we came to feel close to those who came before us a hundred years ago?

"The sacrifice of many men from a small country of New Zealand was great. There is no more we can give them now than our respect."

Britain's Prince Harry, shortly due to finish his own service in the British army, recalled "the desperation of the fighting that took place here" in a speech at Lone Pine.

"While we honor their bravery, we must also remember the emotional cost, the guilt, the sorrow and the mental anguish of those who survived."

After reading out a letter from an Allied soldier who fought at Gallipoli, he went on: "It is this love, the memory of these lives lost, that draws us back here now, a century later, to stand again amongst their graves and to remember their loss and all they gave for us and for each other."
Last Update: Apr 25, 2015 4:59 pm
RELATED TOPICS