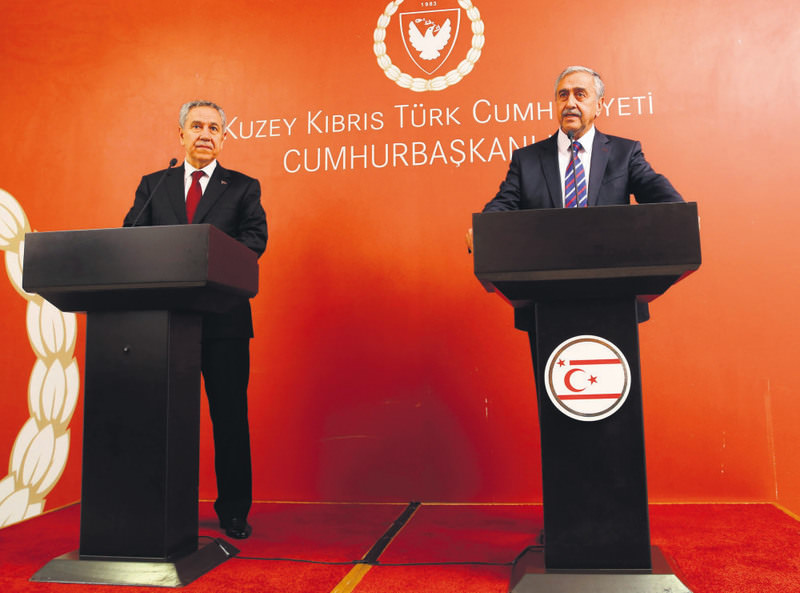 After soothing a spat with Ankara, newly elected Turkish Cypriot President Akıncı said he is determined to work with Turkey. With the presence of officials from Ankara, Akıncı was sworn in as new president of Turkish Cyprus

The new president of Turkish Cyprus said on Thursday that he is determined to work with Turkish authorities on the Cyprus issue.

Mustafa Akıncı was sworn in on Thursday as the fourth president of Turkish Cyprus. "A self-sufficient Turkish Cyprus with the ability to govern itself will be able to find its place as a federal structure in international law and EU institutions," Akıncı said. He added that such a development would benefit both Turkish Cypriots and Turkey.

The Cyprus issue has remained on the agenda between the Greek and the Turkish parts of the island since a Greek Cypriot coup was followed by a Turkish peace mission to aid Turkish Cypriots in the north in 1974.

After the inauguration, Akıncı met Deputy Prime Minister Bülent Arınç. They played down an earlier spat between Akıncı and President Recep Tayyip Erdoğan after the newly-elected leader said his government wanted "brotherly" ties with Ankara, rather than the traditional "motherland and child" relationship.

The remarks prompted a strong response from Erdoğan who told Akıncı that he "has to watch his words." On Thursday, Arınç said the motherland metaphor was meant to emphasize a relationship of love and sincerity. Arınç said: "We have only one concern: it is to achieve an economically strong Turkish Cyprus that stands on its feet with peace, happiness, stability and prosperity."

Akıncı responded by saying he would work closely with the Turkish government and that he recognized that he had a responsibility to observe and enhance the ties between Ankara and Nicosia. Having won the runoff presidential election last Sunday with 60.38 percent of the vote, Akıncı replaced Derviş Eroğlu, who received 39.62 percent of the vote. Arınç, Undersecretary of the Foreign Ministry Feridun Sinirlioğlu, Turkish ambassador to Nicosia Halil Ibrahim Akça, as well as a number of ministers, deputies, military officials and civilians were present at the inauguration that took place at parliament.

Greek Cypriot President Nicos Anastasiades was scheduled to meet Akıncı on Saturday in an effort to kick-start the stalled peace talks. Greek Cypriot government spokesman Nikos Christodoulides said the two presidents would meet at lunchtime and are expected to discuss confidence-building measures and the resumption of negotiations.

The meeting was agreed to during a telephone conversation the two leaders had on Tuesday, Christodoulides said. On Monday, Anastasiades hailed the election of Akıncı, saying it provided hope that a peace deal could soon be reached.

U.N. Special Adviser to Cyprus Espen Barth Eide is scheduled to arrive on Cyprus within the week and is widely expected to announce a date for the resumption of peace talks.

The ongoing dispute on the island started in the 1960s when a Treaty of Guarantee was signed between Turkish and Greek Cypriots over the island along with the British government. The treaty stipulated that Cyprus would not participate in any political or economic union with other states, but three years later, Turkish Cypriots were ousted by force from all bodies of the new republic by Greek Cypriots. Later, Greek Cyprus claimed to be the representative of the island calling itself the Republic of Cyprus, which is solely not recognized by Turkey. All efforts by the international community to end the dispute between 1964 and 1974 failed. When the Greek side tried to annex the island in a coup in 1974, a Turkish peace mission was launched in accordance with the 1960 treaty to prevent it from happening. Cypriots went to the polls in 2004 to vote on the Annan Plan for Cyprus, which was a U.N. proposal to resolve the dispute by restructuring the island as a United Republic of Cyprus. It proposed a federation of the two states that aimed to unify the Turkish and Greek Cypriot communities. The proposal was revised five times before it was put to a referendum in April 2004 and was supported by 65 percent of Turkish Cypriots and 24 percent of Greek Cypriots.
Last Update: May 02, 2015 6:25 pm
RELATED TOPICS