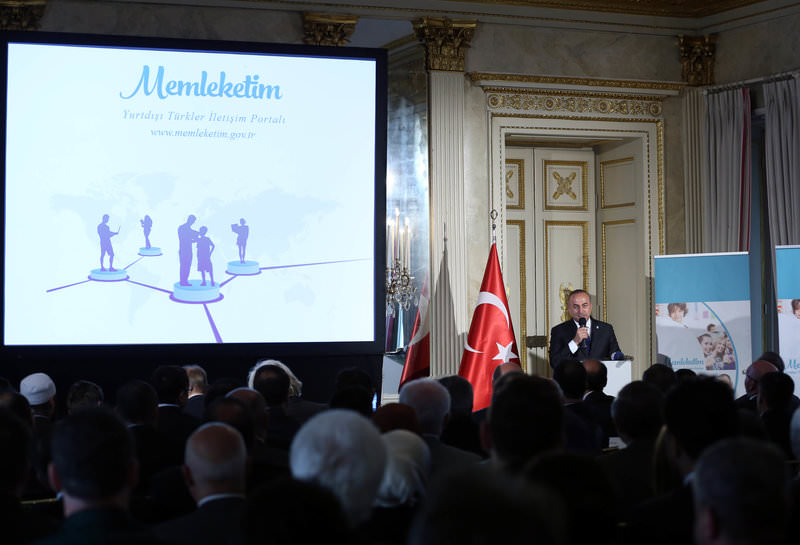 by Daily Sabah May 07, 2015 12:00 am
The Foreign Ministry launched a new communication portal called "Memleketim" (My Country) that aims to establish stronger communication ties with the Turks living abroad and also aims to build a bridge between Turkey and Turks overseas.

There are approximately 6 million Turks living abroad, mostly in Western countries, and the Memleketim project has been developed to be a bridge between them and Turkey in efforts to establish a strong communication network with Turks living abroad and their relatives.

Speaking at the inauguration ceremony in Munich, Foreign Minister Mevlüt Çavuşoğlu said the ministry aims to expand the Youth Bridge project through the Memleketim portal, and added "We [the ministry] plan to take 1,000 Turkish youth living abroad to Turkey to the youth camps. The Youth and Sports Ministry is also one our partners in the project." Continuing his statements, Çavuşoğlu said: "We will be providing 24-hour counseling service to our nationals regarding family matters under Family Consulting Services. The Family and Social Services Ministry will be launching attaché offices in six locations in Europe."

Through the project, Turkish communities in the world will able to benefit from a number of opportunities from the Memleketim communication portal. The special communication network of the portal Postman provides online shopping from Turkish Grocery Store and an option for distance learning through the e-School option. In addition, the Memleketim network will provide camping at youth camps through the Youth Bridge to citizens living abroad and aims to provide service to Turkish citizens of all ages residing outside of Turkey. The web portal is accessible via www.memleketim.gov.tr

Commenting on the upcoming elections, Çavuşoğlu called on all Turkish citizens living abroad to vote.

The Supreme Election Board announced earlier that 112 polling stations would be opened in 54 countries to serve the almost 3 million Turkish nationals living abroad and Turkish citizens living in several European countries will start casting their votes on Friday ahead of the June 7 general elections.

Turkish citizens living in Germany, Australia, Austria, Belgium, Denmark, France, Switzerland and Turkish Cyprus will be eligible to vote from May 8-31. Polling stations for Turkish citizens living outside the country who will cast their votes at border-crossing points will be open until June 7.
Last Update: May 07, 2015 11:58 pm
RELATED TOPICS