US Spokesperson Marie Harf to visit Turkey at last, delighting her expectant fans 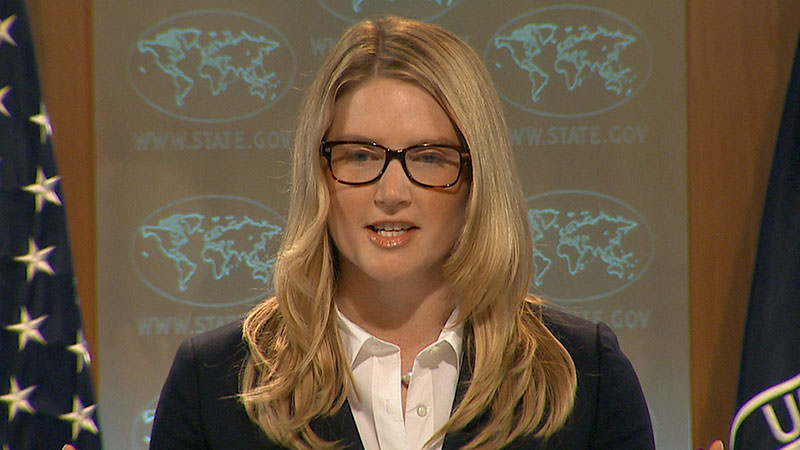 by Didem Atakan May 12, 2015 12:00 am
Marie Harf, who Turks see as a media icon following her headline-grabbing comments about almost every Turkey-related news, will light up her Turkish fans' moods with her visit to Turkey's southern province of Antalya on Wednesday.

Spokesperson Harf will pay a visit with the U.S. convoy accompanying Secretary of State, John Kerry, who will join a meeting of NATO Foreign Ministers on Wednesday. But it will be a short trip – the convoy will return to Washington to join Barack Obama's dinner with Gulf Cooperation Council leaders that evening. The shortness of her visit will upset Harf's Turkish fans, who feel close to Harf despite never having met her .

Thirty-three year-old Harf has faced random questions from her Turkish fans on Twitter, some of whom have invited her for a "coffee" (to which she didn't reply), or others have compared to her "a family member." The relationship between Harf and Turkish fans certainly seems to go beyond the usual diplomacy between two parties.

Harf is the official spokesperson of the U.S. on any foreign-related matter, but Turks' affection for her seems to subside her diplomatic stance. Even the mayor of the Turkish capital Ankara, Melih Gökçek, recently addressed her as "Come on blonde, answer now!" to his 2.58 millions fans on Twitter, to criticize what he saw as the double standards of the U.S. government and international media outlets in the wake of Baltimore riots.

Asked in a press meeting on Monday if the mayor's remarks would be on her agenda during her visit to Turkey, Harf replied: ""I doubt it, honestly. We're going to meet with our NATO allies. I don't think that the mayor of Ankara is part of that discussion. It's really at a different level."

Any other U.S. spokesperson commenting on "different levels" would have drawn different reactions in Turkish politics or public, but many people smiled at Harf's comments and were enthusiastic about seeing how the polemics between the two parties would progress.