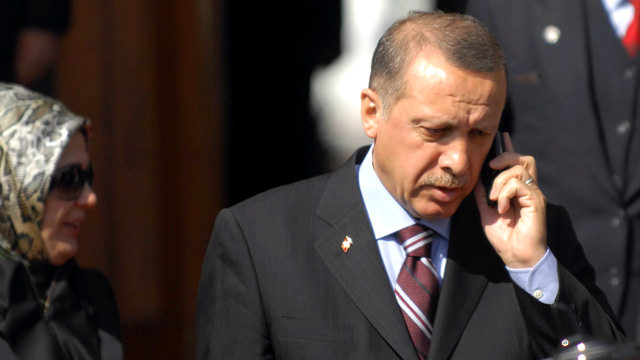 by Daily Sabah with AA May 20, 2015 12:00 am
Turkish President Recep Tayyip Erdoğan on Tuesday phoned the leader of Crimean Tatars, Mustafa Dzhemilev, over the 71st anniversary of the mass deportation of Crimean Tatars in 1944.

"Turkey is in solidarity with their Crimean Tatar brothers in these days of mourning," the Turkish Presidency quoted Erdoğan as saying.

Erdoğan said the exile the Crimean Tatars suffered was a "dark page" in history, adding that the "inhumane" incident would never be forgotten.

The president conveyed his condolences to all victims of the exile.

"Turkey gives priority to the peace, welfare and security of Crimean Tatars from the beginning of the Ukrainian issue," said Erdoğan, referring to the annexation of Crimea by Russia last year in March.

Erdoğan also criticized Russian authorities over banning Crimean Tatars from holding a commemorative ceremony over the anniversary of the exile, calling it "unacceptable".

Dzhemilev, for his part, thanked the president for Turkey's sensitivity and support for Crimean Tatars.

Around 250,000 Crimean Tatars were taken from their homes and forced to migrate thousands of kilometers away to Central Asia under Soviet leader Joseph Stalin in 1944.
RELATED TOPICS