Turkish President Erdoğan: Morsi is the president of Egypt, not Sissi 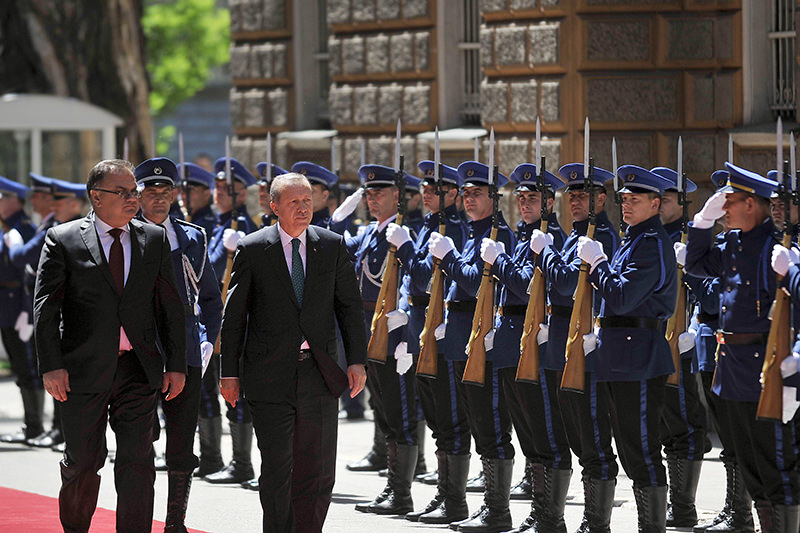 Turkish President Recep Tayyip Erdou011fan (2nd L) walks with Chairman of Bosnia and Herzegovina's tripartite Presidency, Mladen Ivanic (L), during a welcoming ceremony in Sarajevo on May 20, 2015 (AFP Photo)
by Nurbanu Kızıl May 20, 2015 12:00 am
President Erdoğan has stated that he recognizes Mohammed Morsi as the president of Egypt, rather than el-Sissi.

Speaking at a joint press conference with Mladen Ivanic, the chairman of the presidency in Bosnia and Herzegovina, Erdoğan stated that he did not approve of the coup in Egypt since the beginning.

"It was obvious that this would happen" Erdoğan said, criticizing the international community for remaining silent to the overthrow of the democratically elected government in Egypt. He stated that as a leader "who believes in democracy," he does not consider Abdel Fattah el-Sissi to be the president of Egypt.

"I did not sit on the same table with him at the United Nations. I would have contradicted myself if I did" the Turkish president said, adding that he could not claim to be a democrat if he did not express his stance regarding the matter.

President Erdoğan also touched upon the investments made by Turkey in Bosnia and Herzegovina and stated that the Turkish Cooperation and Coordination Agency (TİKA) continues to carry out over 700 projects here.

Recently, Norbert Lammert who is the speaker of the German Parliament stated that he has cancelled a planned meeting with Egyptian President Abdel Fattah el-Sissi during his planned visit to Berlin next month, due to human rights violations in Egypt.

Relations between Turkey and Egypt have deteriorated since July 2013, when Egyptian General el-Sissi carried out a coup to topple Mohammed Morsi, the country's first democratically elected president.