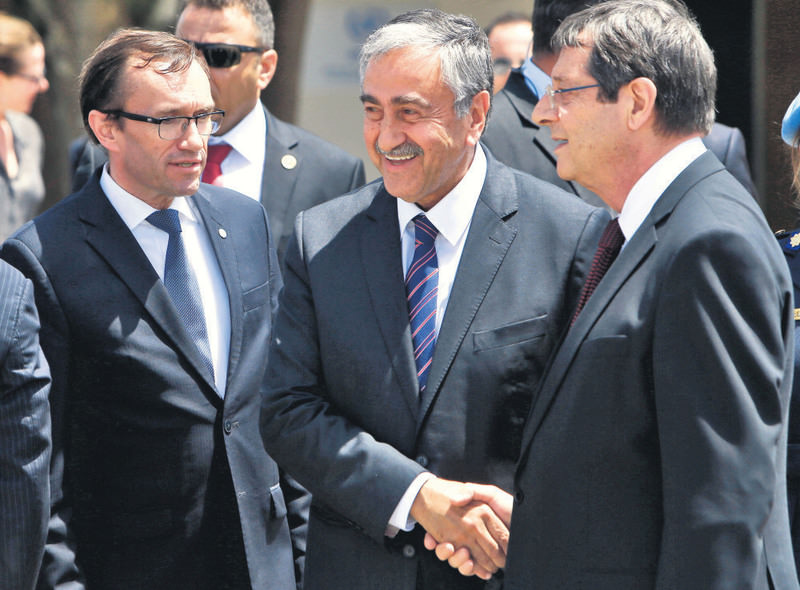 In the second meeting of the latest round of peace talks, the Cypriot leaders agreed to launch several initiatives, including opening border gates and integrating GSM networks, as part of efforts to build confidence

In efforts to bring about a permanent solution on the long-divided island, Turkish Cypriot President Mustafa Akıncı (center) and Greek Cypriot President Nicos Anastasiades (right) met on Thursday along with U.N. Special Representative in Cyprus Lisa Buttenheim and U.N. Special Adviser for Cyprus Espen Barth Eide (left). During the four-hour meeting, the first observations from the beginning of the meeting indicated a sincere environment, with five critical steps being agreed to in the quest for a permanent solution. Underlining the productivity of the reunification talks, Eide tweeted on his personal Twitter account yesterday that Turkish Cypriot Minister of Foreign Affairs Özdil Nami and Greek Cypriot negotiator, Andreas Mavroyiannis, have presented their joint work to the Turkish and Greek Cypriot leaders. Following the meeting, Akıncı and Anastasiades announced the start of five critical agreements as confidence-building measures that are necessary initiatives to work toward the opening of the Aplıç and Deryneia border gates, which are significant for both Greek and Turkish Cypriots. Akıncı, assessing the meeting with Anastasiades, told the media that committees will be established in regards to opening additional border gates.

During the first meeting, Akıncı announced that people crossing any of the seven north-south checkpoints along the U.N.-controlled buffer zone will no longer need to fill out a form, speeding up the process.

The integration of GSM communication networks between Greek and Turkish Cyprus, which have long been awaited by both sides, was agreed to in the second round of reunification talks. Speaking to the media, Akıncı said that the integration of communication networks will benefit all people on Cyprus, and that another committee responsible for the process of establishing such integration has been assigned. In addition to resolving the technical issues regarding integration of GSM networks, Akıncı also announced that interference of radio and TV frequencies will also be resolved with initiatives from both sides. Joining the electricity grids was announced as another critical agreement made in the second round of talks.

As Eide praised both Akıncı and Anastasiades for recognizing the "paramount importance of gender perspectives for a Cyprus settlement," both leaders announced on Wednesday that a Social Committee of Gender Equality will be established. Akıncı emphasized the significance of women living on the island, saying that females make up more than half the population on both sides of the island. In this regard, increasing women's role in the reunification talks and providing awareness within the future federal establishment was announced as part of the gender equality agreement. An additional Culture Committee has been established as Akıncı announced on Wednesday, including Yaşar Ersoy, Zehra Şonya, Kani Kanol and Ruzen Atakan, Ümit İnatçi as well as Musa Kayra and Emin Çizenel, Mehmet Kansu and Yıltan Taşçı.

The two presidents are to meet four more times in June, but the dates are yet to be announced. Speaking exclusively to Daily Sabah, Nami discussed the progress of the peace talks. While he said that it is important to have hopeful and positive expectations for the talks, he also stressed that it is highly important to continue the process cautiously. "It is important be cautious throughout the talks. We do not want to be disappointed if the talks turn out to be 'visa-versa,' as it is a rough process," he said. Bringing up Anastasiades' stance during the negotiations at the time of former President Derviş Eroğlu, Nami said that the current stance is positive. Nami warned that everyone must be ready to hear that tensions have risen during the meetings, even though good news is currently being announced.
Last Update: May 29, 2015 7:27 am
RELATED TOPICS