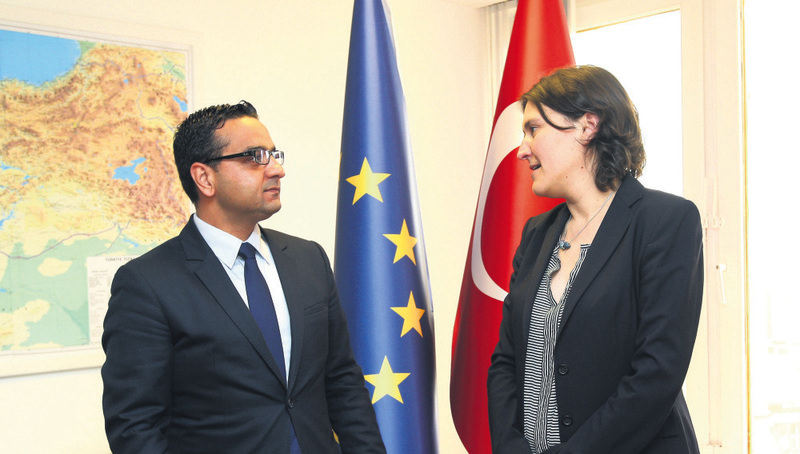 by Ali Ünal May 28, 2015 12:00 am
European Parliament (EP) Rapporteur for Turkey Kati Piri said she wanted Turkey's progress report for EU membership to be as inclusive as possible. Speaking to Daily Sabah on Wednesday in Ankara during her visit to Turkey after the EP postponed a planned vote on approving a report, Piri said that there was a lack of time for the political groups in the EP to discuss it that it was her decision to postpone the vote. "My role as rapporteur is to represent the majority of the EP. After I presented my report in January, I spent four months with the representatives of the other political groups arriving at a common position before we put it to a vote in the Foreign Affairs Committee. The vote was widely adopted – there were only five votes against, 47 in favor. There was a clear position there. It took only one week for the pioneering debate when all 751 members voted on it," she said.

"And it presents another opportunity for members and groups to make amendments. Thirteen members were handed in and, actually, there was not enough time to talk with the other political groups to come again to a common understanding before the vote," she said.

Commenting on Turkey's ongoing fight against the Gülen Movement, which allegedly infiltrated state institutions including the judiciary and police to undermine the government and is officially defined as a national threat by the National Security Council (MGK), Piri stressed that it is an internal issue for Turkey and not related to the Turkey-EU accession process. "I am not looking into whether there is or is not a 'parallel structure.' These are really internal Turkish issues that are not related to the Turkey-EU accession process. We have clear standards by which we try to assess the progress Turkey is making. The standards are well described in the negotiation chapters. I know, and of course I follow, the news in Turkey. It is not that I am ignorant about the debate here. But as a rapporteur, I really don't have an opinion on it, nor does the EP as such," she explained.

Pointing out that she, as the rapporteur, is always a supporter of opening Chapter 22 and Chapter 23 in the negotiation process between Turkey and the EU, Piri stressed the importance of being constructive in the accession process. She said: "I believe that there is a clear willingness from the Turkish government, which has said that it wants to get these opening benchmarks and open these chapters. There is some concern from the EP on these issues. The logical step would be to open these chapters. This is the call from the European Commission."

Concerning the Cyprus issue as a block to Turkey's EU bid, she praised the newly elected Turkish Cypriot president for his agenda of wanting to come to a settlement and said: "I very much hope that on this issue on Cyprus, this decade-long division of the island, positive steps can be taken here, and I think there is a good window of opportunity. It will also in the end help Turkey's EU accession process."

Piri praised the efforts and steps in the Kurdish reconciliation process that have been taken by the government. "I think the government took a very brave and good step that is very important for the further democratization of this country, and I think it took a lot of courage and efforts to put it into motion,'' she said. Noting that there is only 10 days left until the general elections, Piri said that contradictory statements both from the government and the Kurdish side would be understandable during an election period. "I understand that during an election you don't want to show your closeness, you want to show the extreme positions. That is what happens in every country," she added.

Stressing that her visit is not related to the upcoming general elections, Piri said that as an EP rapporteur, she wants to establish the tradition of the rapporteur visiting Turkey after EP reports on Turkey. "I also owe it to the Turkish public, to Turkish government representatives and the opposition, but also in general to civil society organizations to explain what is in the report and if there are any questions to answer. I think it is a fair tradition that I want to set," she said. During her stay, Piri will visit Ankara, Diyarbakır, İzmir and Istanbul.

Turkey's progress report in it EU membership bid will be voted on at a general session of the EP in Strasbourg on June 9-11.
Last Update: May 28, 2015 10:34 pm
RELATED TOPICS