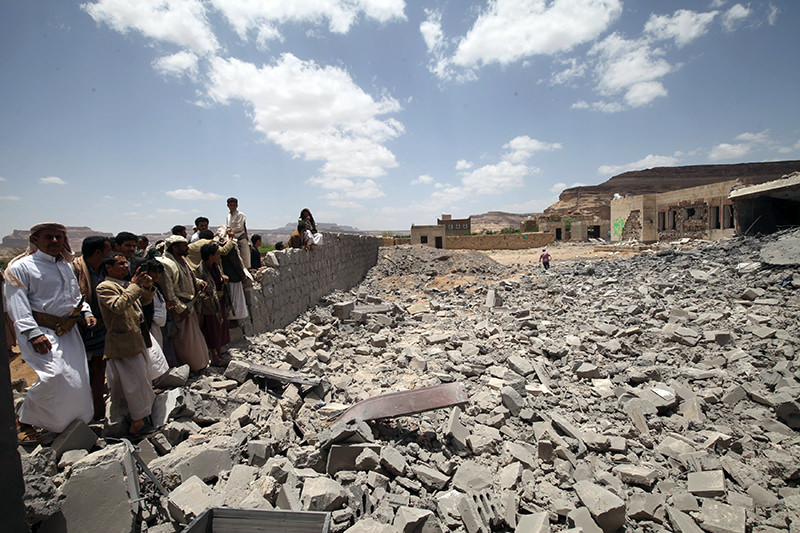 People look on, near the site of a building destroyed by a Saudi-led air strike near Sanaa, May 30, 2015 (Reuters Photo)
by Anadolu Agency Jun 03, 2015 12:00 am
Turkey's Foreign Ministry denied on Tuesday night claims that it has intelligence personnel working on behalf of Saudi Arabia in Yemen.

In a statement, spokesman Tanju Bilgiç said the claims by Iran's Fars news agency had "no connection with the reality."

He added: "It is considered as a provocative move by some circles who are disturbed by Turkey's principled stance regarding the backing of solving issues in Yemen with political dialogue, security and stability."

Fars story claimed that rebel Shia fighters known as Houthi or Ansarullah had captured "several agents" of Turkey and Qatar. The report alleged the rebels had arrested eight "operatives of the Turkish and Qatari spy agencies", citing rebel sources. Attributing the claim to rebel leader Razzaq Hamid al-Amjadi, the agency added: "The agents, who also received backing from the Saudi spy agency, planned to conduct terrorist attacks in Sanaa and bomb the Yemeni foreign ministry".

In September, Houthi forces overran Sanaa and have since extended their control to other parts of the country.

Saudi Arabia and its allies began a bombing campaign in March in support of President Abd Rabbuh Mansour Hadi. Since then more than 2,000 have been killed in the violence.

The Arab alliance and the West claim the Houthis are supported by Iran, something Tehran denies.