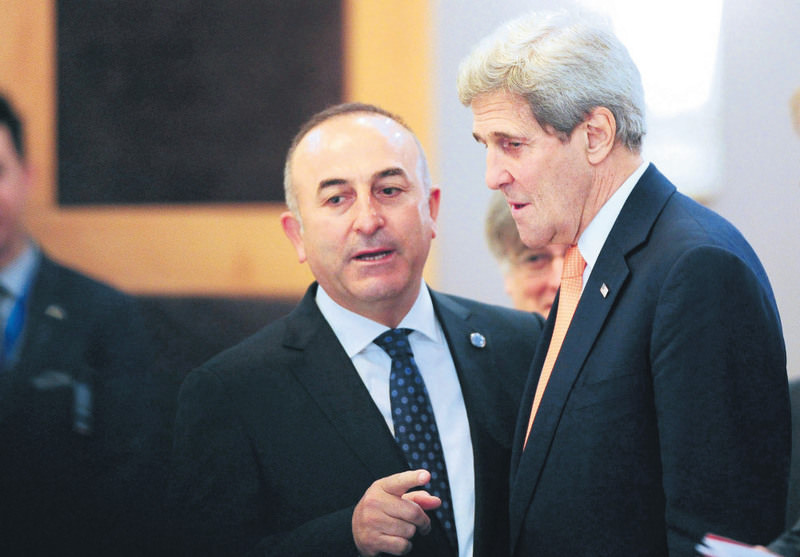 Responding to Obama criticizing Turkey for not fully ramping up the capacity needed to prevent the flow of foreign fighters to Syria, FM Çavuşoğlu said Turkey deported more than 1,300 people, while despite strong security measures, 85 percent of illegal attempts to cross from Mexico to the U.S. are successful

Responding to U.S. President Barack Obama criticizing Turkey for not fully ramping up the capacity needed to prevent the flow of foreign fighters to Syria, Foreign Minister Mevlüt Çavuşoğlu said Turkey deported over 1,300 people while despite all security measures, 85 percent of illegal attempts to cross from Mexico to U.S. are successful. On Tuesday, Obama asked for better cooperation between the U.S. and Turkey, flustering Turkish officials whose Justice and Development Party (AK Party) lost the majority in Parliament following the general elections on Sunday.

U.S. Secretary of State John Kerry and other ally countries' top diplomats thanked Turkey at every opportunity for its efforts to stem the flow of foreign fighters, Çavuşoğlu said, and added that Turkey shares a 911-kilometer border with war-torn Syria. "Unfortunately, despite all measures, some pass the border," Çavuşoğlu said, noting that he compared the situation to the U.S's border with Mexico at a meeting with Kerry.

"We are still seeing thousands of foreign fighters flowing into, first, Syria, and then, oftentimes, ultimately into Iraq. And not all of that is preventable, but a lot of it is preventable – if we've got better cooperation, better coordination, better intelligence," Obama said. He criticized Turkey on this front for the first time following the critical elections that have pushed the country in an unpredictable game of forming a coalition government between highly divided political parties.

Statistics compiled by the Prime Ministry support the long-standing Turkish stance that Turkey had been using its full capacity to block the flow of foreign fighters trying to go to Syria. According to the figures, more than 1,350 people have been deported and Turkey has issued exclusion orders for some 13,500 others from 98 countries. Turkey captured over 50,000 people who were trying to cross the borders illegally in 2013, 71,000 in 2014 and 23,500 others in the first five months of this year.

Turkish officials, who have requested more support from the West at every opportunity, are counting on more solid steps to stem the flow of foreign fighters. Çavuşoğlu had previously said one of the main problems is that individuals who are deported from Turkey keep returning, and highlighted the refusal of some countries to take the issue seriously.

As part of Turkey's efforts, the police force has tightened security at transfer points such as airports, terminals, bus stations and rental car companies with a special risk analysis system, and a team tasked with tracking suspicious foreigners who travel to Turkey for the first time and those who are minors and have no hotel reservation.

Those deported from Turkey were of different origins varying in age from 15 to 35. The suspected foreign fighter hopefuls claimed that the purpose of their visit was work, tourism or visiting friends or relatives, but security forces who had suspicions about the possibility of them joining the Islamic State of Iraq and al-Sham (ISIS) sent them back to the countries from where they had traveled.

Furthermore, the train-and-equip program for moderate Syrian opposition forces is proceeding according to plan in Turkey's Kırşehir province and the U.K. has extended its support to join in training opposition fighters together with Turkey and the U.S., Çavuşoğlu recently said. Commenting on the recent developments of the train-and-equip program, he said: "The program has begun in Turkey and Jordan. It will also begin in Saudi Arabia and Qatar, where logistical preparations are currently underway." Underlining that the training is being held in Kırşehir only, Çavuşoğlu further indicated that the number of participants has reached several hundred. Çavuşoğlu also said the U.K. has asked to support the program. "In principle, we are open to British support, but we [Turkey and the U.K.] have not decided upon the area in which it would give support." He reiterated that the program for Syrian opposition forces is not enough on its own. "All kinds of alternatives are possible, including a military operation," he added. In response to the question of whether protection will be provided to those train-and-equip forces with airstrikes, and whether Turkey or the U.S. would carry out such airstrikes, he said Turkey has been wanting to establish a safe zone from the very beginning.
Last Update: Jun 10, 2015 10:42 pm
RELATED TOPICS