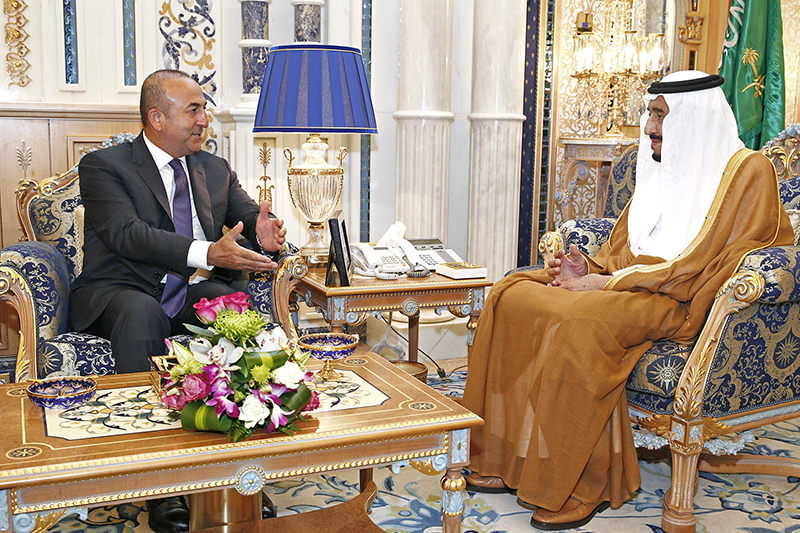 | AA Photo
by Fatih Şemsettin Işık Jun 17, 2015 12:00 am
Foreign Minister Mevlüt Çavuşoğlu was received by King Salman of Saudi Arabia to hold talks on bilateral relations alongside the latest developments in Yemen, Syria and Egypt at Jeddah on Wednesday.

According to the state-led Saudi Press Agency (SPA), Çavuşoğlu and Salman "discussed aspects of bilateral cooperation between the two countries and reviewed the latest developments in the regional and international arenas." Yunus Demirer, Turkey's ambassador to Riyadh also accompanied the Turkish delegation, SPA reported.

Despite several rifts that have been witnessed in the two countries' relations following the Egyptian military's toppling of Egypt's first democratically elected president, Mohammed Morsi, in 2013 with a coup led by then top general and current president, Abdul-Fatah el-Sissi, and Turkey's anti-coup stance in the region, the change in the Saudi throne has paved the way for recovering relations.

Starting with President Recep Tayyip Erdoğan's attendance at the funeral of previous Saudi King Abdullah in January, the process in which both countries could find the opportunity to retrieve reciprocal ties has been unveiled in Salman's term. Concerning the thawing of relations, upon his returning from an African tour in January, Erdoğan said: "There are topics that we agree on. On Egypt as well as on Syria and Palestine there are issues where we don't see eye to eye. We don't want such differences to cloud bilateral ties," and added: "As King Salman said, we need to work together to ensure there is unity and cooperation in the Muslim world. Turkey and Saudi Arabia need to work together."

Furthermore, following the crisis that erupted in Yemen, Turkey condemned the Iranian-backed Houthi militias' overthrowing of the legitimately elected Yemeni president, Abd Rabbuh Mansur Hadi, and declared its support for a Saudi-led military operation accompanied by the Gulf Cooperation Council in March.

On his official Twitter account, Çavuşoğlu announced his meeting with the Saudi king and said: "Received by King Salman Bin Abdulaziz Al Saud of Saudi Arabia. Conveyed the greetings of President Erdoğan and Prime Minister Davutoğlu."