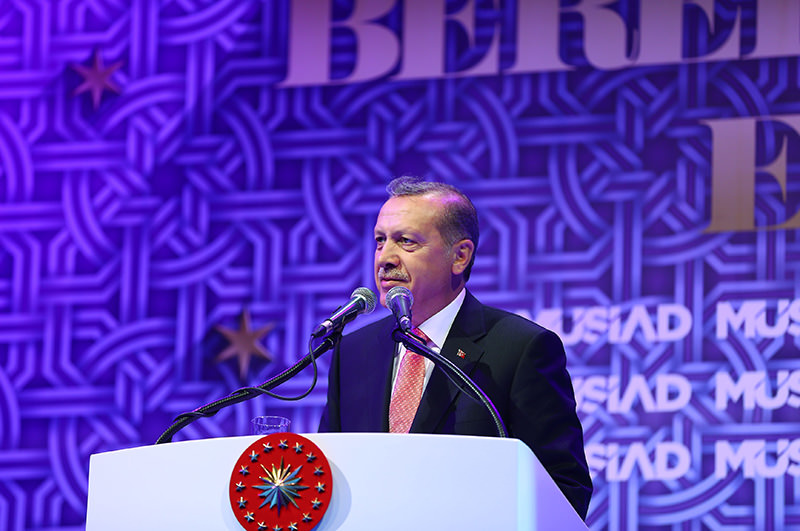 | AA Photo
by Daily Sabah Jun 22, 2015 12:00 am
Six major newspapers in Germany have recently accused the Turkish President Recep Tayyip Erdoğan of threatening the opposition parties. This accusation comes from Erdoğan's statement that, in the case that a government in Turkey could not be formed within the allocated legal time period determined by the constitution, the country would have no option but to enact an early election. What the newspapers were missing, however, was that Erdoğan was simply stating the scenario Turkey would face should no coalition or minority government form within 45 days of the June 7 parliamentary elections.

According to the official results of the 2015 Turkish parliamentary elections, no party could form a simple majority in the parliament, forcing at least two out of four parties that passed the threshold – which is 10 percent of the votes – to collaborate with one another in order to form a coalition or minority government. In the previous few weeks, Turkey has been fervently discussing what kind of an outcome will result out of such a collaboration. And in case no party can agree on a common ground, the constitution gives the Turkish president the authority to call an early parliamentary election. That election would have to be held 90 days later.

Turkish President Erdoğan has been sharing this inevitable outcome with the public were it the case that the parties could not come to an agreement within the 45 day-period, which was interpreted by six major German newspapers (Die Welt, Frankfurter Allgemeine Zeitung, Süddeutsche Zeitung, Stern, Der Spiegel, and FOCUS) as though Erdoğan had been pressuring Republican People's Party (CHP), the Nationalist Movement Party (MHP), and the Peoples' Democratic Party (HDP) into a coalition with the ruling Justice and Development Party (AK Party).

The German dailies claimed Erdoğan was saying that he could take the country into early elections if one of the aforementioned three parties did not form a coalition/minority government with the AK Party. However, such a statement does not reflect the truth since the Turkish president is given the authority to call an early election only when no possible coalition is scenario realized, therefore not in any way crossing out the opposition parties' chance of cooperating with one another.

The actualization of such a scenario in which opposition parties cooperate with one another might not be though possible for Turkey right now. Any coalition excluding AK Party has to include all of the three opposition parties (CHP, MHP, HDP) whose total number of deputies are just enough (with 292) to pass the threshold of 276 seats, the bare minimum to form a government in parliament. The right-wing MHP, however, has ruled out such a possibility several times over the course of weeks, as its nationalist ideology clashes with that of the pro-Kurdish HDP.