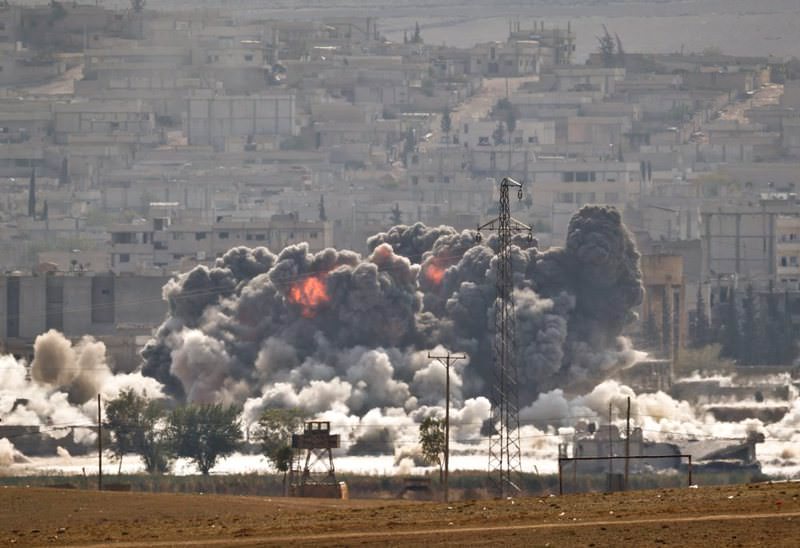 The U.S. continues pounding ISIS positions in Syria with airstrikes to dispel the militants, but recent Pentagon data revealed that most of the airstrikes supported Kurdish forces to combine the cantons in Syria, which Ankara fears will jeopardize Turkey's security

The U.S.-led coalition's bombing campaign in northern Syria is supposedly conducted to help all groups fighting the self-proclaimed Islamic State of Iraq and al-Sham (ISIS), however figures show that two-thirds of the airstrikes were in support of the militias loyal to the Kurdish Democratic Union Party (PYD), which is the terrorist PKK's Syrian wing, and is directly facilitating the group's aim to link all the self-declared Kurdish cantons cleansed from Arabs and Turkmens to found a continuous Kurdish state in the north of Syria.

According to data from the U.S. Central Command, in the last 10 months the alliance has conducted a total of 4,624 airstrikes against ISIS targets – 2,850 inside Iraq and 1,774 in Syria. The U.S. has conducted 3,596 of the strikes with 1,930 in Iraq and 1,666 in Syria. The remaining 1,028 airstrikes have been conducted by coalition partners Australia, Bahrain, Belgium, Canada, Denmark, France, Jordan, Netherlands, the UK, Saudi Arabia and the United Arab Emirates.

Coalition forces have coordinated airstrikes inside Iraq with the Iraqi government, but in Syria there is no single force contributing to intelligence sharing for ISIS targets, which raises a question about how the coalition is conducting airstrikes inside the country.

Unlike in Iraq, anti-ISIS forces in Syria are diverse with different agendas that caused the U.S. to drag its feet on conducting airstrikes there. The strikes on ISIS targets in Syria began in September, one month after similar action in Iraq, following weeks of debate in the U.S.

The debate about airstrikes in Syria has heated up as the Kurdish Democratic Union Party PYD's military wing – the People Protection Units, known as the YPG – recently captured the northern Syrian city of Tell Abyad and allegedly forced local Arabs and Turkmens from their lands while uprooting ISIS from the last piece of Syrian land bordering Turkey. The PYD is considered by Turkey as an extension of the outlawed PKK that has fought against Turkey for decades.

By capturing Tell Abyad, Kurdish forces connected the two pieces of land they have controlled in northern Syria along the Turkish border, which Kurdish rebels call the Jazirah and Kobani "cantons."

Last year, Kurdish rebels declared three areas in northern Syria as Kurdish "cantons." They call the area around al-Afrin city in the northwest corner "Afrin Canton," the area around the city of Ayn al-Arab – a few hundred miles east of al-Afrin – as "Kobani Canton" and the area covering the cities of Tal Hamees, al-Hasakeh, al-Qamisli and Ra'sal Ayn as "Jazirah Canton."

It's no secret that the success of the YPG in connecting the forces in these two areas is due in part to the intense coalition airstrikes. But Syrian opposition groups that are also fighting ISIS and Syrian President Bashar al-Assad's regime claim that Kurdish rebel groups have exploited the airstrikes for political reasons in northern Syria.

The groups say Kurdish forces are lining up in the north to found a Kurdish state or a full autonomous region. More than a dozen Syrian opposition groups released a statement last week accusing the PYD of ethnically cleansing Turkmens and Sunni Arabs.

"YPG forces have implemented a new sectarian and ethnic cleansing campaign against Sunni Arabs and Turkmens under the cover of coalition airstrikes, which have contributed to the bombardment, terrorizing civilians and forcing them to flee their villages," according to the statement.

The U.S., which supports the PYD under the pretext of fighting ISIS, has avoided helping other Syrian opposition forces, the statement noted. Of the 1,774 airstrikes in Syria, the coalition has conducted 1,187 in areas where the Kurdish YPG group has been fighting. A Pentagon official told Anadolu Agency that the coalition had been trying to cut off supply lines to ISIS's self-declared capital of al-Raqqa in northeastern Syria, as well as choke the group inside Syria to prevent the militants and equipment from moving into Iraq. As Kurdish forces lined up in northeast Syria, they contributed to the strategy of cutting off supply lines in the north, according to the official.

But he noted the increasing visibility of the militant group's targets in Kurdish-controlled areas and Kurdish fighters' willingness to battle ISIS also contributed to the coalition's decision to intensify airstrikes in these areas.

Another Kurdish-controlled area where the coalition has conducted more than 250 airstrikes was the self-declared "Jazirah Canton" – an area that covers the northeastern corner of Syria around the cities of Tal-Hamees, Qamisli and Al-Hasakeh.

As Kurdish rebels moved west to connect their forces in the self-declared Jazirah and Kobani "cantons," the coalition has followed with intensive air support.
Last Update: Jun 24, 2015 7:46 pm
RELATED TOPICS