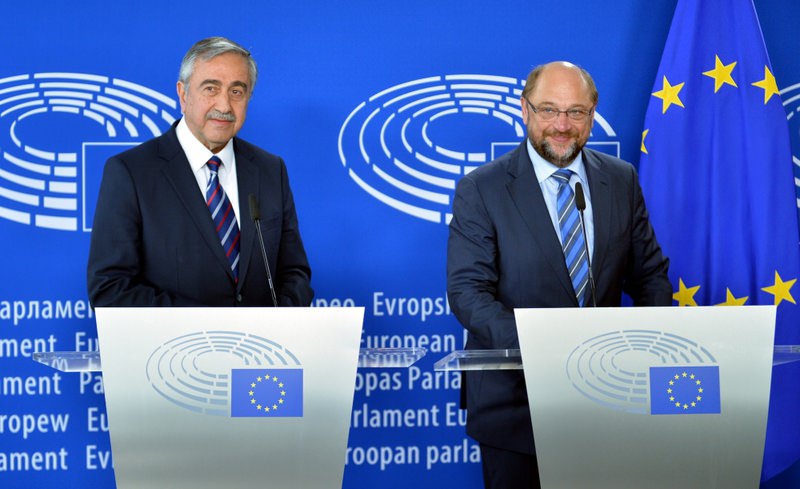 by Daily Sabah Jul 02, 2015 12:00 am
Turkish Cypriot President Mustafa Akıncı on Wednesday called for Europe's support in reuniting the divided island in a meeting in Brussels with Martin Schulz, the president of European Parliament.

Speaking at a joint press conference in Brussels with Schulz, he said: "We want a solution for our people, we don't want the continuation of the status quo. We are approaching the final destination and I am convinced that the European Parliament will be supportive."

Akıncı said that after being outside international law for many years they wanted to be a part and parcel of Europe. "We want our community to be part of the European family," he added.

Schulz told reporters in Brussels: "It is in the highest interest of the EU that talks are successful," after his meeting with Akıncı. He added that they will "do whatever is responsible to contribute to success. We are hopeful this is our window of opportunity."

Akıncı was scheduled to stay in Brussels until Friday for meetings with EU officials.

Akıncı and Greek Cypriot President Nicos Anastasiades are due to meet again on July 10 for negotiations. Both of the leaders will also attend a discussion session organized by both sides' chamber of commerce on July 8.

European Parliament, in its recent report had called on Turkey to begin withdrawing its troops and transfer the abandoned resort city to the U.N.

Akıncı has recently said that the ongoing Cyprus peace talks aim to construct a framework during a U.N. meeting in September in New York where the guarantor countries would also join. According to the 1960 Treaty of Guarantee, Turkey, Greece and the U.K. are named as the guarantor countries of the island's Turkish and Greek Cypriot communities.

On June 17, the Turkish and Greek Cypriot leaders along with U.N. special adviser for Cyprus Espen Barth Eide gathered at the U.N. Good Office on the island for their third meeting. The next meeting on June 29 will be the fourth such meeting between the two sides.

Political tensions on the long-divided island have eased since talks resumed on May 15.

On May 28, the leaders agreed to a five-step plan to resolve the Cyprus issue following a meeting hosted by Eide. These steps include opening more crossing points, interconnecting power grids, allowing cell phone interoperability on both sides of the island, resolving the issue of radio frequency conflicts and forming a joint committee on gender equality.

Peace talks were unilaterally suspended by Greek Cyprus last October after Turkey issued an advisory on behalf of Turkish Cyprus for seismic research off the southern coast of Cyprus.

Turkish leaders have consistently affirmed that they are determined to bring a permanent resolution to the conflict on the divided island and have urged the international community to contribute to peace.
Last Update: Jul 02, 2015 8:25 pm
RELATED TOPICS