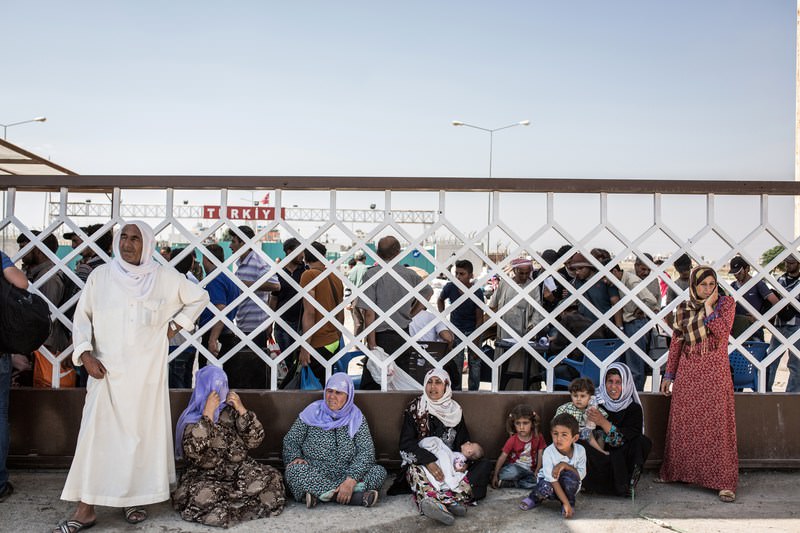 by Anadolu Agency Jul 03, 2015 12:00 am
Turkish Foreign Ministry has urged the international community to act to stop the self-proclaimed Islamic State of Iraq and a-Sham (ISIS) and the Bashar al-Assad regime before it may result in another huge influx of Syrian refugees into Turkey.

ISIS is currently pushing its forces into the Syrian town of Mare and Azaz regions of Syria's Aleppo governorate.

"In this region, there are at least four million people. So, it is important that the Syrian regime and ISIS should be stopped and Syrian people should not be pushed towards the Turkish border," Tanju Bilgiç, ministry spokesman, said at a press briefing in Ankara on Friday.

He added that Turkey was worried about the influx of refugees. "Recently, this concern has been heightened. Following this influx, the burden on Turkey's shoulder would increase. We call on the international community to act," he said.

Turkey is already hosting around two million Syrian refugees at a cost of an estimated $2.6 billion.

The spokesman added that Ankara was in talks with the U.S. to create a no fly zone and a restricted area within Syria territory where people displaced by the war could find refuge.

Bilgiç also criticized the pro-Kurdish Syrian Democratic Union Party (PYD) for its alleged attempts to change the demography in certain parts of Syria.

"Turkey will not accept the party's demographic operations and its creation of de facto situations. In fact, our concerns are very well known by the PYD," he said.

Turkey designates PYD as a terror organization. The Syrian Kurdish group recently captured the northern Syrian town of Tal Abyad that fuelled concerns that the group is aiming to found an independent Kurdish state or a fully autonomous region in the area. The People's Defense Units (YPG), the PYD's military wing, captured the border city on June 15 with the help of U.S.-led coalition airstrikes on Daesh targets.

About media reports that Turkey may intervene directly in Syria, Turkish Prime Minister Ahmet Davutoğlu clarified in a televised interview Thursday that Ankara would never take a step that would put the entire country at risk and allow the formation of "threatening structures" on Turkish borders.

Davutoğlu added that while his government would not panic and put Turkey into a war, it would also not remain unresponsive.