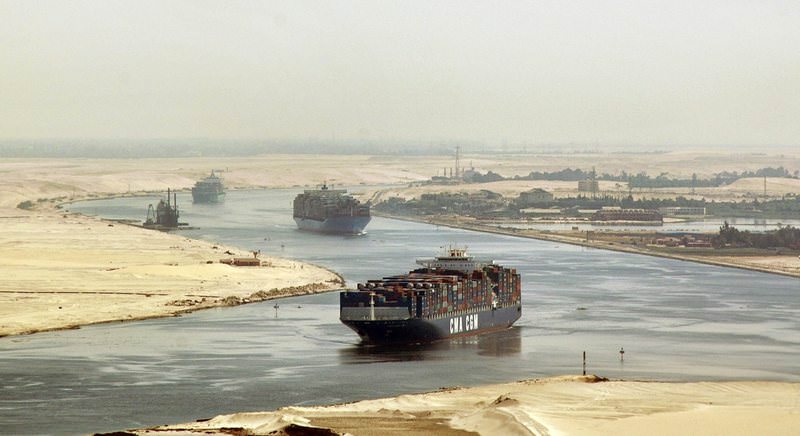 by Daily Sabah Jul 16, 2015 12:00 am
Egypt has invited Turkey to join the inauguration ceremony of the new segment of Suez Canal, Egyptian Foreign Minister Sameh Shoukry said on Wednesday, according to the Egyptian daily Ahram.

"The inauguration of the new Suez Canal is an event related to international commerce and it is illogical to only invite specific countries to the ceremony," Shoukry added.

The minister further stated that every country in the world, including Turkey and Qatar, has been invited to attend the opening.

Following the July 2013 ouster of Egypt's first democratically-elected president Mohammed Morsi, and the subsequent human rights violations, diplomatic relations between Egypt and both Turkey and Qatar have been strained. Both countries are known for their support to the Muslim Brotherhood, and especially Turkish President Recep Tayyip Erdoğan has harshly criticized the coup and its leader al-Sissi and declared support for Morsi.

The Suez Canal is an artificial sea-level waterway in Egypt, which connects the Mediterranean Sea and the Red Sea. Opened on November 17, 1869 after a 10 year-long construction, the Canal allows ships to travel between Europe and South Asia without the need to navigate around the whole continent of Africa.

Once controlled by the French-owned Suez Canal Company, the canal is currently nationalized and under control of Egypt. After several enlargements, it has been expanded to 193.30 kilometers of length, 24 meters of depth and 205 meters of width.

Egypt recently dredged a total of 250 million square meters and dug 70 million square meters in the expansion of the Ballah Bypass for the new shipping route in the canal. The Bypass' width is now 312 meters, compared to the previous 61 meters. Now that the new segment of the canal has expanded to five times its original size, Egypt has decided to organize an opening ceremony.
Last Update: Jul 16, 2015 9:46 pm
RELATED TOPICS