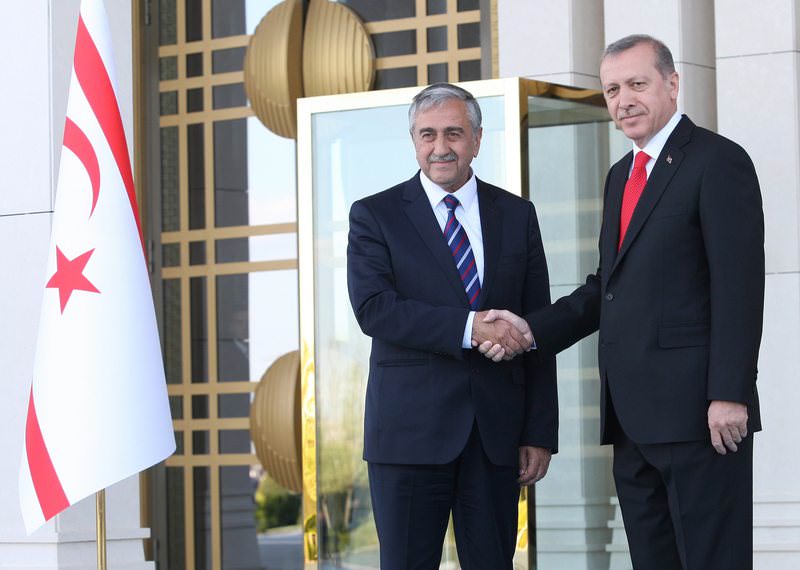 On his visit to mark Peace and Freedom Day in Turkish Cyprus, President Erdoğan said he saw how the peace talks to unite divided Cyprus are proceeding earnestly on both sides and that Turkey will continue its support for the promising efforts to reach a resolution

On a visit to the Turkish Republic of Northern Cyprus (KKTC) to attend the 41st anniversary of the July 20 Peace and Freedom Day, President Recep Tayyip Erdoğan said that Turkish and Greeks Cypriots should not miss the chance of resolving the Cyprus issue, as the stalled peace talks have never been as close to reaching a conclusion. He said he hoped for an equitable solution for both sides of the island, especially in the political sphere.Erdoğan, Parliament Speaker İsmet Yılmaz and Deputy Prime Minister Bülent Arınç visited Turkish Cyprus upon the invitation of Turkish Cypriot President Mustafa Akıncı to mark the 41st anniversary of the July 20 Peace and Freedom Day. Speaking at a press conference following their meeting, Erdoğan said the two leaders exchanged positive views on the peace efforts of both sides and said he could sense determination on both sides to reach a resolution.

"I believe this opportunity should not be missed," Erdoğan said, adding that Turkey would prop up the process, which saw setbacks in previous years, and said the process needs a fair conclusion. He said that the outcome of the talks should especially provide political equality.

"[Turkey], as a guarantor state, will do what we need to do and continue our work toward modernizing the 'baby land' [Turkish Cyprus]."Akıncı also conveyed positive messages saying: "We have shared Cyprus's current and previous generations' pains. Let the next generations share peace."

After assuming the presidency, Erdoğan paid his first official foreign visit to Turkish Cyprus on Sept. 1, 2014.

The island was divided into a Turkish Cypriot government in the northern third and a Greek Cypriot government in the southern two-thirds of the island after a 1974 military coup by Greece was followed by an intervention by Turkey as a guarantor state. Border gates between Turkish Cyprus and Greek Cyprus were opened on April 2003. Mediators have sought unsuccessfully for years to end a deadlock and reunite the island as a two-zone federated state.

On May 28, leaders agreed on a five-step plan to resolve the Cyprus issue following a meeting hosted by U.N. special envoy Aspen Barth Eide. These steps included opening more crossing points, interconnecting power grids, allowing cellphone interoperability on both sides of the island, resolving the issue of radio frequency conflicts and forming a joint committee on gender equality.

Peace talks were unilaterally suspended by Greek Cyprus last October after Turkey sent an exploratory ship on behalf of Turkish Cyprus to conduct seismic research off the coast of Greek Cyprus.

Present negotiations would be assisted by an EU technocrat to ensure that any arrangements be in conformity with EU rules and regulations, Akıncı said. Anastasiades declined to specify in what particular areas convergences had started emerging. At present, negotiators appointed by the two sides are looking at governance and property issues and at potential territorial adjustments in a future federated state. "Some progress has been observed on the chapters that are being discussed," he said. The sides will continue to pursue low-level confidence-building measures, but in a manner that would not detract from the key issue of finding a deal.