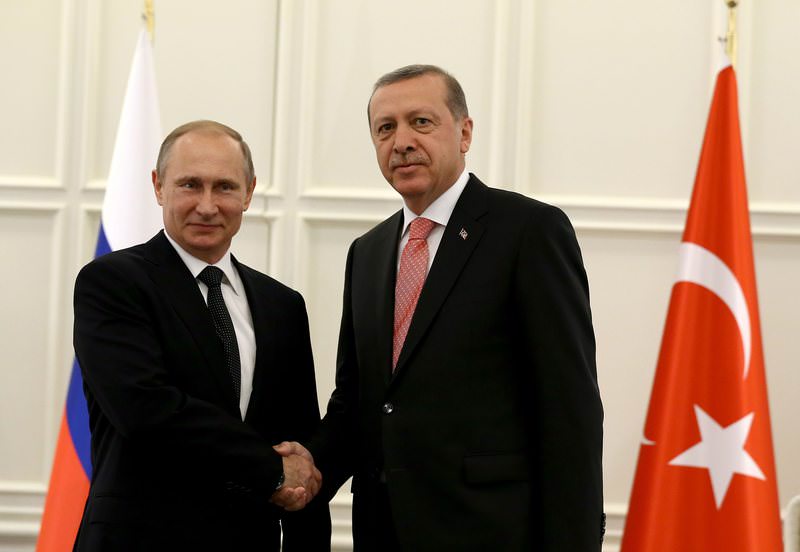 by Daily Sabah with AA Jul 27, 2015 12:00 am
Turkish President Recep Tayyip Erdoğan and Russian President Vladimir Putin held phone talks on Sunday in which the Turkish leader expressed his determination in the fight against ISIS (the self-proclaimed Islamic State of Iraq and al-Sham) and outlawed PKK.

Erdoğan, describing ISIS as "a virus spreading all across the region", said Turkey would fight against all terror organizations to the very end.

Reminding that Turkey has informed the UN Security Council, in light of article 51 of the UN Charter, about the steps taken to fight against ISIS, Erdoğan called on the international community to make an effort to establish a transitional government fully-supported by the public.

He also stressed that the fight against the PKK would continue unless the terror group brings an end to its terror attacks in the country.

Stating that cooperation in combatting terrorism was essential, the Russian President also conveyed condolences to the families of Turkish victims killed in the recent terror attacks.

The presidential sources also stated that Erdoğan and Putin agreed to hold a bilateral meeting in November's G-20 Summit in Antalya, while also expressing the wish to cooperate closely on regional issues.

Erdoğan later on Sunday also had a separate phone conversation with Iraqi President Fuad Masum at the request of Iraq, said presidential sources.

Masum agreed with Erdoğan's determined manner in the fight against terrorism and said the violence the PKK instigates badly affects the peace in the region.

With dozens of citizens dying in a wave of terror attacks, Turkey has been experiencing a very bitter week.

On Wednesday, two police officers were found shot dead at their shared home in Şanlıurfa's Ceylanpınar district -- an attack for which the PKK terrorist organization claimed responsibility.

A day later, another policeman was killed in a gun attack in Diyarbakir.

On Friday, another police officer was kidnapped as he was heading from Mardin to Muş with his family on the Diyarbakir-Bingöl Highway, police said.

The country has started operations against ISIS and the PKK in northern Syria and Iraq.