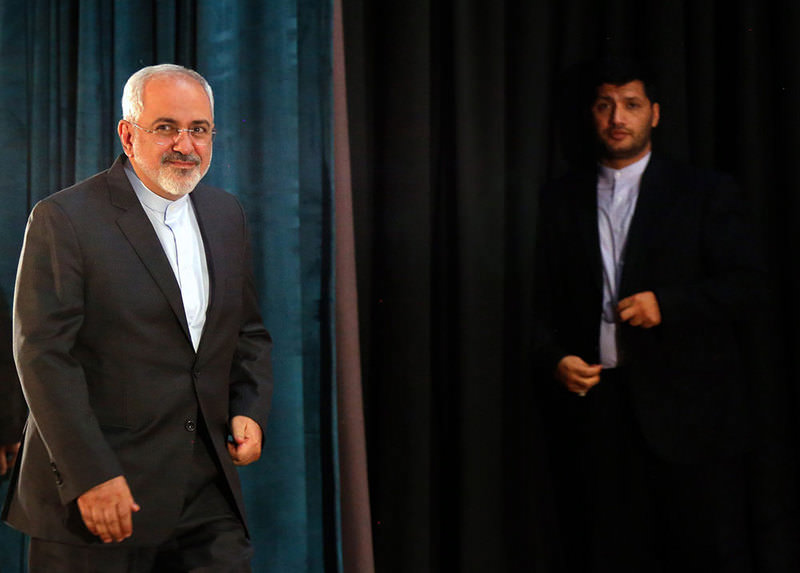 by Mehmet Ali Berber
Aug 11, 2015 12:00 am
Iranian Minister of Foreign Affairs Mohamed Javad Zarif's visit to Ankara was postponed on Tuesday due to President Recep Tayyip Erdoğan not giving an official appointment. It is alleged that several developments affected Erdoğan's decision, including Iran's Syrian policies, criticizing Turkey's operations against the PKK, sectarian policies of the country in the region and a smear campaign in which Turkey is accused of supporting the Islamic State of Iraq and al-Sham (ISIS).

Iran supporting Syrian President Bashar Assad and pursuing policies to trigger sectarian clashes in the region is shown as the main reason for rising tensions in Turkish-Iranian relations.

Iran's critical statements of Turkey's fight against the PKK caused eyebrows to rise in Ankara. The Tehran-based smear campaign against Turkey became the last straw and Ankara warned Tehran due to reports by Iranian media outlets that accuse Ankara of supporting ISIS.
The most important reason for Ankara's reaction is seen in Iran's sectarian policies in Syria and the region. As Iran becomes insistent in its pro-Assad policies, an aggressive attitude of moving sectarian clashes into Iraq and Yemen is applied by the country. Ankara had spoken out against Iran's regional policy saying that it disturbs regional stability, but was trying to keep relations unharmed.

However Iran's "hostile" statements about Turkey regarding the fight against the PKK changed the state of affairs. The Iranian administration declared its uneasiness about Turkey's cross-border operations against ISIS and the PKK and the media outlets in the country proclaimed these issues as "Turkey attacking Syrian territory under the pretext of terror" in several reports that claim the operation consolidated ISIS. Ankara was unsettled when Iranian Chief of General Staff Hassan Firouzabadi said: "The mistake that the Turkish government has made in recent days and attacked the Kurds who resisted against ISIS, under the cover of an assault on ISIS terrorists will facilitate the access routes of takfiri terrorists to the Turkish borders."

The smear campaign against Turkey by Iranian media outlets, which has been ongoing for a while, triggered Ankara's decision. It is known that Press TV, a pro-Revolutionary Guards channel, has been accusing Ankara of supporting ISIS. There have also been similar reports published by the state-run Fars News Agency (FNA).

Kayhan daily, which is close to Supreme Leader Ali Khamanei, made the same accusation in a caption: "Turkey, Saudi Arabia and Qatar: ISIS's Central Headquarters," and claimed in another article that Turkey had allied with ISIS against the Syrian regime and reached a secret deal with the organization to not organize a terror attack in the country. Again the newspaper claimed that Erdoğan prevented aid from reaching Kurds in Kobani who were fighting against ISIS.

On top of that, Ankara did not find Iran's "not giving up" on such reports and statements, which were denied both by Presidential Office and Foreign Ministry, as "well-intentioned" and these made a fuss in bilateral relations.

Along with the dissidence in Syria the two countries also had opposing policies about the conflict in Iraq. Turkey has voiced its concerns over the presence of Iranian commanders in Iraq leading the Iraqi security forces as well as of the Iranian-backed Shiite militias, which have frequently been accused by the U.S., rights groups, and Sunni groups of targeting innocent Sunnis.

Another dispute is over the coup by the Iranian-backed Shiite Houthi rebels in Yemen. Turkey explicitly pledged its support to the Saudi Arabia-led coalition that hits Houthi targets and aims to restore the internationally recognized and elected government and directed its criticism to Iran for its role in the mayhem that took place when Iranian-backed Houthis tried to topple the elected president, Abd Rabbuh Mansur Hadi.

In March, President Erdoğan also called Iran's efforts to dominate the Middle East "intolerable" and that its sectarian policies are disturbing the region. He also blamed Iran for supporting Syrian President Bashar Assad, saying that a foreign policy that "sides with the killer of 300,000 people" in Syria is not acceptable. "Iran has to change its view. It has to withdraw any forces whatsoever it has in Yemen, as well as in Syria and Iraq, and respect their territorial integrity," Erdoğan said.